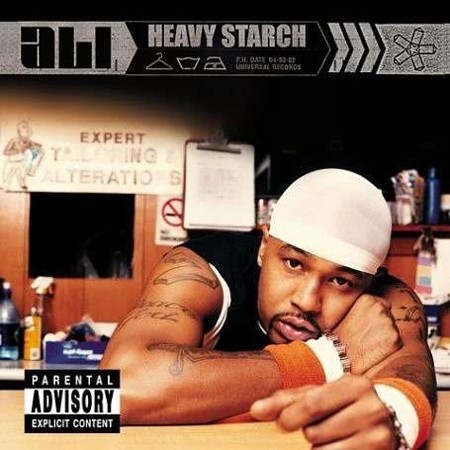 The story has been oft written and told in rap journals and trade publications: even though Nelly blew up as a solo rapper with his song and album “Country Grammar,” the plan was originally for the St. Lunatics to come out as a group all along. Nelly was pushed to the front because he had the charisma and star power, and once he had kicked down the door he was able to bring the rest of the crew in. While the group’s major label debut “Free City” was somewhat hit or miss, it did feature the anthemic song “Midwest Swing,” and this song like many others in the Lunatics family gave Big Lee a.k.a. Ali a chance to shine his stuff.

“I’m sittin’ on the front porch, writin a hood rhyme
Waitin on my connect to deliver that good line
Wish I would find, one seed in my weed
Sticks and shit, if I do somebody bleed
Pull right here, eight pounds of Chinamen
Two stay hittin some blunts and Heineken
Hidin in the back with the po’ po’
kicked in my do’do’, man they some ho’ hooo’s”

Like Nelly before him, Ali is not afraid to emphasize his St. Louis roots by putting extra emphasis on his “urr” when he says the cops put a gun to his “earr” or that not a man does he “fearr.” Other than that, Ali is just like any other rapper from the Midwest out to make a name for himself in the increasingly diversified national rap landscape. With his debut solo album “Heavy Starch” Ali gives it his best shot, thanks to some help on beats by long time Lunatics affiliated Jason ‘Jay E’ Epperson, with a few scattered productions by others such as “I Got This” by Waiel ‘Wally’ Yaghnam. Keeping the production tight with the sound that made Nelly a crossover hit was not a bad decision, as it makes “Heavy Starch” a nice album to bump in your headphones or while driving around.

Ali’s rumbling vocal tones are another positive asset of this CD, as it allowed him to be distinctive both among his Lunatics peers and as a rapper going for delf. A good vocal tone would be meaningless without the flow, but Ali has no problems here whether the beats pick up like “Passin’ Me By” (featuring Toya) or slow down like “Ore-Ore-O.” Good flows would mean nothing without good writing though, and Ali sometimes slouches a bit but is willing to get serious on songs like “Bitch.” The title may mislead you a bit, but these lyrics won’t:

“I came up with field niggaz with war wounds, true alivers
I love Destiny but they ain’t got nuttin on this +Survivin+
Fuck Christmas, fuck wishin; listen roaches just missin
Hatin school cause they dissin, sleepin in the kitchen
You need at least one parent on drugs to feel half our struggle
This ain’t pain it’s muscle, stand up, Mase ain’t a hustle
Lil’ nigga I was gettin wet, young threat
Too much of a cat for a McDonald headset
Mama havin breakdowns, Keisha got cancer
Poor, no insurance, I’m thinkin crime is the answer”

The key to this album ultimately is the music though. If it had been generic Ali’s album would have come and gone, but the tinkling pianos of “Beast” show that Jay E chose the music carefully and very well. The group songs featuring the Lunatics seem to benefit the most, such as the heavy bass bottoms of “Cool as Hell”, the swinging dedication to haters on “No” and “Wiggle Wiggle” – sure to be a dance club anthem REAL soon. No one would argue this is the greatest rap album of all time or that Ali would be well-known if Nelly hadn’t come first, but on “Heavy Starch” he provides enough justification to keep this CD in your summer rotation.