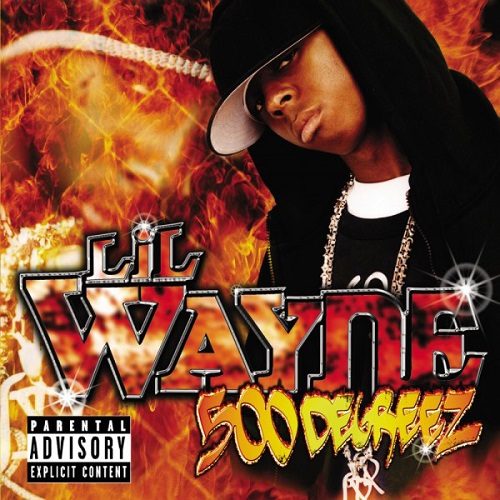 This rap star is about as “Lil” as Kim. He may still be a young rapper, but with his third full-length album “500 Degreez” he’s now definitely a veteran of the music industry. Hold up whodi, doesn’t that title sound familiar? Former Cash Money rapper Juvenile released an album called “400 Degreez” back in 1998. Does this mean they believe Lil Wayne is a hotter rapper than Juvenile, or is intended to be a slap in Juvey’s face for leaving a crew he once called his family – or BOTH?

Whatever controversy the label intended to stir up, the artist known as Wheezy still has to prove he’s got the credentials to heat up the mic regardless of the title’s temperature. With Mannie Fresh producing the entire album save for two tracks, and those other two being produced by Jazze Pha, Wayne’s definitely off to a good start. Fresh didn’t exactly reinvent the wheel on “Way of Life” though, the album’s first single. If you’ve been listening to rap music for more than three or four years, you’ll recognize both the beat it uses and the allusion to Junior M.A.F.I.A.’s smash hit “Get Money” at the beginning. Wayne’s lyrics aren’t breaking new ground either:

“Ay let me slide in the Benz with the fished-out fins
Hit the mall wit my girlfriends dish out ends
Cause you know it ain’t trickin if you got it
Copped baby girl what she desired; it’s chump change ma
Marijuana scholar – know what I got
up in my styrofoam cup? That purple stuff
It was given to me at birth to stunt
So that’s why I cop the Bentley with the leather and the furry cups”

The song itself is likely to stay in rotation on turntables and music video shows, just because it sounds familiar and the topic matter is some inoffensive if uncreative ballin’ and flossin’. The skit that follows it though featuring Big Tigger is totally unnecessary – a waste of a good Mannie Fresh beat; not to mention more than anybody wants to hear of Tigger when he’s already on Rap City every day as it is. Sadly they repeat this same mistake on track 8, and then use the same tired joke about “the fifth caller” on track 16 with a different DJ and a helicopter weatherman who sounds like a racist.

Why would Cash Money insert such bad interludes into an album in an attempt to give Wheezy some humor? Maybe they’re trying to compete with Cedric the Entertainer doing Nelly’s skits on “Nellyville,” but it’s more likely that it shows the topic matter is unengaging. “500 Degreez” has to be the 500th rap album to include a song called “Fuck You” and it’s no more refreshing a sentiment than it was the first 499 times. “Gangsta and Pimps” as a title ought to tell you what you need to know; if you guessed the chorus had the words “lobster and shrimp” in it you’d be absolutely correct. “All I need, is women and weed” croons a generic singer, who is accompanied by a man who either thinks he’s Michael Jackson or is screaming because his appendix burst. It’s hard not to enjoy the twonk of Mannie’s beats on “Lovely” but Wayne won’t win any points for his braggadocio:

“If she ain’t givin love to the whole squi-dad, get outta here
You people love this shit I pop in ya ear
You’re gonna love the shit that I do to hip-hop this year
You’re gonna love when I bring it back to the block this year
I represent the Biggie and ‘Pac era, you gotta love me
and I know ma love me just cause I got a lot of money”

Comparisons to Notorious B.I.G. and Tupac Shakur are suspect; comparisons to Juvenile given the album’s title however are to be expected. Juvenile and Wayne both brag about their success; but Juvenile isn’t afraid to rap about the seamy as well as the shiny. Juvenile’s comedic writing as exemplified by songs like “Ha” and “Momma Got Ass” shows that he’s also more than a hood narrator, he’s an entertainer. Wayne on the other hand is constantly trying to impress us that he can “Go Hard” with some “Gangsta Shit” when he’s not out to “Get That Dough.” If he didn’t already seem insecure, he practically begs people to notice how big of a star he is with “Look at Me” even though as a successful member of Cash Money Records he’d be noticed WITHOUT the extra flossing.

On a Big Tymers record like “Hood Rich” a lack of interesting rhymes is somewhat forgiveable; given that nobody expects a record label’s producers and owners to also be great MC’s. Wayne is being held to a higher standard though, because after releasing two albums he should be experienced enough as a writer to offer more. Wayne gives off the impression he’s coasting off his rep and Mannie Fresh’s beats. Because of the latter, this will continue to work at least for the present, but on any other label he would be perceived for the mediocre rapper he is. His monotone flow and monochrome rhymes just don’t shine. Ultimtely, the only hot thing about “500 Degreez” is the Fresh beats found within. It’s too bad stores don’t sell an instrumental version along with this one.