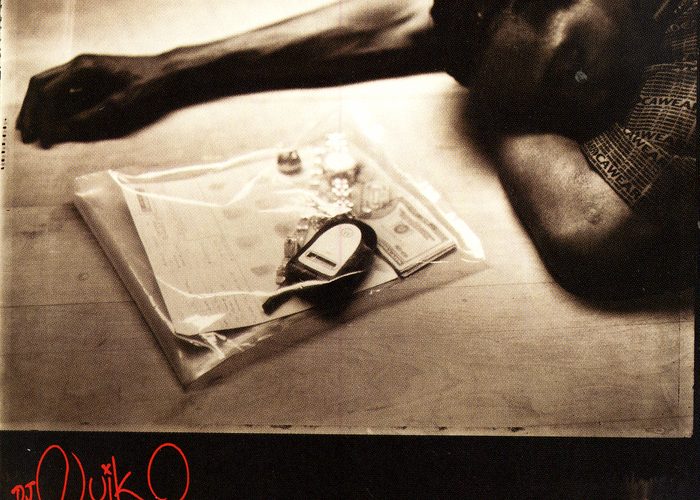 For some people talent comes so naturally that it makes you feel envy just hearing about it. It’s that feeling you get when you have a friend who is a great musician that also has paintings hanging in a gallery, or an accomplished athlete writes his own best-selling book. Sometimes you just get the feeling that when God was handing out talent, these people got in line twice and she never noticed.

DJ Quik would be one of those people. Over ten years ago, “Quik is the Name” shook the landscape of hip-hop from the West coast all the way to the East. Some albums are so well-produced you’d want to listen to them just as an instrumental, but Quik upped the ante by rapping over his own beats with his distinctively higher octave voice. Some compared him to Eazy-E right away, but this Cali funkster is into more than being a gangster. He wasn’t afraid to talk about his roots on hits like “Born and Raised in Compton” but the theme that dominated the album and the hits that followed was drinking, partying, and getting laid.

If it ain’t broke don’t fix it, and like Too $hort before him Quik has stayed relevant by always giving the people what they want. Whether he’s producing gems for artists like Xzibit and Truth Hurts (if you’ve heard the smash hit “Addictive” you know his sound) or blazing beats for his own songs, Quik’s formula has always been to keep the beats banging. In fact if Quik is “Under Tha Influence” of anything on his sixth album, he’s drunk on some straight up funk. Some songs will remind you of hits you already know, but with a whole new twist. “Murda 1 Case” featuring KK and Pharoahe Monch causes deja vu, and it’s because Eminem’s “Bad Influence” is a similar bass and piano drop, but Quik makes it all new. This song also proves he’s got no problem hanging with rap heavyweights; he’s not even afraid to get gruesome:

“We love that ‘Goodfellas’, ‘Scarface’, all that mafia stuff
But a few volumes of ‘Faces of Death’ get you coppin it tough
Look at the autopsy, where fly-swatters got mashed for miles
Writin checks that they insides couldn’t cash! (ewww)
Like raw steak, them vital organs they soft
Pharoahe Monch and K, like chrome they popped off
Chuckey the wicked, and me yeah Quik did it
The murder, the mayhem, like 40 we Sic’Wid’It!”

Musically and lyrically, Quik has no problem switching up styles and pulling off any type of shit in the hip-hop diaspora today. He and Hi-C handle the triple cadence rap and beat on “Ev’ryday,” the smoothed out “50 Ways” buils up a simple drum cadence into a guitar strummed survival story with Wanya Morris (Boyz II Men) on the hook, and “Put it On Me” with Dr. Dre is a straight up party anthem for suckin’ and fuckin’. Of course no DJ Quik album would be complete without a plain beat and no rap so you can get a hit of the sweet, and with “Quik’s Groove 6” he comes again. If your head ain’t nodding or your fingers ain’t tapping to the jazzy flow and funky saxophone, you probably just weren’t into soul music to begin with – so go buy a Pat Boone record.

Most albums have at least one thing you can complain about — too many skits, not enough beats you can ride to, or weak lyrics that don’t hold the weight up. Quik keeps the rhymes interesting though with a rotating array of guests from the mega-pimp Suga Free to the loquacious East coast verbalist Talib Kweli. Quik’s music as usual is top notch, a deliciously easy to ride to mix of hits. As for skits or interludes, there are none – the final track “Out” listed on the back cover doesn’t even exist in the mix if you try to forward the CD to 16. You don’t want to make that choice anyway though, because if you let the last song “Oh Well” keep playing for several minutes after it ends you’ll be treated to an unnamed bonus beat where Quik funks it up again and then personally thanks you for purchasing his album!

Yes sir, God was doing good work that day when she tapped a young David Blake on his head at birth and said, “You’ll grow up to create the hits that everybody in hip-hop loves.” Quik didn’t even need to be a stellar lyricist to be an all-time rap great – with his caliber of beats he could have rapped as well as the Big Tymers and still got over. Songs like the lead single “Trouble” though prove that even if he’s not considered in the same league as Biggie, Nas, Rakim or ‘Pac, there’s no shame in his game at all, and he can for damn sure rap his ass off:

“The walkie talkie, the 2-way and all of the above
Nightstick up yo ass ’til we all see blood
Fuck it, I’m a cop too (what?) I’ma cop me a kilo of yay
and try to get it crackin’ like it’s ’82 (ahh yeah)
With Monte Carlos and European firms; cop them El Co’s
on that gold lace dippin’ round the whole place (whole place)
Fuck a 6-pack nigga cop the whole case (whole case)
And when them marks come nigga crack they whole face
The way my glock cock, keepin niggaz full
got it spittin’ like that pitcher from the KC Royals
Socked the P.D., haters R.I.P.
Very sincerely yours – Quik nigga please!”

By turns humerous, clever, hardcore and smooth, the ubiquitous Quik never runs out of ammunition in his glock, his beats OR his raps. To put it quite simply, if you’re looking for the album you’ll have a hard time taking out of your CD changer, discman or car stereo for the entire summer, the perfectly timed “Under Tha Influence” will be the one.