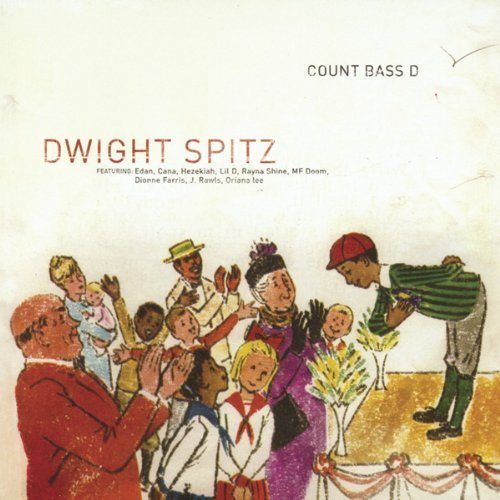 Backpackers huddle around his joints like those lost in the mountain wilderness would a campfire at night; and they bathe in the light and the warmth of his tracks. The problem metaphorically speaking is that most people are already in nice, warm, well-lit apartments, condos and houses. Your average thermostat havin’ muh’fucka probably hears the sound of the name Count Bass D and says, “Who’s this pretentious a**hole anyway? Some 100 syllables a minute, big nerd-ass dictionary rhymin’ El-P wannabe? Getdafuhgawtaheah wit’ dat shit!”

Their loss. Whether you live in a condo or on the corner of 42nd and Blondo, the world always has been a cold place for rap. Just because you can light a candle and hear some Fabolous doesn’t mean that a thermostat full of Bass D’s raps isn’t better. Come on in son, you’re freezin’ out there – let this album wrap around you like a nice warm blanket. The self-produced and nearly self-distributed Count Bass D ain’t just the latest lighter to ignite the stove either — he’s been around since the seminal “Pre-Life Crisis” was released on a Sony imprint in 1995. People love to talk about paying dues, but D doesn’t need to brag about having been there and done that in this business. The only thing Count Bass D cares about is making good music, and it shows.

The album is by turns playful, insightful, humerous and raucous. An introductory skit called “Jussa Playa” laces D’s beat with a variety of samples from Richard Pyror to Bishop Magic Don Juan. A couple of short tracks follow, then D comes in on “Antemeridian” to proclaim, “The toughest musician in hip-hop history, has finally mastered, the art of the MPC.” Judging by the beat you’d have to agree, but without his smooth flowing rap it just wouldn’t get the dap:

“These drum machines is like Cliff Notes, cause I’m used to real notes
or ebonies and ivories to make melodies with
But these drum pads come in banks of sixteen
So I flip these with the music theory the God educates me with”

Count Bass D makes time for homies like Edan, who raps on and co-produces the short “How We Met,” but even with his scientific verse he still can’t outnumber the Count in rap or music skills. Just peep the vocals on “Sanctuary,” one of the few tracks D didn’t produce himself:

“A tax on my shoes costs more than your clothes
I’m lookin for beats, while y’all lookin for {hoes}
Am I opposed to that practice? Never, but I’m a Fender Rhodes Scholar
Studio musician, not a studio gangsta
I entice with mic and beat devices; while y’all {niggaz}
given clerks your beat list, drivin up the record prices
The main reason for your ‘Pre-Life Crisis’
is the fact it shine like first with the facts of who the nicest”

“Subwoofer (Dumile)” breaks it down more succinctly than any other track does previously on the CD. D encompasses his twin loves of producing and rapping into a single showcase over a hypnotically melodic groove while sounding properly boastful about his own formidable talents:

“Tap the MP with cushion that’s Snuggly
I’m tryin to make my mark, y’all drink bubbly
Your idol, the highest title, no one above me
You love me, I’m never stayin, Mike Dunleavy
[..] Pardon me, honor me, call him Lord
Beware of the noose I design out this mic cord
Behold the Man of Steel, not a cyborg
Step side to side like Bjorn Borg
Forty acres and a mule, give me my rhyme back land
Do more speedy Pinky’s than Pac-Man
You like the minerals and vitamins”

Throughout the album, short and sweet musical interludes keep things moving while not leaving you bored or missing out – in fact they’re just part of D’s design to showcase his talent; because it ain’t all just about rap. The middle of this album proves that, as you work you way through head-nodders like “Real Music vs. Bullshit” and “August 25, 2001.” Unfortunately the action bogs down on “Blackman Dreams”; a song that probably should have been inspiring and wasn’t, and “Reign or Shine” featuring the not-so-punnily named female MC Rayna Shine. Things take a turn for the better with the jazzy “Blues For Percy Carey,” which pays homage to locked down underground hip-hop sensation MF Grimm. The album then peaks again on “Seven Years” featuring the sublime vocals of Dionne Farris, and subterranean sound of “Ohio Playas” produced by J. Rawls. Perhaps feeling inspired by the beat, D’s flow seems both more esoteric and energetic on this track:

“I want a job to go to, not to be at
What’s good for the goose is good for the propaganda
Meander, through the hall
Neanderthals, LIKE THIS Y’ALL
They always tryin to ask me questions y’all
Count bigga nigga got more talent, only God can figure
Please don’t invite me to booth, my nigga Tigger
I ain’t Jigga, just a poor black nigga”

The album winds down at this point; first with the semi-autobiographical “Dwight Spitz” title track, then with the sung “No Time for Fakin’ (Part 2)” and after some guest MC’s he drops “Take Control” with vocalizations that are a dead ringer for Common Sense. “Coming Soon” features a bonus D beat/instrumental, so be sure to fast foward past several minutes of dead air instead of hitting stop thinking that the CD is over. In fact the only really bad thing about “Dwight Spitz” is that it seems to be over too soon; and though D is a formidable beat maestro a few more rap songs like his 12″ manifesto “Violatin'” would have been a nice touch. That’s the problem sometimes with coming in from the cold — even when it feels good you end up wishing it was just a little bit warmer. Given the mediocrity of much of today’s commercial AND indie rap though, you’ll be pleased if you bathe in the warm glow of Count Bass D.