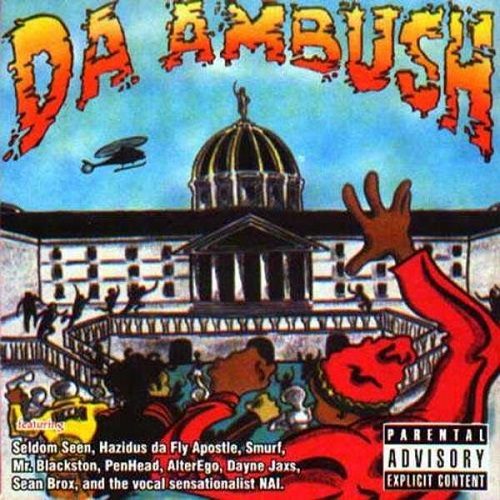 Everybody’s got their own vision of hip-hop. But when a bunch of people come together for an independent compilation, it’s the vision of hip-hop itself that is materializing before our very eyes. Rounding up local talent, Make It Happen Entertainment, operating out of Harrisburg, PA, released “Da Ambush” back in 2000. Being exclusively responsible for executive and musical production respectively, Jon Hart and Jay Allen made sure things didn’t fall apart like on so many other compilations. In fact, “Da Ambush” comes across amazingly consistent.

Impossible to hate or even just remain cool in the face of a quality offering like this. The rappers keep it strictly lyrical, making this compilation a throwback to the days when even gangstas were spitting hot rhymes. Case in point here: Sean Brox, whose “Modern Day Niggaz” lets us in on the secrets of taking your drug dealing to the next level, i.e. the next plane with some fine storytelling that’ll have you hold on to your seats, Ego and his “It’s On”, who starts things off with a classic “King of New York” sample, or Hazidus Da Fly Apostle, who schools young thugs on “Poverty’s Reality”.

But it’s where “Da Ambush” goes beyond thugging and drug smuggling that progress is made. On “Touch Me to Feel Me” Dayne Jaxs paints the picture of a society devastated by the drug business with a personal touch you are sure to feel. PenHead asks “Who Wants to Be a Terrorist”, providing the answer right away: “Nobody grows up wanting to be a terrorist.” I hope this still is true even where the assassins of 9/11 are being hailed as martyrs, but on a larger scale he’s certainly right about terrorism being the ultimate decision of a desperate man.

However, he would be well advised to listen to fellow contributor Smurf, who illustrates how dire the consequences of giving in to pressure can be. He follows a young couple’s night out, displaying a storytelling ability that’s nothing short of perfect. Just as the girl is about to tell her man that she’s pregnant, they are attacked by a gunman. A fight ensues, during which she gets shot, eventually staying alive but losing her baby. Of course the part about her being pregnant is hinted at, but not releaved until the surprise ending. After he wraps up the moral of the story in the chorus (“Under pressure how will you react, your hand’s on your gat / but can you find another way of handlin’ that?”), Smurf heads off to the second chapter which deals with peer pressure. He even goes as far as comparing these fatalities to suicide:

“Another son and brother no longer among the livin’ mass
The real problem’s there’s only a few of any who ask
Is it homicide of suicide that left his frame froze?
Was he murdered by that nigga or the path that he chose?
What degree of beef justifies blastin’ your foes?
Caskets are closed while the number of casualties gross
From my block to yours, a similar madness we know
The saga of another kid ends tragically so”

Seriously considering suicide on the other hand, is Mr. Blackston in “Final Exit”. With a gravely voice speaking over a simple track comprised of a flute floating over a well grounded beat, he’s taking a minute to pray before the second he dies:

“Askin’ God am I not forgiven for my crimes in a previous life
was I a sinner cursin God in a devious life?
Does Jesus Christ hold a grudge against me while others live the easiest life
with no struggles, no stress, no test
never knowin’ demons like loneliness, never depressed
never jobless, never on they hands and knees
Beggin’ “God please cure this poor man’s disease”
Was everything in church just religious fantasies
destroyed by science findin’ ancient man’s debris?
If you listenin’ God, speak to me and answer these
questions we been askin’ since we covered plants with leaves
Why do good people feel Satan’s wicked embrace?
Why are good people sick and displaced?
Why are good people forced to live a life that is empty and stressed
while the wicked seem happy and blessed?
Talk to me, the devil’s tryin’ to walk through me
Will you respond or will the coroner be forced to put the chalk to me?”

He puts extra emphasis on his plea in the chorus, where he raises his voice in anger, yelling: “Dear God, do you listen when I cuss you out? / don’t it provoke you to respond to what I’m fussin’ ’bout?!”

Maybe he should take some philosophical advice from Seldom Seen who, judging from “Make You Laugh Make You Cry”, has the patience needed to sustain life’s ups and downs. Seldom Seen’s also on the three remaining cuts. The title track starts things off with a couple of rounds of hard rhyming from some of the rappers who later will shine individually, while “True and Living Proof”, the other posse cut, finds Hazidus, Seldom Seen and Sean Brox uniting over a similarly styled orchestral track to expose those whose ‘mouths are bigger than their heart’.

Seldom Seen’s solo cut “Local Legend (Part 2)” finally speaks for all those hometown veterans that are condemned to only garner local praise just because they live in cities like Harrisburg, PA. To think that the only thing I knew about Harrisburg was that there was a malfunction at the nearby Three Mile Island nuclear power plant in ’79 which, although there (allegedly) was no hazard to the population’s health, reminded the world what dangers lie in nuclear power. Now I’m led to believe that the Three Mile Island incident has spawned a new generation of mutated supa emcees concentrating in Harrisburg, PA. That’s TV show material right there, but to be honest I’d much rather hear another compilation.