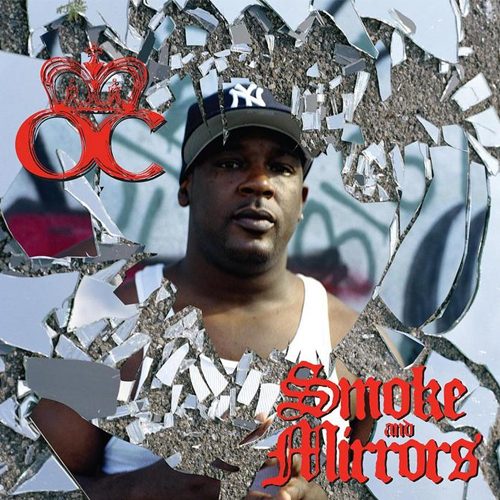 O.C. is one of those artists that everyone knows of, but the average fan couldn’t name more than a handful of his songs. Of course, there’s “Time’s Up,” which has become the absolute standard for venomous righteous emceeing. He’s got an arguably classic record under his belt and he is part of hip-hop’s original supergroup, Diggin’ In The Crates. Some might not realize, though, that he has been somewhat prolific of late, and “Smoke & Mirrors” is his fifth album. Despite his reputation, the only record that even sniffed his true potential was “Wordâ€¦Life,” his debut. The others were listenable, sure, but something was missing. Even when he did rock hard, his production was frustrating, and his killer instinct was frequently missing on his later material. Too many rappers have been burdened with unfair expectations based on their early work, however, so let us give the man a chance. After all, this record promises to be the first over which O.C. has exercised complete creative control, so if nothing else, “Smoke & Mirrors” may be the truest O.C. album yet.

Any casual acquaintance of O.C.’s music knows his steez well enough. Offering a blend of battling and introspection, he is best described as a prototypical emcee. He is somewhat subtle and nondescript at times, favoring expressing thoughts clearly in favor of pounding the listener with quotable punchlines. Very little of his material is instantly memorable because of this non-confrontational style. He has gotten a reputation as a grimy, weathered rapper, but he could sound just as comfortable over the most sultry R&B beat.

This record appears to be out to prove that he can rock the softer production, because Mike Lowe’s work on the boards is both formulaic and undefined. Coming full circle from “Wordâ€¦Life,” the drums are masked by elaborate and formless samples instead of carving out their own distinct noise. The record’s music is a mass of functional but mostly bland loops, empty and uninteresting. The production could be easily described as operatic and epic, but only in the most general way possible. Take the typically grand “Challenge Y’all,” for example. The music consists solely of a mishmash of horns, strings, and a faint hint of keyboards, all intended to sound as similar as possible. The result is that despite the variety thrown into the mix, there is absolutely nothing except this swirling mess, a drum beat, and O.C.’s vocals. Instead of sounding stripped-down, the track sounds like the worst opposite: a complicated production that is ultimately less interesting than its individual parts.

The album’s defining moment comes right in the middle with “The Good, The Bad, The Ugly.” What is initially a valiant attempt at an introspective concept song highlights the significant problems with the album. A faint hum is present on the beat as a respite from the usual amalgam of production clichÃ©s, which appear as well. Each of O.C.’s three verses provides a different side of his persona, a constant struggle that his fans are already aware of. The concept is executed well enough, but the song serves to remind the listener why O.C. has struggled through his last few albums. He runs the gamut here between his good side, his bad side, and his righteous side, which makes each side difficult to believe individually. The most reflective moments are the most poorly conceived, because he favors treading worn ground instead of actually explaining what is bothering him with details. The hook to “What I Need” states “it’s where I’m at in my life, who I be ain’t your concern, what I need ain’t your concern, I stand alone â€˜cause I’m a man.” After a hook like that, I need to be reminded why exactly I’m listening. The song is about what he needs, and he alludes to it in a vague way, but he is holding the listener at arm’s length.

“Smoke & Mirrors” is seventeen tracks long, and nearly every one is a full-length song. Musically, it is completely uniform in the sense that Mike Lowe has tried to hook up fifteen epic tracks, and none of them really work at all. “Martyr” is the grandest, an overblown explosion of trumpets which tries to coax a bravado performance out of O.C. As expected, this doesn’t work, because O.C.’s voice is not up to par with such a production, even if it had been crafted with more flair. He needs music that is simpler so that his voice can be allowed to the forefront. Let’s be serious here, no one is gonna buy an O.C. album for the beats. Those who are looking out for this are doing so only in the hope that he will return to form. “My Way” is notable because of the use of the same sample that M.O.P. had on “Welcome to Brownsville,” and is not as tightly conceived either. “Emotions” is the album’s best song, with a blissfully low-key beat and some true introspective musings from O.C. The edge he burst into the game with has faded long ago, and here he actually opens up to his audience, with heartfelt results. A couple of other tracks work moderately well, but the production is usually far too overblown to allow us to fully experience O.C.’s words. Even during the rare times when he is visibly angry, hinting at channeling the ferocity of his glorious past, the music overwhelms his emotive but subdued voice.

O.C. is a skeleton of what he once was, no one can deny that. As standard rap albums go, though, he is still an able lyricist. He breaks absolutely no ground in his rhyme structure, delivery, or content, but I can think of plenty of people I’d take him over regardless. There are essentially four prongs to his style: emotional, defensive and guarded, chest-pounding, and hard-headed purist. He moves through these alternately, and the combination of the four represents a complete but very typical emcee. “Time’s Up” is his legacy, but the themes he explores there have become as trite as the themes he was attacking. I have nothing against the song, it is one of my very favorites, but the fact is that O.C. has not changed all that much. His wrecking-ball mentality has been replaced, but he is still recognizable O.C.

I can’t say this is a disappointment. The potential for surprise was there, because of O.C.’s affiliations and his past track records, but this record is quite standard by most criteria, and the production doesn’t give O.C. a chance. The creative control he exerted over “Smoke & Mirrors” threatened the quality more than helping. In this case I wonder what might have happened if Hieroglyphics Imperium (yes, that Hiero) had guided him a bit more. Regardless, this is an unfortunate casualty of misguided ambition, and those in search of another era, whether past or future, will not find it here.