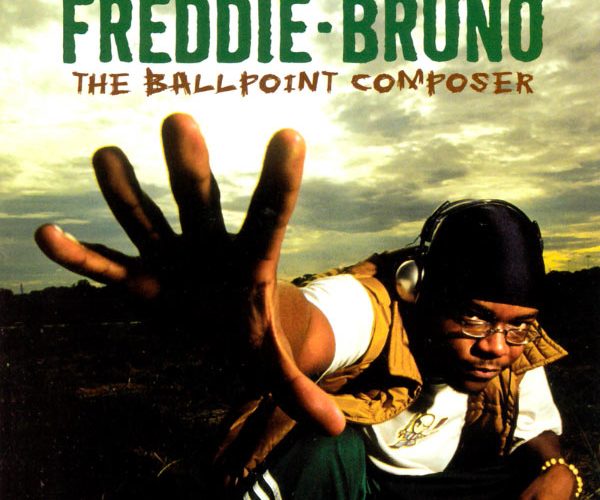 “I’m the Ballpoint Composer,” says new artist Freddie Bruno. “I’m a producer, an MC, and a break dancer (when I was twenty pounds lighter). “I keep it real, but I have fun.” He’s the lyrical lovechild produced by Gift of Gab and J-Live is who he is! Before he could get through his first 16 bars I had to do a double-take at the cd jewel. I just know I had the wrong disc playing. Freddie may be a new name to most, but his sound and content are current staples in many a cd changer.

When I liken his sound to Gift and J-Live I am giving my seal of approval to you the listener of the quality Freddie B is putting down. While this marks his first solo album, he is an eight year recording and performing vet, appearing on several compilation and collaboration albums with the likes of Deepspace 5, E-Roc, and Mars Ill. Underground acts, if you will, yet a major sound worthy of consumption. There seems to be a new prey on the market amongst MCs â€”internet Hip Hoppers. On Comp USA they get blasted for trying to jumpstart their careers via chat rooms and MP3 files:

“You gave up on the pen, now you handy with the cursor
MP3, an acronym for malpractice
Three times a lady
It’s shady like Kevin Gladys
Downloaded, manipulated and AcidPro
Swtich the tempo thinking that nobody would know
Don’t understand the definition of the word recoup
Making four track albums outta pause tape loop
You’ve unzipped with ya self now ya full of regret
Frequently on message boards stealing beats from the net”

“There’s a fine line between keeping it real and right
So you either walk the border or just stay outta sight
And that’s the way that I write never to take that path
Should I forsake my past? Did you erase my wrath?
Think not on the ink spot, bubble my nerves
and walk away a true artist from these internet nerds
Up on my MBox with they weak thoughts
Just ’cause they got a computer they think they Aesop Rock”

“This album is all about me growing as an artist,” Bruno explains. “I really stepped it up, got a little more intricate, a little more hype with it. One thing about me people notice is how I’m always trying to reach the next level.” If he can tell a cat his rap book looks like scribbles written with his left hand and that you couldn’t get protection even if your spiral carried AAA (American Auto Association), I think he’s dropping most cats off in the basement.

The bulk of the production is carried out by Harry Krum with assistance from Blake Knight. Interludes at the end of a few songs are produced by Freddie. Freddie does however get full production credit for The Monitor, where he writes and produces the music. There are a few guest vocal appearances that help in giving the album a full flavor and provide contrast for Freddie B’s style. Nothing is overdone within the fifty minutes Freddie calls upon your attention.

“This is my outlet to show the world I can hold it down on my own, The Ballpoint Composer.” The subject matter, delivery, and music are working very well for this debut album. While you won’t see or hear about him killing any cars (that’s right), working over some naÃ¯ve female or engulfing mass quantities of narcotics, The Ballpoint Composer does something to ya head. A disclaimer within the jewel states: This product may result in spontaneous head movement, resulting in neck injury. Please proceed with caution. I consider that moving to the next level (the brace fits pretty snug at first).