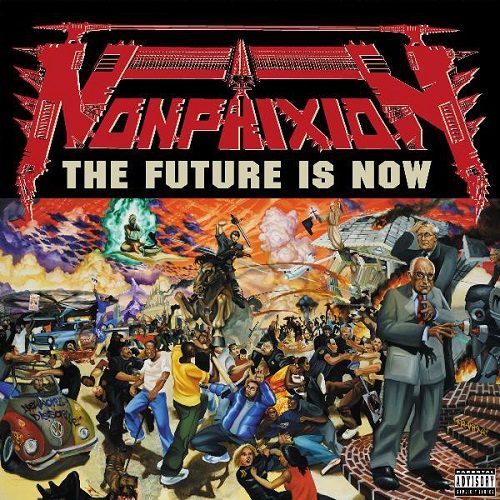 The Future is Now

Non Phixion :: The Future Is Now

Just to clear up one thing at the start, Non Phixion is about as close to the Beastie Boys as Eminem is to Vanilla Ice. Other than being white rap groups, that’s all they have in common – in terms of intent, style, and delivery they couldn’t POSSIBLY be further apart.

With that out of the way, their full-length debut CD “The Future Is Now” is possibly one of the most important indie rap releases of 2002. When their “I Shot Reagan” twelve inch debuted back in 1998, this crew seemed destined to be the next big thing in the hip-hop underground. The single had all of the elements for rap stardom: controversial lyrics, polished deliveries, and a beat so infectious your body involuntarily started to jam in response. Unfortunately since then the group has been bounced in and out of several record deals, each time delaying the inevitable release of this debut.

Not taking any chances now that they’ve finally got a label willing to print and distribute their shit, Non Phixion brought in some hip-hop heavyweights to provide buttery beats. Large Professor produces a Mobb Deep like track for “Drug Music,” and not surprisingly DJ Eclipse cuts a line from the Queensbridge dunns to make it complete. Pete Rock proves just how far he’s come from his “trademark horn stab” days with the ill backdrop of “If You Got Love.” As if this wasn’t enough, DJ Premier laces them with the kind of sonic wizardry he normally reserves for Guru on GangStarr records with the song “Rock Star.” Even when you put these and the other guest beat maestros aside, Psycho-Logical-Records star Necro handles lead production duties so well that the quality level never slips below “excellent.” He provides symphonic madness for “Futurama,” stripped down pianos and drums for “The C.I.A. is Trying to Kill Me” and even has a surprisingly touching melody for “Say Goodbye to Yesterday.” Musically alone this album is a smorgasboard of rap delights which will have you coming back for plate after plate until you’re stuffed to the gills.

Lyrically, Non Phixion is as underground as they come. Necro’s brother Ill Bill often plays the starring role, but partners-in-rhyme Goretex Medinah and Sabac Red don’t slack off on their rhymes. The only stinging criticism one can offer about their writtens is that sometimes the song titles and lyrics don’t seem to match other than the chorus. When you hear dope songs like “Black Helicopters” though it hardly seems to matter, as Ill Bill proves with his opening verse:

“Had the time of his life; a capitalist with a communist wife
Started to fight and did to cats what God did to Christ
Hardly the type to give garbage advice; he was larger than life
He’d penetrate the roof of your car with a spike
Trained by insane ex-marines
CIA trained a renegade assassin androids
Passport pilot to black helicopter choppers over Bosnia
Sniffin so much coke, nose is fucked up and bled a lot
For all y’all bystanders baggy ass jeans to hide ya banga wranglers
Thugged the fuck out, hang with bash-in-ya-face gat gangsters
The government’s, these other kids, it’s like the drunken bitch
that sucked a hundred dicks at your party then cried rape”

Each rapper in Non Phixion has a distinctive voice in the group that could be presented well as a soloist but together forms a dope trio. Goretex has a dusty voice somewhat reminiscent of Proof from D-12, Sabac may remind some of El-P with his dense verbiage and fast spitting rap ability, and Ill Bill’s just on his own ish but could best be compared to his bro Necro if anybody. They use these vocals to create both bizarre epics like “Strange Universe” featuring MF Doom and sublime songs like the Dave One produced “Cult Leader” which flips Public Enemy’s “By the Time I Got to Arizona” into a new dimension where Goretex calls himself “the combination of God and Satan” and takes braggadocio to a Bin Laden level:

“I turn knees to noodles; I make my female followers
want me until they pussy’s drippin like fruit juice
The pervert, the pathological, the prophet
I’m the second coming, the Anti-Christ, the final conflict
Who got nuclear weapons and a suicidal doctrine?
The cult leader, and I’ll never stop until I got you locked in”

It would be easy to define this album with cliched phrases like “quintessential backpacker hip-hop” but the sad truth is that albums this unique and interesting to listen to have no place on radio shows other than those Bobbito the Barber hosts. As dope as songs like The Beatnuts produced “Suicide Bomb” and Large Professor’s ominous “We Are the Future” are, there’s just no chance for songs that challenge both your cerebral coretex and your head-nod factor at the same time in a world dominated by the latest hits from Ja Rule and Eminem. Still, if you’re brave enough to take an enjoyable trip through something out of the ordinary that may even at times be hard to follow, Non Phixion’s “The Future Is Now” fits that description to a tee.