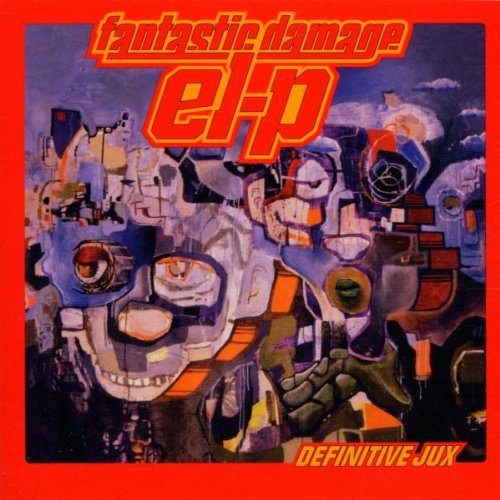 Backpackers everywhere rejoice, El-P has blessed y’all with another steaming plate of the next shit. It’s a shame that many judgments on this album were made before it was heard, or really even dropped. Since his days as the frontman for Company Flow, El-P has always represented what so many people hate about underground hip-hop – the quintessential white kid dropping off-beat science over noise – and many hate based on this knowledge alone.

For the most part, “Fantastic Damage” is still clunky, lo-fi and scientific. “Lazerface,” “Dr. Hell No Vs The Praying Mantis,” “Truancy” and others are dissonant, sometimes bordering on hardcore techno. However, El-P has the good sense to lace his more cacophonic beats with more conventional lyrics. The boring “Dr. Hell No” thunks along, but does so under a crazy narrative of a sexual encounter while on mushrooms (and probably a few other things) and a couple simple verses from Vast Aire. “Lazerface” sounds like a factory, but El-P drops reflections on his place in the music world and compensates for the dissonance. Alongside the harsher tracks, some of “Fantastic Damage” borders on downright beauty, such as the faint orchestral sample on “T.OJ.” The best comes when the less scientific lyrics meet up with the doper beats, like on “Stepfather Factory.” Far beyond a mere concept jam, El-P projects his anger about his abusive drunken stepfather as a world in which “robotic relatives” are sold to complete families basically for the sake of completing them.

“So you purchased a paternal unit, class A type 1
A new addition to your living room space, watch it go
Have your warranty for at least 90 days, so have fun
If in that time frame there’s a problem, please let us know
Before you start there’s a few details that you must learn
Technical specs about your unit to make things run smooth
In an effort to find an energy source our company’s learned
The cheapest way to keep his battery running is with booze
Plug it in, give it a name, man of the house, help sustain
Wear the pants, you can relax, water the pad, nucular fam…”

Aside from noise and beauty, there’s plenty of good ol’ boom-bap. “Tuned Mass Damper” and “Squeegee Man Shooting” both slam and would fit well into any mix. Even when the beats are more normal, El-P still spits on unconventional subject matter, if there is subject matter at all. While “Squeegee” dips in and out of recalling his youth, “Tuned Mass Damper” is vague at best about whatever he’s talking about. But “Fantastic Damage” works worse on the level of what is constant and better in what stands out. Both these tracks stand out, for example, because they sound, more or less, like normal hip-hop bangers. The lyrics work the same way. When “Tuned” has the listener scratching their head, the lyrics switch and El-P earnestly says “I dedicate this to Matt Doo (thank you)/my name is El-P, I produce and I rap too.” There is a similar effect on “T.O.J.” where the emcee confesses “I’ve never really loved anything/I grew up thinking I was crazy…”

In the end, it’s the contrast effect that saves “Fantastic Damage.” When the beats are too noisy, the melodic tracks come through and balance out the noise. When the raps are too complex or robotic, El-P shows his versatility with a concept jam or at least a straight-forward line. When there’s too much El-P to handle, one of many guests shows up. Camu Tao and Cage show up to rep the Weathermen on the extremely paranoid “Accidents Don’t Happen,” one of the standout cuts here. Mr. Lif’s rhymes on “Blood” are extremely ill. While Aesop Rock tries too hard on “Delorean,” Ill Bill’s cameo on the same track is sick, even while being completely pointless. Best of all, DJ Abilities (of Rhymesayers Entertainment) handles all the cuts on the album, and does so with expertise. “Fantastic Damage” is not for every rap fan. But, for an artist with the capability to be almost unlistenable and equally dope, El-P does a decent job balancing the two extremes.