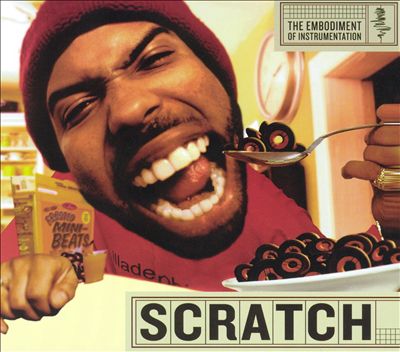 The Embodiment of Instrumentation

Scratch :: The Embodiment of Instrumentation

Every now and then someone wants to bring up the idea of adding BeatBoxing as the fifth element of hip-hop. There are pros, cons, traditionalist, radicals and everything in between. Adding more of an argument to the subject enters Scratch, the human turntablist, of the legendary Roots crew.

For those that aren’t aware of who Scratch is, he is the BeatBoxing element you hear on various Roots LPs’ – notably on songs like “? Vs. Scratch.” More than likely, you’ve heard Scratch do his thing, but you were so into the sound that you swear that DJ is nice with his. Wrong you are, brotha man – what you heard was some serious vocal dexterity being brought to you compliments of Kyle Jones, a.k.a. Scratch.

From rugged drum beats, to some jazzy joints, on over to an annoying clock radio alarm sound, the vibe of this album is out there as well as in ya face. Starting off the set is a freestyle mÃªlÃ©e featuring Black Thought, M.A.R.S., Malik B and Co-Op in “U Know the Rulez.” Following the same “give it to you raw” feel that makes for good MC/BeatBoxing combinations is “That’s What We Talkin’ About.” Out of nowhere comes E.S.T.! Yeah, The Acknickulous One dropped in for a few bars (way to rep the Philly hip-hop history). Rockin’ the horns and rapid fire spiting technique, Scratch brings the ruckus. Scratch uses some nice sounds to accompany each MC, but more impressive is the way the beatboxing is accentuated with the various verse patterns. This technique comes front and center with “Sumthin’ That U Missin’.” Using tweaked out sound effects, vocal scratching, and a sweet little mandolin playing a tune off into its own thing, this might be the signature piece of the entire album (or at least a perfect showcase of what Scratch can do with hungry MC’s).

The sounds used after this part of “The Embodiment are exceptional. You’re torn between listening to the MC and/or listening to Scratch. There is good balance with every song. Not only do you get sharp delivery in the form of lyrics, but also in the non-stop beatboxing from Scratch. And I do mean non-stop. Each beat is done from start to finish, no sampling for ease of production! There are some straight MPC type sounds being belted out for MCs to flow over. When Malik B drops in on “Exhibit One” you are about ready to question the legitimacy of this whole joint; telling yourself, “There is no way a cat is dropping sounds like this out his mouth. What was that? The Funky Worm? All hell nawl!” Fresh from the Funkadelic archives, they don’t even end this piece like it’s actually over, it just fades out like you ain’t even dope enough to catch where they going with they shit.

And where are they going? Leading you to the heavy head nodder “Peoples Getting Rich” featuring Stamma a.k.a. Steve Sterling and the smooth speak easy of “3 Barstoolz Away” featuring Rich Medina and Yameen All World. Right about now you realize you have been through a wide range of Scratch’s repertoire. He is the glue that makes all of the rapping, poetry and traditional instruments stick together.

The album ends with some smooth Nu Soul (yeah, that commercial is comes to mind) sounds. Bilal throws out a Hittsville demo-type jam with “Square One,” while Jill Scott displays her vocal abilities with “The Morning After.” There are a lot of good things taking place within Scratch’s solo debut. He shows that if you can imagine it, it can be manifested just as you envisioned it to be. Whether you are looking for a hard hitting cipher sound or a laid back jazzy tune, Scratch gives it to you to the fullest. Remember, this is Scratch’s album. Not Malik B’s, not Schoolz of Thought’s, or another Roots album. Scratch is the musical side of this release. How does he fair out? Peep “U Thought Wrong” and you’ll find out.