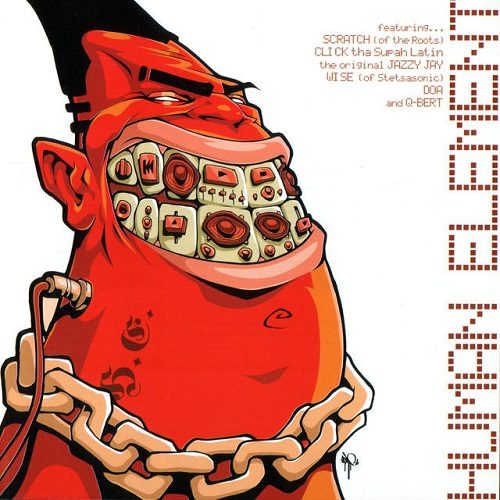 Leave it to High Times Records to spawn something as creative as “Human Element.” Through 108 Records, they are distributing a beatbox compilation, billed as the first one of its kind. Whether good or bad, before listening you can tell it will be interesting. The art of beatboxing has not been fully explored on wax, with a few exceptions, and this compilation is one of its brightest moments.

A little bit of everything can be found on this disc. The first song you’ll hear is a collaboration between the Original Jazzy Jay, Bambataa’s DJ, and Stetsasonic’s Wise. Besides being a nice intro, the personnel involved make it a perfect starter. The Roots’ Scratch hooks up the next song, and in terms of quality and skill, the “Scratch Intro” is the best thing on the album. Scratch demonstrates why he is at the top of the class in what he does.

Kmillion displays skill on the next offering, “Heat Rocks,” but despite being a polished beatboxer, the material he presents becomes irritating. The weird sound effects are frustrating, and his imitations of beats like “Grindin'” are somewhat disappointing. This is the main problem with the compilation. Artists with loads of talent are all over this release, but some of the tracks sink into a monotonous pattern without any remarkable beatboxing innovation.

Only a few tracks actually feature rapping, the best of which is “Contact.” Click Tha Supah Latin hooks up a nice beat, and the addition of kid’s voices in the background give it just the right amount of playful funkiness. On “Elevation,” there is a beautiful vocal interpretation of a horn section. This added piece gives the beat more substance, and D.R.E.S. Tha Beatnik kicks a couple of nice verses. The other standouts are ones that innovate. Chile Diaz’ “Peruddha” has him making noise through what sounds like a bottle top, and the result is intriguing because of how fresh it sounds.

The scope of the music presented in “Human Element” is excellent. There are hip-hop legends, big names, and underground artists. In addition, there are people representing every corner of the map, from Seattle to NYC to Canada. This allows for many different styles of beatboxing that spice the mix up nicely. There really is some inventive stuff here, which is needed since most of the artists appearing lack the jaw-dropping skill of someone like Scratch. What really boosts the replay value is that several songs employ outside music and effects to flesh out the various vocal stylings. The most notable example of this is “Liquid Butterfly” by Kris Jung, which features a heavy guitar riff. The end result is that the Jung’s mouthed beat sounds like the backing drums instead of being the centerpiece of the song. This is the best song on the album because of its musical depth. While others show off their talent through standard displays, “Liquid Butterfly” provides the best and most original composition on the album.

Though there are several jaw-dropping moments, at times the material wears thin. The producers of “Human Element” do an admirable job of bringing a variety of sounds together, but I imagine that listening to nearly any beatboxing compilation would become tiresome. Something about hearing mostly human voices is strenuous on the ears. The shortage of actual music on most of the tracks gets old, and by the sixth or seventh vocally dominated song, you will find yourself leaning towards the skip button. The only way to get around this on such an album would be to feature Rahzel-esque talent from top to bottom. All of the artists are talented, but your patience will be tried towards the end.

Despite its deficiencies, “Human Element” is a very courageous collection. Any compilation with such a narrow vision is downright daring. To their credit, there are several incredible selections in between the more standard fare. “Liquid Butterfly” and “Scratch Intro,” especially, are definitely worth checking out. If beatboxing is your thing, or you just want to hear some gifted individuals make music without instruments, this is for you.