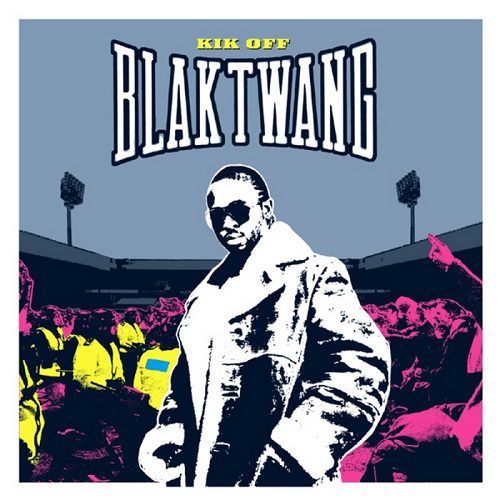 So, who is Blak Twang? He’s also known as Taipanic and Tony Rotton and is, according to UK magazine Hip Hop Connection, “the best rapper in England – and by a LONG way.” He can introduce himself best though:

“Had a few singles, one LP on the streets,
one classic unreleased;
I ain’t done too bad
[…]
First UK hip hop act to pick up a Mobo
First to release tracks back to back with video
First to distress radio and go inner-city gold”

Blak Twang starts his album proper with the title track that begins with a whistle and a football theme. It’s a cool start, loud and brash and, when the lyrics are considered, very British. It’s a statement-of-intent for Taipanic. He shouts: “Get ready for Kik Off,” and this could be taken to mean many things; his album, the UK scene, the World Cup even:

“International jujitsu with my Brit crew
Anarchy in the UK; Rotten like Sex Pistols
Blowing whistles on dodgy officials
bring your Big Issue, get gunned like Phil Mitchell”

Taipanic shows himself off as a London bad boy. Whilst the references to British culture (The Big Issue is a magazine sold by the homeless and Phil Mitchell a soap character) are amusing, endearing even, to me, they may be annoying and/or totally meaningless to American listeners. In terms of music the beats are bouncy and loud but very much secondary to the rhyming which is good. I like Twang as a lyricist and writer but his flow suffers a little on this album as being a bit too similar. It always seems loud and lacks subtly; whilst this is fine for a few tracks, and can make a brilliant single, it doesn’t really come off across a whole album. A fantastic track is “So Rotton” featuring reggae artist Jahmali whose sung chorus is as catchy as a whale-size fish hook. Over a “Cold as Ice” style booming bass Jahmali croons “Why is it so rotton? My people have you forgotten?” Twang then brings the ruckus with the verses and the brash style discussed earlier sounds great in contrast to Jahmali. The beats are similar to before; snapping drums and an upbeat, if plain, sound.

Twang produces all the album himself, bar two tracks (Harry Love laces “On Line” and DJ Dynamite on the bizarrely titled “Dirty Stop Out Uncovered”). This is a mixed blessing; none of the beats are out-and-out wack, but none are really attention grabbing efforts either. They are workmanlike, which is good and bad; it stops the album from falling on it’s face but also from being a real new classic. I don’t want to sound too harsh; they are good beats, and Twang has done pretty well to make decent beats to rhyme over. After all, there aren’t that many MCs around who can make really high-class beats to rap over; Taipanic isn’t one of these, but perhaps he is approaching this status. On “Ain’t Done 2 Bad” Twang gives us his thoughts on his past and his accomplishments. It’s nice to find this more introspective track amongst the others.

“When I turned seventeen I moved out; thought I was the boom
the golden child, shining silver star, sun and moon
I soon got brought back down to earth; some fool called me a coon
making monkey noises, imitating baboons
I had to defend it; man got brushed like a broom;
put some lumps on his face like cheap, imitation perfume
[…] The managers were always white, customers always right
and employees always fight”

The story telling on this track is pretty good and the beats all serve their purpose. On “Trixstar” (the second single after the title track) Twang again has some success when his voice is contrasted with another; this time the female flows of Est’elle. The beats are built on a relaxing, melodic sample and funky, scratchy drums. Both MC’s do pretty good jobs of rhyming about the subject of the song; a “Trixstar temptress, poison ivy, deadly as semtex… high maintenance with tastes very expensive.” After a verse each the two vocalists change into a call-and-response type style that sounds pretty good. This track is about fun and I can see it being popular with non hip-hop heads.

Towards the end of the record one or two tracks are a bit boring. Most, however, are pleasantly individual and engaging. The four tracks discussed so far are probably the best, but I’ll finish with another track in an attempt to provide as full a picture as possible of “Kik Off.” “Half ‘n’ Half” is a raw track, full of straight up battle rhymes. It is graced by Mystro and, once again, with another rapper at his side Blak Twang shines. The beat is fast and harsh; the mood is one up urgent confrontation:

“You can’t test, and that’s why I’m not stressed;
Me and Blak Twang get more attention than stripper’s that’s half dressed
[…]
You ain’t heard the half of it son
I’m the man who can spit a whole verse
with half of a tongue and half of a lung”

Mystro spits some fine rhymes on this track and, having heard him freestyle (unfortunately only on record) I won’t contest his claims. Twang matches him line for line with the freshest and loudest rhymes on the album. Imagine this tongue twister from Twang spat over a skanking beat: “Half of these rappers are half gimmicks, with half of their halfhearted hearts half in it.”

This (and “Kik Off”) are tracks that Taipanic does excellently. When he turns his hand to something quieter and more personal (“Ain’t Done 2 Bad”) this is also a great success. So what do I think the album lacks? It’s a good question. Firstly I think the style of beats are a little limited and too sparse for a whole album. Props to Twang for producing himself, but to get a few more guest producers might have been a wise choice. Secondly, his flow seems a bit too similar throughout. Of the five tracks I discussed individually and praised, three had other vocalists on them and benefited from this. Thirdly, maybe I just don’t like him as much as the next man. Having said all this, and made all these small and precise appraisals, the fact remains that I do think this is a good record and can see how others might like it considerably more than I do. His pride in “not having done too bad” is well deserved; Twang does have a good reputation in Britain. He certainly has the power to be the best, but the subtlety and finesse? I don’t thinks so; he’ll probably be in most UK connoisseurs’ top ten but he’s unlikely to be at the top of the list. I still think this is a fairly good, solid album. It’s good but in the end it could have been even better; but still a worthy effort from Blak Twang.