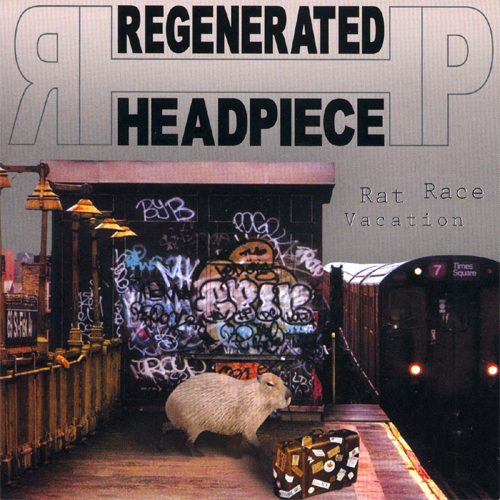 “Rat Race Vacation” is not your average rap CD; their label pushes them as having “next-level futuristic musical tactics,” which describes them very well. This isn’t said that in the sense that labels use to push mediocre albums (“yo, this be on some next shit!”), nor is it said implying it is going to change the face of rap as we know it. The Regenerated Headpiece crew just bring a style of lyrics and beats that doesn’t sound a whole lot like anything else.

Mostly “Rat Race Vacation” succeeds on the musical tip. RHP emcee Phon-X laces most of the tracks, with help from some cats named Sty and Don Q, and his style falls somewhere in the void between club-worthy and underground. Few producers succeed at this as well as Phon-X does; most that do fall too far on one side or the other. But the beats here don’t; the airy keyboard chords that slide under every song here provide a chill backdrop for the weird-ass lyrics, but still work with the bouncy, syncopated drum tracks. Scattered live basslines and guitar add an original touch to the whole mix. The result sounds something like the bastard child of Puffy and DJ Spinna, and it sounds dope. With skilled cuts provided by DJ Exfyle, the tracks on “Rat Race Vacation” are different, but tight.

The “next-level futuristic” lyrics that Phon-X and Shred Lexicon bring to the table don’t impress as much. Lines in passing like “astronauts playing connect the dots” are sometimes impressive; these cats definately drop science with punctuated flows and “set precedents with radioactive urine specimens.” Both emcees flow harshly though, and lots of words per line and sound almost strained. Combined with the bouncy beats, “Rat Race Vaction” comes off treble heavy and sometimes painful. Plus it’s rough saying too much good shit about any group with a track called “Talkin About Stuff.” For beginners though, Regenerated Headpiece show a lot of potential to reach the next level.