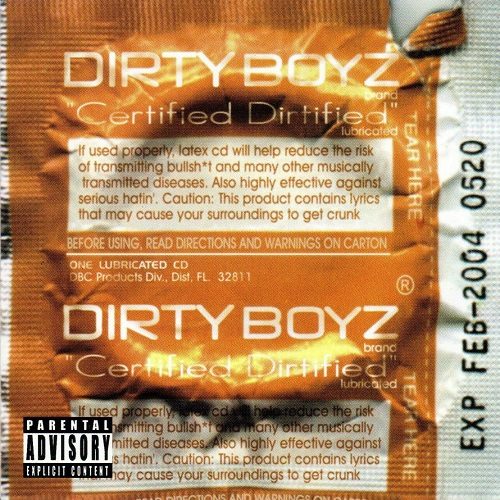 Have you ever wondered what would happen if you took Trick Daddy, Big Tymers, Juvenile, and the entire No Limit roster, threw them all in a blender, and hit purÃ©e? Well I’ll tell you what would happen: you would end up with the Dirty Boyz. This Florida trio will remind you of all the ingredients listed above, but as purÃ©ed items are prone to do, they’ll seem a little watered down in comparison.

What you’ve got here on “Certified Dirtified” is grimy, ghetto, thug-rap, Orlando style. If you’re familiar with Trick Daddy or any of the Slip-n-Slide crew (coincidentally also from Florida), then you’ll know what to expect here, both in terms of sound and subject matter. This is the type of shit that the word crunk is supposed to be used for. Big, hard, banging club anthems with southern-fried synth beats and loud, bold rappers spitting shit STRICTLY for the sake of rhyming. There’s no underlying message that you’re supposed to walk away with from the Dirty Boyz, other than the fact that “U Don’t Wannaâ€¦” fuck wit dem, ya heard? Now, this type of thing can be used to some artists’ advantage, allowing the listener to look past the COMPLETE lack of lyrical content and simplistic rhyme schemes. But those select few artists who can hold that listener’s attention always have some sort of gimmick. Trick Daddy, for example, uses humor to get in your head. Other MCs who lack lyrically usually have some sort of charm to them, or a unique voice or flow to hook your ears. Cash Money and No Limit artists use stellar production to bang out hits (some of the time). But while all of these approaches are tried and true (and more than welcome in most cases), Mike-Mike, Ra Ra, and J-Gutta (AKA Dirty Boyz) fail to take any of these approaches, and instead stick to boring, repetitive, simple raps and lukewarm beats.

The only time the Boyz ever really get creative is in the packaging for the album, and never on the actual audio side of things. The entire packaging is one of the most unique ideas I’ve seen: the cover resembles a condom package while the disc inside looks like the condom itself. The text on the front is more entertaining than anything to be found within, so I’ll share it with you: “If used properly, latex CD will help reduce the risk of transmitting bullshit and many other musically transmitted diseases. Also highly effective against serious hatin’. Caution: this product contains lyrics that may cause surroundings to get crunk.” Sadly, this all leaves me with unfulfilled high hopes as the disc plays out. Just looking at the track titles almost makes me sigh: “Whatchuknowboutdat,” “Whatcha Want?,” “Y’all Don’t Like Dat,” “Don’t Hate Me,” Now Ya Know.” Kinda spells things out for ya, don’t it?

So what’s the first thing you hear when you press play on “Certified Dirtified”? A nice juicy dicksuck. Ain’t that fresh? I know that’s what I love to hear, personally. No. No one wants to hear that at all. Fuck… So after about a minute of that and one Dirty Boy hollerin at another one over the phone, we’re dropped straight into “Whatchuknowboutdat?” (which is clever, because it’s all one word, see), the first proper track. (Someone remind me, please: why do we need intros on every single rap album released, again?)

Trying to describe “Whatchuknowboutdat” is like trying to describe every other track on the album. Basically, if you’re not in a club, or at least at a party when it’s playing, you’re likely to hit the skip button after the first minute-thirty seconds. But more specifically, you’re treated to beats that are, admittedly, sort of decent, but nothing spectacular, and raps that are full of thugs trying to convince you just how fuckin thugged-out they can be! Unless I’m mistaken, every single line spoken on this album has something to do with either guns, hoes, drugs, empty-sounding threats and/or braggadocio. But like Steve “Flash” said some time ago, you don’t listen to this music to hear brilliant wordplay. True. But while I agree with that, I counter it as well by saying that it can indeed be done. It can be, just not here.

And so it goes for an astounding 21 tracks â€“ but at around track 5, “Countryboy Clownin’,” everything starts to sound the same. I can let that slide, because although the record can be boring as hell, the odd track did have my head bobbing, namely “So Sidity” and “Now Ya Know.” But I have to take issue with “Smack Dat Bitch Up” (featuring Str8-Riot & Koffee Jones). This is a track that actually promotes beating women up. It doesn’t just subtly imply it, or mention it in one or two lines, it is all about that. How can anyone listen to that without feeling slightly like an asshole? It’s beyond me.

Looking past the flaws though (no matter how many there may be), I can see some validity in “Certified Dirtified.” It might be nice to throw on for a couple tracks at a party if that’s the type of shit your guests wanna hear. But the only way I could see someone sitting through the entire album is if either they were dared to, or if they couldn’t reach the eject button on their stereo. I listened from start to finish, and you know what I was rewarded with? Another dicksuck as the album closer. I guess good things don’t always come to those who wait.