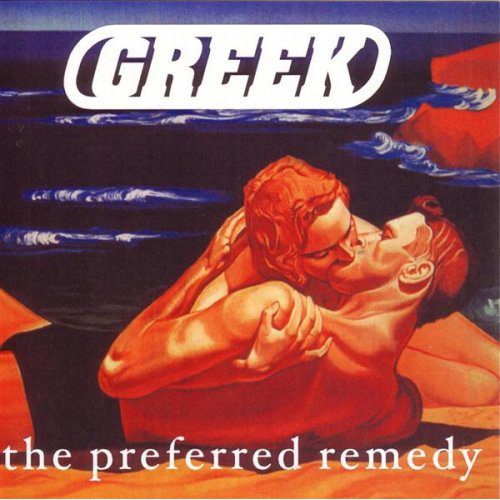 From the outskirts of this rap universe comes Jimmy Greek, “the summer school teacher for your all-year ignorance.” He may be “a cliffhanger with a sweet tooth for cynicism” now, but “the sweetest thing” he’s “ever known is Heather Chapman’s 8th grade love letter sealed with a kiss.” But as his school daze went by, he became, he says, “exactly what I aspire to be,” and nowadays you can look him up in “the Yellow Pages under ‘Verbalist’,” as his “expertism is lyricism, that’s why throughout anybody’s prism” he’s “a certified expert.” At least that’s his high opinion of himself. Hey, his “attitude is borderline rude, but so is every other genius,” right? Does Greek “lack words? Never,” this guy’s a hip-hop hunk for sure, “a clever man’s all-night wet dream.”

It’s too easy to use Greek’s own words against him, because “The Preferred Remedy” is a patchwork of hundreds of lines like these that often would need a guiding hand to shape them into some kind of meaningful structure. There is one topic however that brings out the best in him: women. “Bitter” examines what it feels like getting cheated on with exact observations like “your kiss gets shorter and isn’t that sincere,” “forgave you cause they say love is blind” or “with me you were crystal-clean, now you reek of another man’s cheap cologne.” Pouring out his soul in a hysteric delivery, Greek is definitely not afraid to let everyone know how bitter he is. It musta felt good, because he’s doing it once again, this time as the “Bitter Turned Escort”. Apparently, bitterness is the outcome of any of his relationships (even if his boss promises “your feelings aren’t part of the job”), but before this escort turns bitter, he gets to do some freaky things. If the price is right, that is: “Show me the money and I’ll show you what your marriage is missing / let him take that business trip, I’ll fulfill your needs / don’t worry, Mrs. Senator’s Wife, I’ll fuck you good like your husband’s fuckin’ taxpayers out of their hard-earned money.” Switching roles to the “Demented Nerd”, Greek – still bitter – plays the loud-mouthed loser to perfection:

“Masculine” finally makes mockery of the macho attitude, leaving it up to the distressed wife to put an end to her husband’s sick rants with a few bullets. These songs are all well written, make sense AND are funny.

Elsewhere, the listener risks getting lost in a labyrinth of lyrics. Quite a few lines are self-explanatory, like “I couldn’t get a deal even if my father had a label” or “if you’re lookin’ for a pretty hook, I left home without it.” But on a whole, freeform lyricism rules on this release. Taking into acount his overexcited voice that often seems on the brink of cracking up, his unwavering stamina and a slightly sarcastic undertone, Greek is the kind of rapper that will have you continuously wondering if he’s serious or not.

I guess we’ll just have to accept that Greek is ‘different’, as defined by El-P, who in “Different” is quoted as saying: “I don’t try to be different, I am.” But when Greek follows up this very quote with a line like “my best friend is a dictionary,” you’re left wondering if despite claiming otherwise, he actually STILL tries to be different, in case said dictionary should serve him to search for words that other rappers don’t use. That should give you an idea of this rapper’s and his album’s ambiguity. Greek himself seems the first to acknowledge the baffling nature of his writing: “Catchin’ these quotes without blinkin’ is a record even Guiness can’t categorize.”

We will always feel at home when battle rhymes are in effect, and Greek’s got ’em. The highlight has got to be “Mealticket” with its bullying track and Greek eating competition up, inspired by the Bigg Jus quote “where you can get the beef broccoli with extra duck sauce.” Despite quoting both former Company Flow members on his album, Greek’s rhymes as well as his beats are more traditional. Beatwise, “The Preferred Remedy” offers quality material. The production is colorful, varied, emitting strong vibes. The two best tracks are probably placed upfront, “The Perfect Storm” and “Starstruck”, who both are steeped knee-deep in dirty funk. Later, the beats get a little more obscure and experimental, but compliment Greek’s excursions quite well. While Greek may be straight from the fraternity of non-regular rhymers, he’s not weirding the listener out too much.