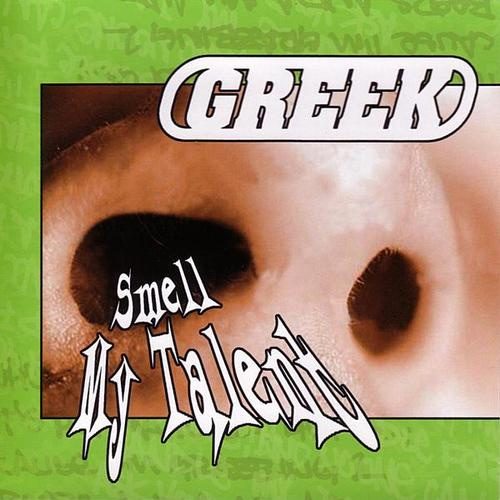 What’s the worst album cover you’ve ever seen? Whatever it is, the nastiest, dullest, or stupidest cover art you can think of, can never top Greek’s new album, “Smell My Talent.” For starters, the trim color selected for the edges is best described as booger green. This won’t catch your eye first, though. The giant, foul closeup of two nostrils, taking up three fourths of the cover, is the real attention grabber. The cover designer must have been proud of the pairing of booger green with the underside of a nose, which matches with the album title, a clever twist that some might not catch. But good God, what were they thinking? The cover is absolutely hideous, and not in an intriguing way, like the Geto Boys’ “We Can’t Be Stopped.” Just downright ugly.

At least things can’t get worse from there. Forget even glancing at the cover, just pop the CD in. That’s what really matters anyway.

The stuff that I’m here for, the music, isn’t half bad. Greek, part of the five man crew Jam Faction, is on some serious free-form rhyming. He’s got a subtle, twisted sense of humor that shines through after many listens. He doesn’t rap in a traditional manner, demonstrating an anti-rhythmic flow that sounds like a constant stream of consciousness. As with most other rappers, he’s got a bone to pick, but his frustrations are delivered in a unique manner. Check some bars from “Abyss”:

“Hide all of the women and children, leave the place bloody
Turn a meat locker into something muggy without practice
Verbal backflip
Somebody tell T La Rock ‘don’t worry,’ I got this
Shoot the gift like ‘B’ movie flicks without any tricks
Give you the fattest battle lyrics and stories that are sick
You ain’t ready for me
Apparently, I can tell by their record sales
And most are too frail to step out of that line
So when you rhyme
I can tell what’s gonna be your next line
And it’s a shame”

His rhyme patterns are staggered and disjointed. It’s hard to dislike someone who sees through the bullshit, though. Someone who instead of saying “I make it hot,” says “turn a meat locker into something muggy.” Greek is clearly one of a kind, a more grounded, traditional emcee version of Sole. I get the feeling he wouldn’t be happy about that comparison, however, because he seems completely content to be in his own category.

The magnificent opener “Sinkhole” is the best vehicle for Greek’s talents. Carl Kavorkian’s plodding, methodic beat is a perfect complement to his style. Here, he drops the whole rhyming concept altogether, instead focusing on sort of a rhythmic spoken word style. Greek’s vocals match perfectly with Kavorkian’s epic strings. All of the best songs on “Smell My Talent” feature similar production, as Kavorkian appears to have mastered this sound. “Break You,” for example, has plodding horns that allow Greek to slow his vocals down again for emphasis. “Watch Out He Spits,” with production from Jack Horner, is a haunting example of vocal samples used in a unique way. All of the best songs on this record start with the same formula, because both of the album’s producers are experts at crafting slow, laborious productions. The same can be said for Greek’s talent for riding these productions as well.

Greek’s unorthodox mindset is best seen on joints like “Mark Wahlberg’s Chest.” Clearly, anyone who is willing to name his song like that is on some other shit. The interesting thing about him is that without listening carefully, one would not be able to discern Greek from the sea of other rappers out there. His cadence is not particularly unique, just above average. His rhyme structure and content is where he is distinguished from most. This is occasionally bad, as his infrequent ventures into more depraved subjects are surprising and ultimately sick. “Pigs,” a foul ode to females, is the worst example of this. For the most part, though, his free-form style and sly sense of humor prevail.

Kavorkian and Horner’s production is mostly consistent but occasionally spotty. There are several clunky beats that clash with Greek’s style, and ultimately could have been left out. Most of their work is right on target, but they try too hard in a few cases, creating noisy, loud messes such as the randomly patterned “Thin.” The attention is drawn from the vocals in these cases, simply because the backdrop is too forced. Without these inclusions, “Smell My Talent” would have been an excellent, unique record without noticeable flaws.

No matter how ugly the cover is, don’t let that deter you. It gets a hell of a lot better inside. There are minimal flaws, and what is contained within is quite refreshing. It won’t appeal to everyone, but no one can deny Greek’s originality. I knew it couldn’t get worse, and thankfully, it got much better. Thank God I didn’t have to end this review with some crack about how much “Smell My Talent” stinks. That would have been far too easy.