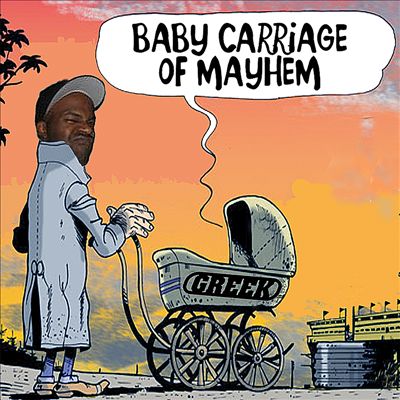 The cinematic strings, which kick off this release of Jimmy Greek, give the promise of a independent release with the values and quality of a major label. Greek, ever the master of polite conversation, starts of by thanking you for listening before he slips into just under forty minutes of near non-stop bragging. Greek delivers blasts in a gravely monotone through his nostrils while simultaneously aggrandising his own skills with tit-bits like:

“The fact is you’re late for my spaceship
I found some extra skill I’m not use, here take this”

As might be apparent from just reading these lines Greek doesn’t display a whole heap of flows here. He eschews silky rhyme patterns in favour of angular couplets, whilst cramming far too many words into a bar. This might be ok on an open mic night, but it shows a remarkable lack of care for your album. The consistency with which he does it indicates he thinks this is his style but it just sounds amateurish. Sometimes its so garbled, when Greek pipes up as his own hype man it feels like it’s to notify you of where the rhyme is. You might forgive this oversight of emcee craftsmanship if his punch lines split your sides. But he just can’t tickle the funny bones, you’ve either heard it before (but better delivered) or it’s simply not that clever. When he tries to get serious and tackle world topics on “Lazergun Revolt” his flow sounds even more stilted as he tries to squeeze fresh rhymes from the same stale list of evils. Never spending more than two lines on the same thing doesn’t advance his cause.

“Lazergun Revolt” also carries the ultimate embarrassment of being outshone on the mic by your own producer. Off Topic’s verse might not plough the lyrical depths, but unlike Greek he rides the beat rather than fighting his way over it. Off Topic is in fact the unsung star of this release crafting a number of promising beats with big bass drums and stuttering snares. He does decent bounce on “Stop Trying to Fit In”, downbeat melancholy on “Smear your pretty little make-up” and golden-era revisited on “Turn it Down or Perish.” Throughout the talent of a versatile but cohesive beat-smith is on display. Combine this with his on mic performances and you wonder what Greek is doing in the studio.

Maybe one of us is missing something here, either I’m missing the joke or Greek is missing the wit and skill to deliver it. It’s all good going guns out at the world, but you need to come with ammunition. Greek thinks he’s firing off heat seeking missiles on the frontline of Hip-Hop but from the sidelines it’s much more like a battle re-enactment.