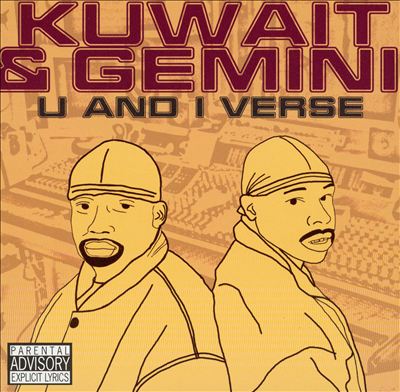 They used to be by themselves back in the ’70s in the Bronx. A few years later they had the whole world watching. It started out as just a local party thing, but it quickly grew into something bigger: the cultural phenomenon known as hip-hop. Sharing their formula for fun with everybody who cared to listen, the b-boys and fly girls in the Bronx gave out a secret that is not theirs anymore. These days, some of them (KRS-One) are mad at where others (Nelly) have taken their invention. But what about the youth living in the Bronx today? What is their definition of hip-hop?

Why don’t we ask rap duo Kuwait & Gemini, an uncle and his nephew who are only three years apart in age. Gemini is 22, Kuwait 19. Not surprisingly, they don’t refer to their borough’s old school legends as their main influences. They simply are too young for that. Instead, they say they grew up on N.W.A, Ice-T, Slick Rick, Big Daddy Kane and the Wu-Tang Clan. In 2002, Kuwait & Gemini are part of yet another rap generation, a quarter of a century after Kool Herc spliced his first breakbeats together. But when you try to jump-start a rap career, history and heritage are not as important, and so these two rappers are more influenced by their peers than by past greats.

And let’s not forget that they gotta ‘represent’, something for which they have reserved a seperate track called – you guessed it – “Represent”:

That ought to tell you that there’s nothing groundbreaking to be expected from Kuwait & Gemini. Like most rappers they are fascinated with rhymes, and so they show that they can rhyme too, without worrying too much about what exactly they are saying. So when they try to explain how they ‘got this’ (“We Got This”), they come up with a chorus stuffed with words that rhyme with ‘got this’. Unfortunately, it remains unclear exactly how they ‘speak logic’, what makes them ‘prophets’, which ‘topic’ they stick to, etc.

With such limited rhetoric, they are in no position to call out “you cats in the industry claimin’ you MC’s.” Because it looks like they’re trying to expose the falseness with even more falseness when they say tired things like “Y’all got guns but y’all run when it’s time to shoot” or “Oh you flossin’? That don’t even impress me / I’m Kuwait the General, flossin’ Bentleys.” These type of arguments don’t go anywhere. It’s up to the point where they plain contradict themselves, checking wanna-be thugs and mafiosos in “Stop” but engaging in exactly the same activities with their incessant gun talk:

“I got a passion for guns, I french-kiss my barrel
every shot keep me hard like that Playboy Channel
keepin’ plenty of ammo like I was runnin’ the Sopranos
niggas respect me, just go and ask the Pineros”

But just when you’re about to write off Kuwait & Gemini as run-of-the-mill rappers who sprinkle their rhymes with a little thug behavior here, a few righteous slogans there, they manage to pick themselves up. They drop more and more lines that might make you reach for the rewind button. Like this demonstration Gemini gives in “Thanksgiving”:

“A hard time survivin’, so we gotta do a lotta livin’
A lost feeling, on and off bitten
look at my rap sheet, cause in the streets it was all written
Y’all cats is softer than lost kittens
trapped in the north with no mittens and died of frostbittens”

With what could be described as ghetto life flashes, they paint pictures that are never pretty, but nevertheless captivating. However, the listener is required to lend these two an ear, despite thinking he’s heard it all before. That may actually be the hardest feat for this duo to overcome. The beats they rap over, provided by Paul Morrison and DJ J.B, will not likely get them there. Like the rappers, most of the production lacks that certain punch that would sweep the listeners off their feet. You usually have one element that sparks your interest, but the rest of the track is plain boring. Only when Kuwait & Gemini lose their lethargic flow and get animated (sometimes even aggravated), does “U And I Verse” get entertaining. Case in point: The unforgiving “Tactics”, the chaotic “Yours”, the futuristic “Wave Your Hands” or the simply funky “Represent”. They get props for the autobiographical “My Life” as well.

Newcomers like Kuwait & Gemini have to realize that personality is the only way to get access to a bigger audience. If they don’t have any, they might as well stop rapping. If it doesn’t come out in their rhymes and flows yet, they should go back to the lab and work on it. Today’s two candidates do show traces of such personality. Right at the beginning of “U And I Verse”, there’s an intimate moment where they just shout out their peoples for a couple of minutes. Unfortunately, what follows sounds like two rappers trying to be themselves as well as trying to be someone else. Trying, and never quite succeeding.

Kuwait & Gemini :: U and I Verse
5Overall Score
Music5
Lyrics5