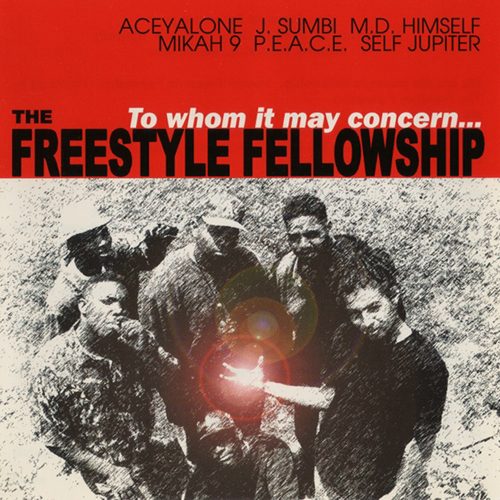 To Whom It May Concern

Freestyle Fellowship :: To Whom it May Concern…

Obscurity automatically gives things an extra layer of reverence and respect. If no one has heard of an album, it must be incredible; after all, no one saying anything about an album means that no one is saying anything bad about it. The truth of the matter is that while a lot of great albums are slept on, there are also quite a few that deserve their obscurity.

So in which category does Freestyle Fellowship’s “To Whom It May Concern…” fall? Is it a wrongfully ignored classic, or a merely adequate record that has gained undue notoriety due to how few copies of it were originally pressed (rumored to be less than 1,000)? To answer that question, I listened to this record while pretending that it was as lauded as “It Takes A Nation of Millions…” or “The Low-End Theory,” a hands-down, no-brainer classic that should be in everyone’s record collection. Even given those high standards, “To Whom It May Concern…” stands up. It sounds remarkably fresh and exciting today, 17 years after its release.

This album is the epitome of jazz rap, and not just because of the jazz samples the group uses. The Fellowship, comprised of Aceyalone, All in All, J. Sumbi, Mikay 9, P.E.A.C.E., and Self Jupiter, don’t rap so much as flow, the words spewing out of their mouths like Charlie Parker licks, complex, intricate, and amazing. They were trained in the art of freestyling at the Goodlife CafÃ©, and all of that practice shows. Aceyalone’s rhyme on “Fantasy” is a perfect example; his lyrics come out effortlessly and relentlessly, never going quite where you expect, but always sounding right on:

“Would you like to be a part of my fantasy?
Fantasy, insanity, vanity, family, Kennedy, can it be?
It’ll be great we can break all laws of gravity
Make room, or fly to the moon on a boom
We can let it get better, get etiquette, adequate, that’ll get sloppy
Ten-four, you copy?
Big jollopy I pop a seed, pop a floppy
Teenybopper, hoppy, hype, my squad’s the gods of the mic
So play vanilla, hammer, shamma-lamma-ding-dong
Killer, slummer, plan a pop song, KA!
But I like breakbeats and beatin’ on the walls of bathrooms
The b-boys b boys forever
Yo, punk- what’s your function?
Robotics, planets, products, annex, got it
Mechanics or sonics, organic, exotic, narcotic
Bought it, forgot it
I jot it down ’til I’m hooked on phonics
So much to do with a touch of double dutch
Of dodge ball, the Taj Mahaj’s right below us
Slow us down and show us the forest
Or a Brontosaurus
I’m a Taurus, poorest one of all
Born in back of a pool hall, a joker
My Pappy’s a penny ante poker player
Who’s a loser, screwser, booser
Livin’ a life of anger
Had one, two, one too many Harvey Wall Bangers
So bungee jump off a bridge and soar
With a rubber baby elastic plastic
Band around your ankle
Fasten up, next stop Banana Republic”

The beats are a combination of jazz, funk, and psychadelica that are banging but never cliche. Even the skits and shorter songs offer an insight into the group’s humor and philosophy. “Let’s Start Over,” which features the group listening to the Triggerman beat, is especially prescient given Southern rap’s dominance in recent years; “We Will Not Tolerate” has the group declaring “We are not your O-R-D-I-N-A-R-Y N-I-G-G-E-R-S;” “Dedications” has the group “livercating” the album to their fallen friends, saying “we must be strong, for the killing of ourselves must stop.”

This was recorded around the same time as “De La Soul Is Dead” and it shares the edge and darkness of De La’s sophomore debut. Gangsta rap was beginning to outshine the jazzier, more positive, more afro centric manifestations of the art form, and a lot of MCs were deeply disappointed by this turn towards the negative. Hip hop was turning into the same tired stereotypes. Why be smart when being gutter sells? Why aim for art when you can go gold rehashing gangster movies? The Freestyle Fellowship retaliated by being just as angry as their gangsta peers. On “Sunshine Men,” they criticize fake gangsters who moved to L.A. from parts East to cash in on the latest negativity:

“Those without talents, but big drug profits
Rap becomes a tool often used in vein
Just like a gun
When they want out of the insane lifestyle
But they want the insane pay
So they pick up a mic, yet they have nothing to say
It’s a damn shame, ’cause they form the pack
Of those who represent my spot, yet they lack
The skill to get raw with words and cold shoot ’em
Stuck in the past, puttin’ raps to a drum computer
Not even worried that the songs not able
‘Cause they got juice and hook ups at big labels
No unique-ness, no goals or dreams
No creativity’s exactly how it seems
As a sunshine man, with plans and a pen in my hand
Recording thoughts and beats for the next man
Even those who live without a clue
I bring the truth to you, it’s not new
To help my cause, the rise or inflation
The incline of western civilization
Words to enlighten and to direct
Brought to you live and correct
From Sunshine Men”

The Freestyle Fellowship didn’t manage to dampen the popularity of gangsta rap, and their criticism on “Sunshine Men” resonates just as clearly today as it did when it was originally released. What they did succeed in doing was inspiring and being part of a community of MCs who shared the Fellowship’s positive message, including the Jurassic 5, Pharcyde, and Lootpack. “To Whom It May Concern…” might be to hip hop what the Ramones’ or Velvet Underground’s first albums were to rock music: an album few people heard, but that inspired everyone who did hear it to start a band and make music of their own.

The only negative thing about the album is the fact that it was recorded on a shoestring budget, and the sound quality shows. The levels aren’t level, it sounds muddy, and the whole experience is akin to listening to a twice-dubbed tape. The question is, would you rather listen to a piece of shallow garbage that sounds crisp and clear, or a genuine masterpiece that is less polished? Personally, I’ll take “To Whom It May Concern…” over Soulja Boy any day of the week.

“To Whom It May Concern…” is an innovative, creative, challenging record, one that pushes boundaries and further blurs the distinction between jazz and rap. The MCs offer some dazzling verbal acrobatics, and a lot of insightful and clever lyrics. This deserves a place next to your De La Soul and Tribe Called Quest albums. Most importantly, it deserves to be listened to, and since it is now available for download on Itunes and Emusic, hopefully it will get a chance to be rediscovered by the legions of hip hop fans who weren’t among the lucky 1,000 who copped it the first time around.

Freestyle Fellowship :: To Whom it May Concern...
10Classic
Music10
Lyrics10