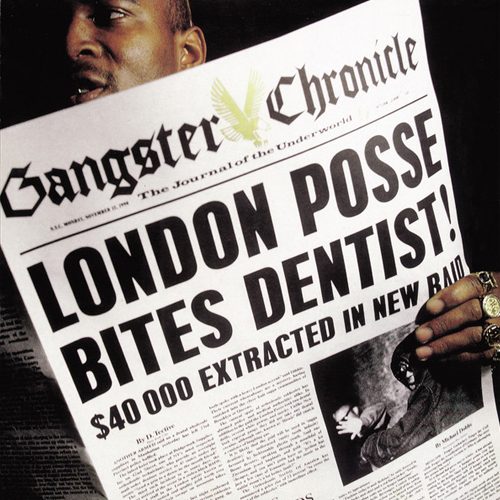 “Gangster Chronicle” was an album that was easily missed when it first came out in 1990. Although it was put out by Island subsidiary Mango, it wasn’t a release you were automatically aware of if you weren’t right there to take the first steps with British hip-hop. 17 years later a panel of experts at Hip Hop Connection magazine crowned it the best UK hip-hop album in history. Those who had missed it the first time around, had since been able to catch up when it was reissued in 2001 with the prefix “Best of London Posse.”

You can find an excellent, in-depth write-up of the group’s history at Jimbo Jones’s Convenience Store. One interesting fact is that the London Posse really came together in the USA while touring with Big Audio Dynamite at the invitation of Mick Jones (of The Clash fame) and there simply being referred to as ‘the London posse.’

Originally a quartet consisting of Sipho the Human Beatbox, DJ Biznizz and MC’s Rodney P (initially known as Rodie Rok) and Bionic, the former two left the group before the recording of the album began, Biznizz being active to this day while Sipho sadly passed away in 2004. Now a duo, London Posse was credited for the bulk of the production, with contributions from key figures of the era’s rap made in England such as Tim Westwood, No Sleep Nigel, DJ Devestate, Twilight Firm and Sparki (the latter co-producing the majority of the original album’s tracks).

The Posse had debuted in 1987 with an eponymous single, followed up one year later with the classic “Money Mad,” an alternate version of which opened the longplayer two years later. Up until that point, the domestic rap scene had been mostly aping American hip-hop. Bionic and Rodney provided a radical counterpoint, embracing their West Indian roots and British identity. There was a strong Jamaican influence in London Posse’s vocals and beats. While Rodney P combined cockney and yardie in a more straightforward rap manner, Bionic toasted more distinctly inna ragga style.

By their own acknowledgment, at the time reggae and ragga were much more popular among black British youth than rap, which makes “Gangster Chronicle” more than just one of UK hip-hop’s first full-lengths, but also an early serious attempt to adopt the artform to British conditions (a process that some would say has not been completed to this day). To rap fans – black, white or otherwise – in the United Kingdom it must have been a revelation to hear MC’s rhyme in familiar accents about things close to home.

“Money Mad,” a galvanizing assortment of siren sounds, relentless drum stabs, ragga samples and digital bleeps and bits, features Bionic and Rodney chatting and chanting about a society where people go to any extreme to get money, “could be a mugger, could a safe cracker / could be a robber, a hitman or computer hacker.” Specifically they look at the streets: “It’s in in the airwaves, on the police receiver / cause every massive got the money mad fever.” They describe that all too familiar vicious cycle of adolescents “doin’ crimes since the times are hard” and police letting their actions be guided by prejudice: “Young youts gettin’ treated like mobsters by the beast / or should I say policeman, and his truncheon / See a blackman, put him in a cell and punch him.”

“I’m talkin’ facts, not lies, not fiction,” emphasizes Rodney, true to rap and reggae’s claim to tell it like it is. While “Money Mad” primarily observes, “Gangster Chronical” is in the midst of action, notably with a black power bent: “I ain’t a token coon, I’m the ruffneck, the one you don’t wanna meet.” Over a track that audibly spells underworld with a low piano loop and dramatic synths, the duo defies those who “expect a nigga to be a smilin’ figure with a grin and a watermelon / but somebody oughta tell ’em / that youts are raggamuffin to the maximum.”

They venture deeper into the economic realities with “Live Like the Other Half Do,” which makes mention of Prime Minister Thatcher’s controversial poll tax. “All I wanna do is live like the other half do,” they plead over cheerful horns and a pumping bassline. But the depressing content contrasts the upbeat musical backing, as they mainly recount bad experiences with law enforcement, Bionic concluding his tale with “Another case of racist police brutality / and this reality has changed my personality.”

“I got a boulder on my shoulder, not a chip,” declares Rodney on “Live Like…,” a fact which becomes explicit throughout “Gangster Chronicle.” They expose women of a certain look and lifestyle on the Little Lenny-inspired “Livin’ Pancoot,” the harsh tone occasionally tempered by positive images. “Oversized Idiot” is as outspoken a rap tune as they come, Bionic getting down right to business with “I ain’t a US replica, I don’t emulate.” He puts it more sharply on “Jump Around” when he observes, “You fuckin’ wanker, why do you talk like a Yankee in a dream world?” So it’s good that “Original London Style” (accompanied by a perfectly fitting Special Ed soundbite) voices the sentiment on a positive vibe, the track by the way (like their very first song) suggesting that the two discovered the advantages of their accent on their overseas trip in the ’80s.

The album winds down with “Tell Me Something,” a too obvious attempt at a crossover as the dominant pop jazz beat and vocal Marlena Shaw interpolation suffocate the rappers’ reasoning that itself circles too much around negative female stereotypes. A much better representative of the quality hip-hop-inspired dance tracks the UK produced at the turn of the ’90s is the reissue addition “Jump Around (Censored Mix)” courtesy of Nomad Soul (Dobie and Howie B). Further post-album bonus tracks on “Best of London Posse” are cult favorites “Pass Me the Rizla” and “Funky Rhyme, Funky Style,” a sidesplitting exercise in womanizing that begins with Bionic’s oft-remembered opening line “I creep up on cheap sluts like cellulite.”

And then there’s “How’s Life in London,” a track worthy of all the attention of the international hip-hop community, not only because of its global and at the same time local orientation but because it’s simply a monster of a rap track. Producer Dobie samples the famous Big Ben Westminster Chimes followed by the announcements “BBC World Service presents” and “This is London.” A Marvin Gaye soundtrack orchestration segues into the main beat, a pumping track that alternates various melodic but stinging loops. But what’s truly phenomenal is how naturally Rodney Panton and Jeff Tetteh shoot the uptempo breeze filled with memories of adolescent pasttimes and conquests, topped by the international flair of the hook. It’s one of rap’s most enthralling back-and-forths ever and over all too soon.

But “How’s Life in London” (which coincided with an appearance on Yo! MTV Raps, where the duo was interviewed by Fab 5 Freddy) announced a second album, one that probably would have been punchline-heavier and less raggafied but sadly never materialized. (“Best of London Posse” fails to collect all these gems, including the stupendous “How I Make Papes.”) As for the original album behind this reissue, Hip Hop Connection summarized in 2007:

‘”Gangster Chronicle” puts you inside a world – just as, say, “Illmatic” does. It’s a world so distinctive in its language and sound that it goes beyond anything you could deliberately conjure up as a concept – this is no through-narrative hip-hopera about life in Battersea circa 1990. It’s something infinitely more evocative, the result of the coming together of two of the most charismatic emcees ever – and when we say ‘ever’, we mean ever, as in from anywhere and in any time – who in conjunction, almost unfeasibly, undergo some kind of charisma amplification and who, rather than labouring over elaborate concepts, just talk about what to them IS.’

This begs the question why after so many years one of the nation’s very first rap albums is still considered the best. One reason may be the constant dispersion of the hip-hop template into genres that either focus more on the single song format and the instrumental side of things, or are simply deemed not ‘hip-hop’ enough – that very definition of hip-hop ironically often being an American one. (Which makes it particularly refreshing to hear Bionic dismiss someone’s “narrow-minded hip-hop” on the “Jump Around” remix.) Perhaps it’s also due to the fact that the UK so far has failed to produce a single rap icon with a string of releases to back it up. Even Rodney P, who legitimately can claim legend status for his contributions to UK rap during and after the London Posse days, has still only one solo album to his credit. But while the sheer significance as a blueprint for British hip-hop may have played a part in it winning the poll, it is frequently brilliant and a great example of rap being able to capture and foster what Rodney P calls a “livin’ lingua,” a prosperous language. One that speaks to various audiences – from LDN, where “all the bad boys know my diction,” to “Brooklyn or the Bronx where nuff gals them a jocked me / wanted a part because I dropped the cockney.”