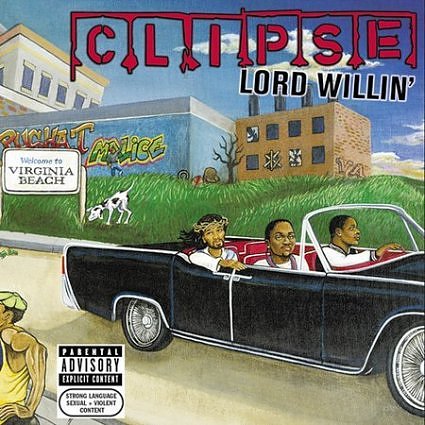 When Clipse dropped the single “Funeral” a few years back, few could have guessed the group was destined for big things. The music itself was decent, the video was a tadoverdramatic, but what stood out most was that rapper Malice showed a flair for visually detailed narration in the G. Rap and Nas tradition. It may not have blown him and his crew up to the next level but it did earn him some points in the ears or fickle rap listeners:

“Spare my family the details on how they found me (yes)
Vigil by candlelight and gather round me (farewell)
And talk about how I would lounge with fly women
How I was flossin in clubs in fine linen (preach on)
Hoppin in them ill whips with chrome spinnin
Malice was true to the game for 9 innings (ha ha ha)
We love sinnin but now I answer for that
Apologize to my fam I got you all dressin in black (I hear ya)
A long line family and friends they signin in
My niece singing solo, organs and violins”

People probably suspected that Clipse was a New York crew based on their steelo. There are advantages to being from Virginia though, because it’s a state home to pioneering hip-hop producers like Timbaland and The Neptunes. And as for the latter, given the numerous references to Virginia Beach in the liner notes to “Lord Willin'” it’s likely that they are even from the same city. At some point the ubiquitous hitmakers hooked up with the underground thugs, and this debut album is the child of their union. From start to finish, Chad Hugo and Pharrell Williams do ALL the music. The first single “Grindin'” exemplified why 2002 is the year of the ‘Tunes. Not since LL Cool J’s “I Need a Beat” has rap been so beautifully stripped down to it’s rawest elements. A thunderous drumtrack rumbles across your ears, punctuated by handclaps and staccato BOOM-DA-BOOM beats like a door slamming in your face. Williams does his best to warn listeners what you’re about to experience that “the world is about to feel somethin that they never felt befo'”; but when Pusha T opens the song with his witty cocaine raps the experience is almost vintage 1980’s:

“Call me subwoofer; cause I pump +base+ like that, Jack
On or off the track, I’m heavy cuz
Ball ’til you fall cause you could duck to the fetti govs
Sorry my love, what I’m seeing through these eyes
Benz convoys with the wagon on the side
Only big boys keep deuces on the ride
Gucci Chuck Taylor with the dragon on the side
Man, I make a buck, why scram?
I’m trying to show y’all who the fuck I am
The jewels is flirtin, be damned if I’m hurtin
Legend in two games like I’m Pee Wee Kirkland
Platinum on the block with consistant hits
While Pharrell keep talking this music shit”

And talk that musical shit, he does. The chorus is a breakdown of the stripped sound that sounds like a series of claves being snapped together to make a melody, or an incredibly talented beatboxer who can imitate the sound, or a computerized reproduction of BOTH. The aforementioned Malice is back in verse two, and with the Neptunes at his back he comes off a bit arrogant, but with plenty of good reason:

“Patty cake, patty cake, I’m the baker’s man
I bake them cakes as fast as I can
And you can tell by how my bread stack up
Then disguised it as rap so the feds back up
…
And my weight, that’s just as heavy as my name
So much dough, I can’t swear I won’t change
Excuse me if my wealth got me full of myself
Cocky, something that I just can’t help
‘Specially when them 20’s is spinnin like windmills
And the ice 32 below minus the wind chill
Filthy, the word that best defines me
I’m just grindin man, y’all never mind me”

The icing on their “cake” for the listeners at home was the hook the Clipse performed in a sing-song voice between verses. Silly but effective, it was hard not to want to join right in crooning, “Grinding! When you KNOW what I keep in the LI-NING.” Success! The Neptunes had done it again, and this time they blew up a group from their home state. Now all that was left was for Pusha T and Malice to capture lightning in a bottle and capitalize on the sudden rise to fame “Grindin'” brought. A popular mixtape remix soon did just that; the well known alternate version of “Grindin'” featured Baby, Lil Wayne and N.O.R.E. It’s included here, as well as a “Selector Mix” featuring Sean Paul, Bless and Kardinal Offishall.

Clipse was more than “Grindin'” before “Lord Willin'” was released though and they have more than that to offer on this CD. “Young Boy” features brassy horns and the trademark Curtis Mayfield falsetto Pharrell is becoming famous for, but it’s the childhood narrative of becoming hard that draws you in. “Virginia” is the obvious successor to the track and having it follow is a nice touch. It’s a slow and dark track with “heat like Carribean summers” that shows a side of VA that isn’t just for lovers:

“Malice? He think he hard, tough guy of the click
And Pusha he walk around like he swear he the shit
You right on both counts, bitch! Clipse is us
And there are some things that you don’t discuss
Don’t ask me bout The Neptunes and what’s they fare
Don’t ask about the loud screamin chick with the hair
Don’t ask about my music and how that’s comin bout
Don’t ask about my album or when’s it comin out
Cause I feel like you really bein funny on the sly
Now face down layin on yo’ tummy, or you die
I tried bein humble – humble get no respect
Now the first sign of trouble that’s a hole up in yo’ neck
Plus what I look like spendin my nights in jail?
I could never be a thug, they don’t dress this well”

Is this a thugged out album? No question. Clipse could be labelmates with CNN and nobody would blink an eye. That alone is taxing on some releases but Clipse play their position perfectly and even poke fun at their status with lines like “Watch how them hollows straight rattle ya shit/and I’ll leave it to y’all to freestyle and battle ‘n shit.” Chad and Pharrell balance this script perfectly with music that gives their war torn raps a cinematic soundscape. From the laid back piano style of “Cot Damn” to the bizarre yet funky electronic “When the Last Time” and the cartoonish violence of “Ego” it’s all good. Jadakiss and Styles even drop in over the smooth beats and sporadic steel drums of “I’m Not You,” with ‘Kiss stealing the show on his rap:

“Whoever said birds fly South for the winter’s a damn lie
Got ’em right here, and if I don’t like you the grams high
Take it or leave it, soon as a fiend taste it they need it
They could smoke it right in front of you to make you believe it
Prolly think I won’t murder you the way I smile
But I’ma take a lotta shots, A.I. style
And Jada, the name is filthy
But so what, the motherfuckin game is filthy
You know what, my mom and my pops really did a good job
But it was the montega and the ‘caine the built me
So I, could never hate on another brother
God is great, the devil is a motherfucker”

This album is a winner thanks to the raps of Pusha and Malice meshed with the cutting edge Neptunes beats found from start to finish. “Ma, I Don’t Love Her” featuring Faith Evans might be the next to blow, but almost any track on this album could bump on radio with some careful editing or a radio clean version. There will be haters of course – those who don’t like the ‘Tunes and think they’re overrated, those who surmise that Clipse is glorifying violence, and those who think this group hasn’t paid dues. Leave ’em alone jack, they’re grindin’. They’ve been at this hustle for a while now, and thanks to a geographical accident (or if you prefer a happy coincidence) they are poised to bump in Jeeps and Landcruisers until 2002 is finished. If they come back this good or better in 2003, the Clipse will be in the upper echelon of rap stars for a decade to come, and their producers to boot.