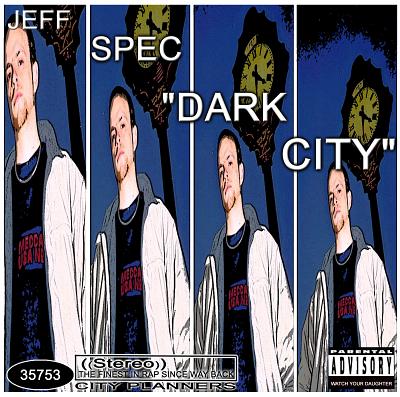 It’s hard to find a balanced indie hip-hop CD, meaning the MC or group has a nice flow and rides tight, well-produced beats. More often than not the rhymes are good — or, at the very least, witty — but the instrumentals sag like a St. Barnard’s face. Ironically Jeff Spec, a white guy from the Great White North, has the opposite dilemma.

Being many albums deep now, Jeff says “let me show you how the up coast rocks,” the up coast being Vancouver, British Columbia, Canada. He’s got it half-right. Sonically Jeff’s album, almost entirely produced by him, is like a day at Old Country Buffet, a taste of Primo here, a little RZA there.

“SetUpShop (part two),” for instance, sounds like the Alchemist-produced “Keep It Thoro” stretched, flipped, sped up and crunkafied. Imagine Prodigy’s original song made more bouncy, like if someone was having too much fun with the sample machine and kept hitting the damn repeat button — and actually made a good beat. Hate to say it, but it almost sounds better than Prodigy’s classic cut.

Then Jeff gets jazzy on “Something Tells Me,” which M.O.P. could spit a tight rhyme on. The tickling piano loop and quick falsetto sample gives him the opportunity to talk about — gulp — “bitch-made” reviewers. It’s a stand-out cut showing that Jeff can slow down, articulate himself and let some shit off his chest. “Rock Off,” on the other hand, grinds like a gritty remix of Jigga’s “Can I Get A…” Here too he gets a nice flow on:

“Ay yo, I don’t need my whistle or rocks
Matter fact, even my name on the watts
Just get my little respect on the block
No advance check on lock
I don’t need anybody else to get my money
I collect on the spot
Motherfuckas, yaw some bloodsuckas
Still I got love for ya
Though you wouldn’t give me mine if it was up to ya
No, it ain’t Deep Cover
More close to common knowledge
Yaw some deadbeats
I’m gonna give you want you wanna, holla
Now what you wanna colla?
Main man ain’t drivin’ a Rolls
Been rollin’ and robbin’, drivin’ them ozs
To go places, getting new figures and new locations”

The tight cadence on “Rock On,” however, is more the exception than the rule. Jeff’s biggest flaw is how good of a producer he is — his great beats make his average flow sound flatter than a high-top fade. The opening track “The Sound” gets your mouth watering with a nice bassline fit for a Isaac Hayes ass-kicking, but then Jeff’s voice seems to crash the wave created by the menacing beat. Then “Bounce, Bitch,” which could have easily been the party cut with its popcorn-tasty synth beat, gets stale on Jeff’s offbeat flow. Only a few of the 18 joints are good in both rhyme and beat.

This is a tough call — like having five cents at a public phone — but the CD is worth at least one listen on the merit of beats alone. Take it like Pete Rock, Swizz Beats or other producers who get on the mic. Their real skills are on the boards. Hopefully Jeff recognizes his talent, too.