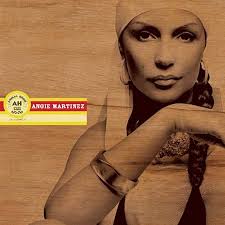 Do you know Angela Perez of Dope House Records? Did Hurricane G ever rise above obscurity? These latina rappers may or may not be familiar to you, but odds are you know who Angie Martinez is. She’s a radio personality, a glamour girl, AND thanks to last year’s debut album “Up Close and Personal” she’s also a rapper. The content of her release reflected the title – she wasn’t afraid to dig beneath the surface and talk about the hardships along the way to achieving her success, but despite great duets with the likes of Jay-Z and Wyclef the album never hit it big.

“And very few I keep close, that’s how you keep from the scars
You gotta move like a ghost, cause some people are stars
And all of a sudden, they forgot who they are
But look at me, I’m still Angie…”

What has helped make Angie a success over the years are the same values she continues to embrace on “Animal House.” She knows who she is and she’s not going to change that for anybody; instead she’s relying on her charm and her own animal instincts to bring you to her. Many labels would abandon an upstart artist after a debut album that was only mildly successful, so Elektra’s decision to put out a follow-up is as refreshing as Ms. Martinez herself. She still corrals gorilla-sized talent into the house to help her make hits: Buckwild, Scott Storch, Ski, Salaam Remi, and even Rick Rock on the lead-off hit single, “If I Could Go”:

“If I could choose a place to go, it gotta be far away
From here a wicked crossover like Hardaway
Somewhere outside the states, where tomorrow’s like today
And I’m out in the space, where nobody else can stay
And if I can go – witchu
Then I’ll go get the ticket right now if that’s cool”

Angie’s song is a playful ode to sexual escapades and romantic vacations all rolled into one – a little something for any interpretation you want. What’s hard to mistake though is how her rhyming partner Sacario sounds eeriley like Jay-Z, and how he is absent from this release. In fact, the sophomore album significantly pares down big name cameo vocals while many that do appear reflect hispanic pride. Tony Sunshine sings vocals on “Fucked Up Situation,” Noreaga rhymes with her on the salsafied “We Can Get it On,” and Fat Joe works with Sacario on the “Live Big Remix.” Other notable guests include Missy Elliott on “What’s That Sound” and Petey Pablo on “Waitin’ On.”

The self-assurance Martinez feels on the mic and the quality of the beats are definite strengths on this second LP. Unfortunately 3 of the 14 tracks are wasted on needless skits about TRL and the “Lifestyles of the Big and Famous.” It’s a shame because the time could have given to tracks like “Never,” a not-so-surprisingly deep track with a punchy beat by the previously unknown Dirty Swift. He laces together a smooth beat with an eerie chorus, and Angie shows the wisdom of an industry veteran who has been touched by a hard knock life:

“I can’t get budged; cause when your best friend is the jury
Bottom line is you can’t get judged
And the last line went over your head
So you probably never know ’til you dead
Either way, what I said is real
[…]
And I’m not being cocky cause I worked my way up
And even though it hurt, never gave up
Went from handin out flyers to #1 major, I don’t respond back
I’m about dollars, hold your two cents saved up
Dropped my first album, never rocked in my life
Did everything on my own, wrote the songs, hit the mic
Picked the beats all night, stayed up, got it right
Minimal help, felt alone – now you got a problem? RIGHT”

While Martinez may never earn the reputation of a superb lyricist, she definitely deserves the reputation of being 100% honest and of using her God given talents to their fullest. There may be other female rappers with more tongue dexterity, verbal acuity, and more hot shit, but Angie Martinez keeps quietly making albums you can respect. Her music is not just by latinas for latinas, it’s a slice of her world that she’s sharing with everybody she can reach, and it’s a pleasant way to spend an hour. Martinez is malleable – coy when she wants to be, sexy if she feels like it, but not afraid to wild out when backed up to the wall. In her “Animal House” you never know if she’s the kitten or the lionness, but it’s a risk worth taking.