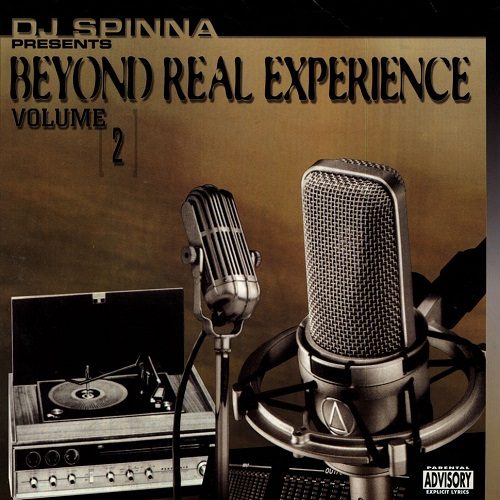 The title “Beyond Real Experience Vol. 2” implies that a “Beyond Real Experience Vol. 1” was released commercially. It does exist as a promo, but not many have heard it. Spinna did put out “Heavy Beats Vol. 1” though in 1999, a compilation on Rawkus featuring names like Kweli, Thirstin Howl, and Eminem (back when in the days when you might see him on a Rawkus release), and it was tight, so I approached this Vol. 2 with as much respect as should be paid to Vol. 1. Besides, DJ Spinna has been releasing so much good material as of late that I knew he hadn’t lost any inspiration. I’m glad to say that especially next to a lot of recent releases in both “underground” and mainstream hip-hop, the new Spinna release is for the most part a refreshing experience that is stuck in my stereo. “Vol. 2” benefits from spirited performances from artists that aren’t resting on fat contracts and endorsement deals. Sadat X, Guru, and Mr. Complex are the only names that were instantly recognizable to me, whereas I had to dig for a second to recall MCs like Shadowman, El-Fudge, Skam, and the Jigmastas. As far as Dynas, Ha The Jet Black, Akil, and Suiken, I have to admit I had never heard of them, though it appears that with the exception of Suiken, they make up the BX Crew along with Shadowman and Skam. The artists perform with each other and alone, trading and sharing songs so that almost every rapper has a recurring role on the album. It gives the LP a solid feel that is often absent from DJ compilations, and sidesteps the easy folly of creating a disjointed collection of tracks.

Spinna has a reputation for releasing surprisingly long albums, and while this one is no slouch at eighteen songs, it’s not a three disc set or twenty-nine song affair like he’s been known to make. Still, it is an ambitious amount of music for relatively low-profile names to handle. I like to see artists really step up and seize an opportunity or take a risk, and this album has some verses spit by the best brand of rapper there is: hungry and young, with something to lose. The first cut, “Rap Shit”, is held down solely by Shadowman over a nice beat by Spinna. Bouncy horns and snappy beats give the song a crisp feeling that is perfect to start off the album. Shadowman gets instant props from me for some excellent, honest lyricism regarding rap music.

Dynas does a nice job on “Spittin” over a fairly tight Nick Fury beat. Akil appears on “Stand Up” with a positive message the he uses to bless another intriguing beat.

Skam hooks up with Nick Fury on “Mekanism” and shows off a tongue-twisting flow that reminds me a little of Del. He’s got his own style and excellent breath control that keeps his distinctive voice rhyming smoothly, and from what he showed me on this CD, he is equal parts playful and serious.

“Now you niggas know I don’t drink
But my favorite Alkaholik is Tash
Not in it for money
but what’s the matter with cash?”

As “Beyond Real Experience Vol. 2” progresses, the highlights just keep coming. There aren’t any bad songs on it, just a few that don’t move me as much as others. Both Guru and Sadat X drop solid verses with the Jigmastas on two separate occasions, but make no effort to steal the show. X gets his own track that he holds down like he always does, further solidifying his reputation as a reliably original MC. El-Fudge and Mr. Complex turn out an I-love-my-moms jam that is unexpectedly heartfelt and honest in “My Momma,” and the Jigmastas drop a gem with “Stones,” which they boast is the “world premier.” Shadowman pops up twice more with solo joints on “My Style” and “Breathe,” two more songs with two more sick beats that he positively rips. After hearing these Shadowman songs, I felt embarrassed that I wasn’t more familiar with him, but that’s what DJ comps are supposed to do- introduce you to sick rappers who aren’t that famous. Suiken raps on the last song, “Can I Kick It”, in some other language that I really can’t define. At first I thought it was Japanese, then I thought it was French, and then I realized that I had no idea what I was hearing except that it sounded pretty nice.

The beats on this album are fairly original overall. There are a few that stand out, but there is an obviously air of thoughtfulness that defines both the production and the album as a whole. “Beyond Real Experience Vol. 2” is fronted by a DJ that makes obvious his love for good hip-hop and talented young rappers, and Spinna’s enthusiasm is mirrored by the artists that guest on his tracks. The result is more than an interesting concept or a collection of good ideas- the result is an experience that is as artistically unified as each individual artist is capable.