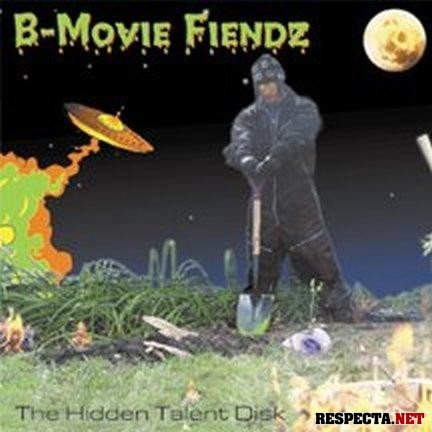 If the numerous goolish and sometimes even gory CD covers are any indication, quite a lot of rappers can relate to b-movies. The majority of this cheesy album artwork is designed in the Bay Area and the South, but you also have people like Detroit’s Esham or New Yorkers Necro and Cage who are clearly influenced by low-budget filmmaking. An increasing number of rappers even shoot their own straight-to-video flicks, resulting in a sub-genre that a video store clerk might advertise as “Invasion of the B-Movie Rappers”.

Chicago’s rap act B-Movie Fiendz certainly got the artwork right on 1999’s “The Hidden Talent Disk”. But b-movie freaks expecting some kind of “Guess the B-Movie Reference” game will be disappointed. There’s the occasional reference, obviously in “B-Movie Fiendz” (f. Metamo of Rubberoom) or “Puppet Master M.C.”, but there are no bloodsucking freaks, no flying guillotines, no killer klowns from outer space appearing on this album, just a rapper who – oddly enough – calls himself Johnny Puertochinko (formerly known as Agent Johnny Quest).

But don’t worry, there are still weird things going on here. Time and time again you wonder what this rapper is about. He opens up “The Hidden Talent Disk” with the help of some musicians who pop in and out of the mix throughout the album. Intentionally or not, they sound like a b-movie band. Which could be a good thing, but here it isn’t. They jazz it up on the “Jazz Fiend Swingtro”, they bring the funk on “Puppet Master M.C.”, they rock you on “Stomp”, they take you out to the countryside on the “Hickbilly Outro”. These selections can (and have to) be taken with irony. But “What I Wouldn’t Do ’99” sounds like the ad hoc session that “Freestyle #7” is.

Whenever the beats are programmed the tradional way, they are immersed in bass, muffling everything out. Some are just plain repetitive, but Mic One actually comes up with a nice track for “Dirty Pair” (scratches, breaks and varying sounds all included), then brings back fond memories of 1997 when the underground sound wasn’t so standardized with “Juggernaught”, while the piano-driven “Streetwise” and the hysterical “Uncivilized” are pretty much standard underground fare.

As for the rapper, from his introductory verse on “Dirty Pair”, you would expect an all-out attack on your nerves:

“It’s Johnny Puertochinko, don’t get the name tangled
or else I start trippin’ like I got sprained ankles
The game mangles MC’s like elevator crashes
scarin’ the shucks out of ducks like alligator splashes
in the swamp, the Man-Thing drowns out the comp
while on the sidelines I’m cheered on by pom-poms
Don’t front, you know you wanna do the wiggy-wiggle
My nickel-plated mic does more than just trickle
it flows like Niagara, grows like Viagra
hit you with 1000 body blows until you stagger
fractured, ruptured, splattered out your structure
Run up on ya, bear-hug ya, bite ya, head-butt ya”

Sounds like something you would want to witness. Unfortunately Johnny Puertochinko flows with a funny inebriated style and still never reaches Drunken Master status. His lyrics show he’s been to the battle ground, but the way he delivers them makes you wonder if any of his battles were successful. In his mouth, potentially harmful lyrical darts turn into a thick paste of filler material spiced up with punchlines.

If Johnny Puertochinko does have a hidden talent, “The Hidden Talent Disk” did not yet unearth it. Like so many MC’s all he really cares about is rhyming. Even in the only song of substance, “Puerto Rico”, he can’t switch off:

“Walkin’ on the beach I see tons of punani
Puerto Rican mamis as the sun shines upon me
revlievin’ on vacation, but mental battles haunt me
spirits of MC’s passed all come to taunt me:
should I drop another record, does anybody want me?”