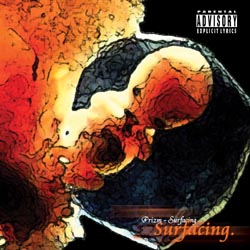 For a rapper, the decision to call oneself “Prizm” is an interesting one. The dictionary definition of “prism” contains a description of an object with many faces, but the word itself comes with interesting connotations. When light goes through a prism it is distorted, and what comes out is never the same. So the choice of this particular title hints that its bearer is both versatile and deep, and has a lot to say.

Prizm’s second album, “Surfacing,” shows just that. He covers almost the entire spectrum, from battling to soul-searching and various points between. The Canadian emcee opens with “One, Two, Three,” a lightning-fast banger with bouncy production supplied by Decline. “The Game of Life” follows with more of the same braggadocio:

“With my mic in my right
Don’t need no hype, man
Y’all can keep your gimmicks
Keep your mic stands and trife plans
Its just me taking the stage
Already ahead of the pack
Now I’m breaking away
Saving the day
Dropping knowledge with original flows
The lyrical pro
Already steady killing you hoes
Jacking for beats
Everyday without a style of your own
Forget that weak shit
Now it’s two thousand and four”

Later in this same verse, he suggests that he is better than Jay-Z, Kanye, and Eminem. This is ludicrous, of course, and he doesn’t do anything spectacular to back up his claim. Making that comparison comes off like a desperate attempt for attention, and stands out for that unfortunate reason.

After his introductions, Prizm explores romance (“Dear Love” and “Perfect Woman”) and a variety of other topics. He reminisces on the excellent “Lost Time,” but the track is propelled more by the soft beat than his rhymes. “All I Want” provides us a vision of his aspirations, but his lyrics are far from riveting, leaving the beat to carry the tune. The bottom line is that Prizm is not a great lyricist, and he covers no new ground in his rhymes throughout the LP. Credit is due for trying to squeeze such introspection onto his sophomore effort, but he doesn’t give many personal details of his life. Instead, he settles for broader statements such as “once upon a time I used to trust in the truth/now at times at night I really feel that nothing is true.” Maybe he is too lazy to explain what made him feel that way; the result is that the line doesn’t really accomplish anything.

While his rhymes leave much to be desired, the beats carry the album. Laced mostly by Johnik and Prizm himself, each track is appealing. If anything, the music suffers from being too uniform, as there is an abundance of simple rhythms and silky loops. This fits well with Prizm’s vocals, though, which rely mostly on quasi-personal insights. Though there isn’t anything lyrically exceptional, the beats and rhymes mesh well together. The result is that the disc is very easy listening.

In the end, each beat will get your head nodding, but this can’t save “Surfacing” from its own mediocrity. There are no serious flaws, but a lack of compelling moments drags it down. Prizm lives up to his name, spouting rhymes on just about everything. However, he still hasn’t developed a way of clearly relating and describing his opinions and emotions. He is an adequate battle rhymer, but when he tries to venture further, he gets stuck. A similar fate has befallen many rappers, so it is no surprise that it happens here. Nevertheless, the production is mellow and catchy, making it the highlight of the album. He has the voice and flow, he just needs to develop his subject matter. He also deserves credit for trying to bare himself to the listener. With any luck, his third album will set things right, and we can all get to know Prizm a little better.