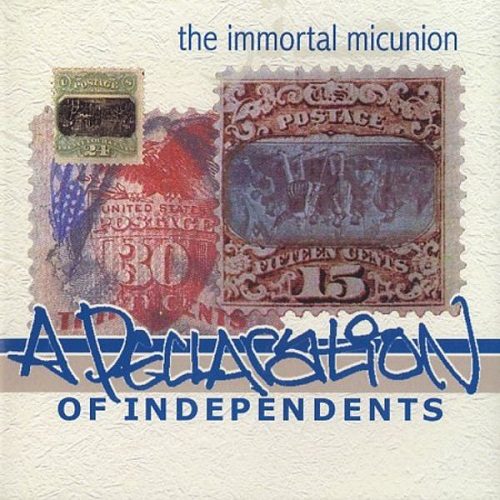 A Declaration of Independents

The Immortal Micunion :: A Declaration of Independents

There’s a lot to be said for first impressions â€“ they always seem to last. That’s why authors strive for strong introductions to their novels, why James Bond movies always begin with huge special-effects laden action sequences, and why they never let the fat lady sing until shit’s over. (It’s also why you never seem to hear U-God until something like track 6 or 7 on most Wu albums…) Obviously, the Immortal Micunion are familiar with the idea of getting things started off on the right foot. The first verse we hear on their latest collection are courtesy of Furious, and let’s just say he doesn’t mince words. Check out a piece of his paragraph from the opening anthem, “Independents”:

“…This year, I declare war on the Industry
Fuck cristal, fuck weed, and fuck Hennessy
Fuck Jay-Z and his ‘fuck you, pay me.’
Fuck Dr. Dre, Elton John, and Slim Shady”

Okay. So he gets his point across. But does this first impression last? Definitely. To say that the Micunion are fiercely independent and anti-establishment would be a colossal understatement. The day any of these cats signs himself over to a major label is the same day Satan learns to knit himself a sweater, because Hell would have to be FROZEN over. In a sense, this is a shame because better distribution means more people get to listen, and everyone deserves to hear music that’s this good. At almost a dozen men deep, the Immortal Micunion is absolutely brimming with talent, and surprisingly, the number of people involved doesn’t water things down at all. This is the type of hip-hop that underground heads go nuts for. The type that MuchMusic, BET, MTV, and most likely your local radio station just don’t seem to like. I’m talking about uncompromisingly witty and creative MCs, ill production, and DJs that sound like they’ve been scratching vinyl since birth. Basically, these guys know what they’re doing, and damn they do it well.

Sonically, “Declaration” is a long and winding road. Including the intro and DJs-only “intermissions”, this is a 20-track package that spans 73 (!!) minutes. That in itself is not unusual for a modern rap album. However, what is very unusual is the almost complete lack of filler-bullshit that we’re used to. The secret lies in the varied styles and sounds from track to track. Of course there are the tried-and-true straight up braggin’-ass rap tracks (“The Spotlight”, “Back 2 Basics”), and the hilarious joke track (“American Pie” â€“ a trip to a strip club that made me laugh out loud) but it goes beyond that.

The Micunion’s members all pride themselves in their inventiveness and with good reason. The best moments on “Declaration” are when they take a more unique approach. Case in point: Ajent O’s brilliant “Metaphor Metropolis”, a conceptual track that presents “hip-hop utopia as reality.” Peep:

“I live in Metaphor Metropolis on Simile Street
I work at a music store, it’s called Gimme a Beat
The native language of my land is called Ebonics
A tongue that move fluent with a broke-down cadence and smooth phonics
People here is real diverse but share shit in common
We all binded by this hip-hop shit… we on it.”

That’s what I like to see. Rap cats out there, can we see more of yall being creative like this, please? Thank you.

“Crime in the City” is another intriguing cut that’s entertaining to listen to. It tells the story of a liquor store stickup turned to murder, and from three different points of view. And somehow, with just one verse a piece, Furious, Ningishzidda, and Jargon all make their respective characters come to life. We hear from a cat who’s been laid off and gets revenge through a gun, from a cat who just got a huge paycheck and goes to buy some juice, and from the store clerk who realizes with sadness that he’s powerless to stop this crime. Plus, I must give daps to Speed for spitting one of the best lines I’ve heard in a while on “Live From Somewhere”: “…You could never stop this here/Even if you hit up, down, left, right, and fifty men appear, like Contra.”

I can never be mad at old school video game references in raps. And please don’t come away from this review thinking that the album is all about lyrics. The beats here are every bit as competent as the rhymes. From the haunting and soulful “Circle of Life” with its ethereal chimes and pipes to the old-school thump of “Food for Thought”, the music will keep you moving while the MCs do their part on the mic. And like I said before, DJ’s Tommee, Lopro, and Cutler prove why the backbone of hip-hop is indeed the DJ. Sadly, there’s just not enough cutting and scratching on this record for my tastes, but that’s really my only complaint.

“A Declaration of Independents” is a hip-hop purist’s dream. It’s got beats, rhymes, scratching, and above all, a level of quality that’s undeniable. The Immortal Micunion are “fighting for independence” (or is it independents?), and I for one support them as they fight the good fight. If you support creativity and innovation in your music, then you should support them too.