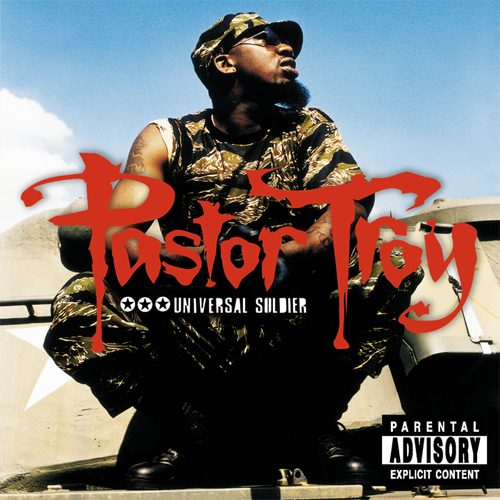 Some may consider his name sacrilegious, when in fact it’s only one generation removed from the truth. Micah LeVar Troy’s FATHER holds the true title as a man of the cloth, but his son combined a dirty South rap style with the influence of poppa’s religion and adopted the moniker (presumably with his blessing) to describe his style. It’s this dichotomy between heaven and hell, gospel music and gangster rap that fueled his rise from a young whippersnapper to a nationally recognized MC. Well that, and a feud with Master P over getting his national debut distributed by Priority Records. That’s in the past now, because Troy is not only on Universal Records, he’s a “Universal Soldier.”

Troy is pulling out all the stops this time. Timbaland produces two tracks including the lead single “Are We Cuttin’,” Lil Jon does three joints, and Jazze Pha does two songs as well. Surprisingly names that may not be instantly recognizable provide some of the best work; such as Tony “T-Cap” Sims on songs like the catchy piano bounce of “If I Wasn’t Rappin'” and “When He Comes” featuring the ELDER Pastor Troy. The aptly named Church Boi also provides the smoothed and simple knock of Troy’s feud sequel “No Mo Play in GA Pt. 2.”

The music is definitely Troy’s strength, because it’s designed for people who like to get crunk and throw bows. In all likelihood, many of these tracks will be on Screw-style slowed-up tapes, if they aren’t already. The bad news is that as an MC, Troy doesn’t have the lyric writing wit of Lil’ Flip or the storytelling ability of Scarface. As a slow-flowing rapper, he doesn’t even have the charisma of Eightball. Calling Pastor Troy’s rhymes “simplistic” is an understatement; but the words of “If They Kill Me” should suffice as an example:

“This is a song, for them niggaz talkin bout killin me
Somethin to listen to, before I go on my killin spree
Y’all niggaz ain’t shit to me, a bunch of followers
And when I catch yo’ ass, I’ma swallow ya
Bitch I’ma bury ya! The more the merri-er
I pray ya, out witcha niggaz, they can carry ya”

Troy’s lanky drawl changes about as often as rednecks change brands of beer, which means the Pastor gets an A for consistancy and an F for musicality. It’s somewhat ironic that this son of a preacher man raps about more violence and mayhem than most of his No Limit rivals put together, yet somehow manages to make it half as interesting. When the good Pastor injects a little more thought into his rhymes, on songs like the conceptual bonus track “Vice Versa,” he provides a glimpse into what an album with dirty beats AND tight lyrics could’ve been. Contemporaries like Miracle and Mystikal do the “militant” Southern rap style of raspy yelling better, so what’s left for Pastor Troy? Not much. If you completely ignore the words “Universal Soldier” is a good album, but they’re so monotonous it’s hard to do. Troy, leave the preachin’ to dad.