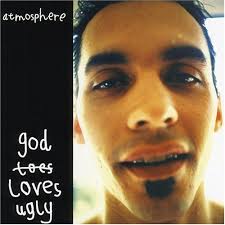 Haters beware. Slug and his beloved collective Atmosphere are back with their latest installment of b-boy love narratives. If at this point, you arenâ€™t convinced that Slug is one of the greatest emcees this generation has ever seen, then this album wonâ€™t convince you. However, if you do recognize the indelible imprint that Slug will surely leave when he eventually stops emceeing, then God Loves Ugly will not disappoint. Once again, Ant handles all the production with class, and molds a diverse soundscape for Slug to display his expertise with.

GLU begins with “Onemosphere,” and from the first two lines, we are introduced to the newer, cockier Slug: “Atmosphere, and maybe you donâ€™t like us/But of all the stars in the sky, believe weâ€™re one of the brightest.” And believe you shall. Consistently, rhetorical punchlines and engaging bravado keep the sonic value exciting until we reach the albums first gem, the emotionally charged “F*@k You Lucy.” A recurring theme for Slug seems to be this enigmatic figure known as Lucy Ford. Here, Slug tells the melancholy tale of his own childhood ordeals and how his insecurities destroyed his relationship with her. This is just one of the many songs that exemplifies the sheer brilliance Slug possesses.

The title track features a darker beat, picking up where “Fuck You Lucy” left off, and seemingly sets the mood for tracks like “A Song About A Friend,” “Saves the Day,” and “Lovelife.” For better or for worse, it seems that Slug is moving himself further and further away from the conventional b-boy styles of Overcast, and into a morose milieu filled with lyrics of depression. Itâ€™s not that these songs arenâ€™t interesting and dope in their own right, they just seem to lack the drive and intensity of the albumâ€™s standard-setter. But thatâ€™s not to say there isnâ€™t a diverse assortment of music to indulge in, thereâ€™s more to God Loves Ugly than despondency, thatâ€™s for sure.

“Blamegame” is a reggae-tinged composition that is unlike any rap song youâ€™ve heard this year. The beat immediately gives you the urge to get your head nod on while simultaneously skanking around the room. Not to be outdone by the masterful melody, Slug flawlessly meshes his singsong flow into it to weaving a beautiful piece of musical tapestry. Another unique concoction is “Shrapnel,” with its tribal-esque drum patterns and samples, itâ€™s definitely another song youâ€™ll have on repeat. If youâ€™re still looking for variances in Slugâ€™s flow, check “Flesh,” “Vampire,” and “A Girl Named Hope,” all of which should put to rest any doubts about Slugâ€™s versatility.

“Modern Mans Hustle” is another gem, perhaps Atmospheres most accessible song to date. Over a radio friendly melody, an encounter with the devil, the complexities of a little girlâ€™s thoughts as well as a promiscuous femaleâ€™s are depicted with a clarity that is exclusive to Slug. This song is further evidence that Slug is in the upper echelon of rappers, striving to bridge the gap between commercial radio and abstract thought: “Little sister needs conclusions/somehow she’ll discover them through the pop music.” Recited so eloquently, itâ€™s hard to stop and dissect what is a profound observation about pop culture this is. All in a days work for Sluggo.

In a parallel universe, Slug is on TRL at this very moment introducing his new hit single, and fans are cheering. He is the cornerstone of an industry that is producing an abundant amount of pseudo-thugs and superficial underachievers. In this world, he is one of the most eclectic rappers ever, a well respected underground icon, in an industry that is producing an abundant amount ofâ€¦well, you know. God Loves Ugly is quite an accomplishment, a career album for most of his peers, and the only disappointing part about it is that we know he has done better. Nonetheless, this is easily one of the top 5 albums released this year, and is just another testament to the ongoing legacy of Atmosphere.