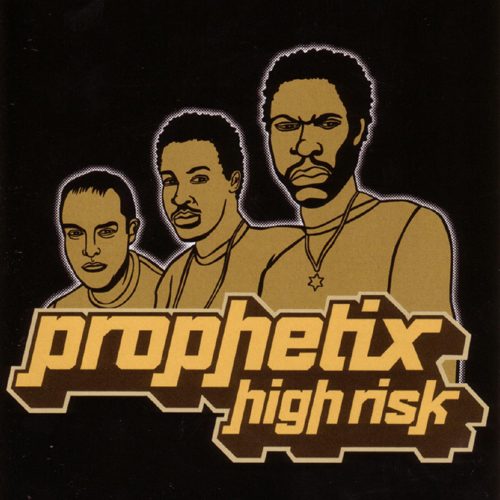 Prophetix is the name of a southern three-man crew that conspiciously strays from the pack of Gulf Coast rap acts. Residing in Atlanta, rappers Eddie Meeks and Mello Melanin and producer/DJ Jon Doe not only already have a few shorter releases under their belts, but had one of their songs, “Prophetionals”, chosen to appear on MP3.com’s “The Best of MP3.com” compilation. Considering the amount of rap songs featured on MP3.com, that is quite an achievement. Additionally, Jon Doe was able to place a remix on the Beastie Boys Anthology DVD (“Looking Down the Barrel of a Gun”), while the MC’s have been everywhere from the Apollo in Harlem to Europe and Asia. Joining forces in 1995 at Southern Tech in Marietta, GA, Meeks and Mello are definitely not new to this game. Nor is Jon Doe, who was a college radio DJ at Western Kentucky University before he joined Prophetix in 2000.

Actually, hooking up with such a talented producer may have been exactly what the Prophetix needed in terms of further advancing in this game. Too many hopefulls get stopped short in their tracks by sub-par production. Something that seems to be in store for the Prophetix on this very album. For the opening “Who Is This?” producer James Scienide serves them with a beat that is definitely too trivial to be up to the difficult task of opening a longplayer. As a result, Prophetix initially seem not exactly people you would want to hear a rap album by.

But look no further than “Bigguns”, as Jon Doe gets behind the boards and conjures up a groove that goes from a funky swing to a dramatic secret agent theme. Instantly, the MC’s sound better, even if they don’t quite manage to redeem from the first impression, not with simple similes like “I’m so hard I put a cut on a diamond.” But with these guys, any quote is likely to be taken out of context because most of their statements build on something they said prior. Like all good rap duos, Meeks and Mello build off each other. They’re not yet where classic duos like EPMD, Run-DMC or OutKast were/are in terms of attracting opposites, but they do compliment each other rather well in vocal range. Meeks with his Bun B-like baritone covers the lows, Mello the highs. Another thing that works for them is their energy and enthusiasm. They’re not angry rappers, not flamboyant rappers, just two guys on the mic trading verses, painting colorful, sometimes surreal, sometimes crystal-clear mental pictures.

However, most listeners will probably focus on the beats, because that’s where it’s happening. One particularly fine example is “True Urban Grit (T.U.G.)”. The track itself is delicate like only few are, but it still packs a whole lot of bump, mainly thanks to a fly-ass flute and an agile bass interacting with each other. The rappers deliver some more free-flowing, hard-to-follow rhymes, but show enough expertise to make a dope rap song out of a dope instrumental.

Going seamlessly from self-aggrandizing to touching on social issues, Prophetix garner more and more props as the album moves on. Proving they can write songs as well, Mello hits you with “Gravitatin'”, a proverbially mellow tune dedicated to the finer things in life AKA women:

“My mama said I was a good catch for women
my brains and good looks would be a good latch for women
I said, ‘Mama, everybody can’t creep in the linen
and even beautiful women carry venom’
I see ’em gravitatin’, peepin’ out the corner of they eye
walkin’ slow just to make sure I see the thigh
Caught another glance, I see you checkin’ out my shoes
just to see if I’m walkin’ or ridin’ – I paid dues
[…]
See me walkin’ in peace, standin’ alone
holdin’ my own, they wanna sit by the God throne
But that spot is on lock for the right partner
Use those tools, the Earth architect gardner
plant rhymes while you reapin’ the beats
harvest season is under my sheets
you little freak”

“I make your mind come first, then I make your body shake,” says Mello of his effect on the opposite sex. As a rap crew, though, they realize that the listener’s body has to respond before the mind does. And so they continually hit us with quality beats. For “Quitters” producer Zo laces a cool, creamy something of a track with a great MC Lyte vocal sample, before Meeks sets out to set himself apart from quitters and bullshitters by pushing rhymes like weights and flexing some of his lyrical muscle:

“Niggas is silly for dissin’ my soliloquy
how could you front on my vernacular ability
I’m rockin’ mics with that godlike agility
[…]
I’m droppin’ knowledge like Moses, totin’ too many tablets
take two and add on in the morning”

Further expanding their lungs as well as their lyrical landscape, Prophetix put their common history in a suspenseful, crime-tinged story (“Crispus Attucks”). By the time you get to “Prophetionals” you’ll be convinced that you’re indeed dealing with professionals here. From that point on, Prophetix look to solidify their win. They do so with the Untamed-produced “Shatter” featuring Lil’ Scienz and ID4Windz of Scienz of Life, Stacey Epps, U-George from The Hemisphere and a female voice who urges you to “fall in love with hip-hop once again.” “Grudge Match” is another dark, jazzy track courtesy of Untamed playing host to a line-up that includes Grizz, James Scienide and Untamed himself, wrapping things up in a chorus that plays on classic Rakim coolness: “We hold the microphone like it’s a grudge / Doe’ll hold the needle so the record won’t budge / we go back and forth, even forth and back / so holler back whenever you want a grudge match.”

Because their message stays consistent, Prophetix can afford to flow over all types of beats, covering the whole historical funk spectrum, from the glam of MF Doom’s “Sumpthin’s Gotta Give” to the Donald Byrd/Roy Ayers-vibe of Asprin’s “Unstoppable”. Towards the end of the album, a bunch of guest producers (AppleJac, Cheapshot, J-Nastee) crowd the studio, but it’s the Prophetix’ own Jon Doe who once again steals the show with a hypnotic head-nodder called “It’s a Shame”.

Prophetix really got all bases covered with “High Risk”, earning their “Impressive Presentionals” tag with quality music. Even though they warn competition of the “High Risk” that lies in battling them, it’s really the Prophetix who take a chance here. Putting in that much at the risk of not getting much out of it, nowadays when “all the urban music sold today is labelled hip-hop” (as Meeks puts it in “Shatter”), takes a lot of guts. Now all they have to do is find listeners who dare to take risks as well.