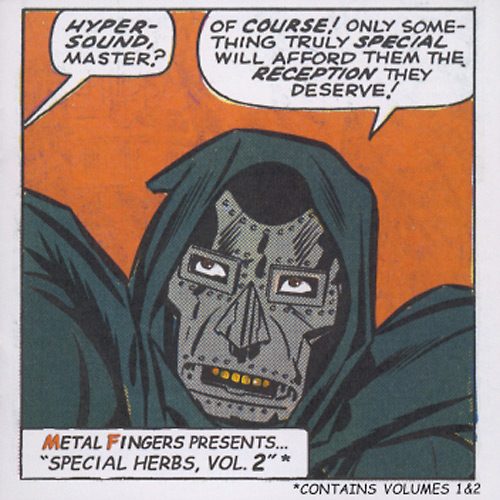 Perhaps best known until now for releasing “T.H.C.,” a hip-hop compilation by and for rap artists who are obviously down with the sticky green, High Times Records is expanding their scope and fanbase by releasing new and more esoteric albums aimed strictly at rap’s underground core. As luck would have it, MF Doom was looking for a label to help release his brand new album “Metal Fingers Presents: Special Herbs, Vols. 1 & 2.” Is it a marriage made in chronic heaven?

That depends on how you like to get lifted. For some people, the buzz of a great lyricist flowing is so strong that even a contact high leaves them staggering punch drunk. For others, a sonically crafted smokeout by the likes of DJ Premier, Just Blaze, or Rick Rock makes even a hazy red eye weap tears of joy. Truthfully rap’s most potent herb is a marriage of the two, but that doesn’t mean they can’t be appreciated seperately in all their hydroponic bliss. And since most of us were already familiar with MF as Metal Face the rapper, it’s time we got to know his other half Metal Fingers the producer just as well.

“Special Herbs” is a journey into the mind of that darkly tortured and captivatingly brilliant soul. The tracks themselves often seem ripped from the mind of a psychotic – some completely coherent, some incomplete thoughts that end abruptly with no warning, and some that make absolutely no sense other than to their creator. At their most sane, the coherent moments of MF’s ministry of music are sweetly sublime sojourns to sooth your soul, such as the starter “Saffron.” If you recognize the smooth sounds of “South Bronx” scratching by Scott LaRock, it’s no surprise. MF Doom melds old flavors with majestically flowing synth in pure harmony.

This album is also something of a compilation though, if one is to judge by the credits found within. That means at least in part, DJ Pocket is responsible for the strong herbs of “Femugreek”; a beat that speaks to the heart and soul of every Wu-Tang Clan fan. If you didn’t know better, you would suspect that trademark “killer bee buzz” in the background was one of RZA’s finest – but you’ll be too busy vibing off the drums and piano breaks to debate it for long. It also seems that DJ Spinna was responsible for “Coriander,” and like the herb it’s named for it has a light, lemony flavor that carries along like a freestyle jazz session truncated to one short exquisite loop. You may also recognize a familiar sound to a non-herbal remedy contained herein by none other than Bobbito the Barber, a.k.a DJ Cucumber Slice on “Monosodium Glutamate”; as well as something totally new on his bold “Red # 40.”

For better or worse though some of the tracks, including the ones that are clearly MF’s own, seem to drag on and on. “Mullein” starts out as a great marriage of eerie strings, booming drums, and spooky audio effects; but the initial buzz is worn out by sheer repetitiveness and not improved by some amateurish scratching. “All Spice” is as overly comprehensive as it’s name, trying to mix airy piano jamming with beatboxing and even occasional beat juggling without any of them really sounding coherent together. The guest contributors bail out “Volume Two” of this CD when it starts to wear thin, particularly Big Jim with his exquisitely potent “Eucalyptus” mix.

On the whole, this bag of herb is bound to leave some feeling high as a kite, and others like they just got a pound of sticks and stems. At exactly an hour long, this could be a nice retreat into a land of audio bliss where you can meditate or even imagine what rappers would sound great flowing to the tunes. At times, it could also be a bad buzz that drags on endlessly leaving you to wonder just how long an hour really is, as you count each second. While the conceptual nature of the presentation of each track as an plant or an additive to food is appreciated, conceptual presentations alone don’t make a whole album. Metal Fingers picks both winners and losers here, and perhaps if he had weeded out some of the latter more carefully the potency of the special herbs could have been fully realized.