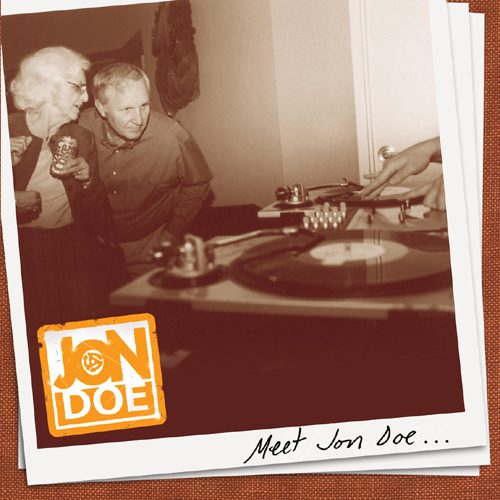 Frank Capra’s astonishing “Meet John Doe” (1941) is a message-laden and socially conscious populist melodramatic tale about the common man. The “sentimental, hard-hitting film is often grouped into a populist trilogy of Capra films about American individualism.” “Meet Jon Doe” is also the title of the self-produced compilation by DJ/Producer Jon Doe of Prophetix fame. The socially conscious film was Capra’s first independent film production, and this compendium is Jon Doe’s maiden voyage into the land of producer projects. Now, what makes a great producer LP? Those in the know may say an astute assemblage of beats, combined with the fluid mixture of MCs who can do justice to the music. New tracks from MF Doom, C Rayz Walz, 7L & Esoteric, J. Sands, Declaime, Medaphoar, Prophetix, MF Grimm, Binkis, Scienz of Life, Rubix, Supastition, Lost-N-Found Dept. and Count Bass D make up this LP.

The introduction contains some vocal excerpts from the Capra film, in an attempt to characterize what producer J. Dizzle is capable of. As far as album intros go, this one sets the tone for something special and whets the â€˜good hip-hop’ appetite. ATL’s underground trio Prophetix kicks off this album with “Gotcha,” and manages to excite the listener into expecting a solid all-round performance from this group of all stars. Totaling 18 tracks, “Meet Jon Doe…” has its standout cuts executed by the likes of Medaphoar, J.Sands and Prophetix. The LP’s first cut has a thick bass groove laced with a harmonica shrieking in the background. Eddie Meeks “hits the mic like a base pipe” and breathes fire to “exhale the dopest shit.” Expectedly, this cut outshines â€˜em all simply because Jon Doe was born to create music for Mello and Meeks. On “Let ‘Em Know,” Medaphoar spits some lyrical hotness over the fast-paced guitar/piano melody. His semi-rapid flow is further complemented well by Jon Doe’s production. MF Doom’s “The Mic Sounds Nice” keeps the quality level relatively the same, and Doom doesn’t disappoint lyrically. J. Sands takes center stage after 7L & Esoteric’s sub-par-sounding “Title Track,” with his version of “Strong Black Rebel Rap.” J. Sands gets political:

“If your record’s dirty, you can’t hold firearms
and blacks get arrested more than white folks on the norm
so now you got a whole country of white folks sittin’ comfy
waitin for some nigga to try something and pump three
straight to the chest, and the jake do the rest
write it off as a self-defence case to the press
Since the rifle was licensed there won’t be no indictments
The way they put it in our face is more triflin than triflin
We have no rights as human, cause you know how they do man
Show you the American dream but won’t let you in
Lock us in the gutters of society with no variety
You just broke smoke dope and don’t vote
That’s why our seeds want hope for better days to float
It’s all about the day-to-day for federal notes
It’s an incredible joke, the United States of America’s
criminal justice system is inferior”

Things then simmer down after the first interlude, with the throwaway song “Anonymous.” Count Bass D manages to elicit a chuckle and smile with “Exit 273” and “Number 3 Pouncyil.” Jon Doe backs him up well with two decent beats that should have been extended to full tracks; instead of the minute long ditties. Lost-N-Found Dept. also clock in on the latter half of this LP with another track that should be recycled. It’s as if Jon Doe loses focus and concentration on the lesser-known MCs, and turns his full attention to his compadres. A great producer constructs a beat in a manner that the listener KNOWS that this beat could not have been made for any other. When Primo constructed the piano-laden music for Biggie to grace on “Unbelievable,” it was indubitable that no one else could have done justice to it; save for Christopher Wallace. That’s what makes a great producer; the ability to capture a lyricist’s nuances and subtleties in the music, such that when said rapper rhymes, we KNOW that the beat belongs to him/her. Jon Doe manages to do this on a few tracks, but lets his mind slip when dealing with the other artists. Such examples are “Ain’t Ya’ll” and “Brave at the Heart.”

All is not lost though as Scienz of Life represent on the latino-influenced “Hot Night” and Declaime closes things out with the lackadaisical “Death Becomes You.” Upon reflection of this LP, one recalls Eddie Meeks’ opening verse where he offers, “if your flows don’t fit, then you must acquit.” What then if the beats don’t fit? I suggest heading back to the drawing board. On a certain level, the LP disappoints because this is meant to be a showcase of the beatsmith’s talents; which at times are sub-standard and off-putting. Capra’s film was “generally considered the weakest of the three” when lumped together with “Mr. Deeds Goes to Town” (1936) and “Mr. Smith Goes to Washington” (1939). Lumped together with his other musical ventures, one may say that Jon Doe’s production LP is not one of his best efforts.