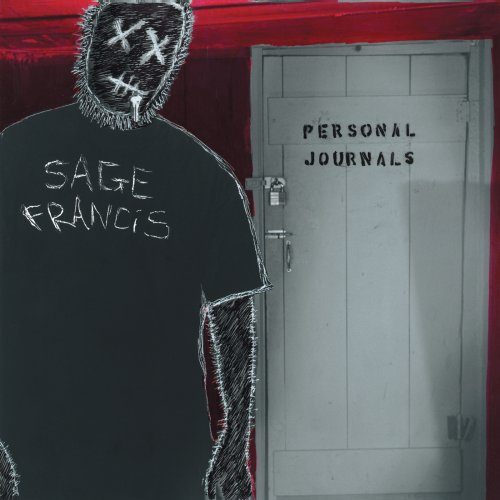 Many rappers today speak about “keeping it real.” The recipe for commercial success usually relies heavily on the ingredients of a thug-like persona, pimp status, and pretty boy appeal. Exploiting rap stereotypes has always been a surefire way to gain some type of recognition in the world of hip hop. Ironically, in this world of “keeping it real,” honesty is hardly associated with the qualities of this brand of “realness.” Rarely will you find an artisan willing to wear their pride on their sleeves and deliver a heartfelt opus, with genuine intelligence backing their every word. Those who have been waiting for an album like this need not wait any longer. The artisan is Sage Francis; the opus is Personal Journals.

Mr. Francis’s album is nothing short of extraordinary. Sage combines his spoken word experience, with his offbeat humor, and his recondite rhetoric, not only balancing each attribute, but having them rely on each other to formulate his distinctive sound. His poetic acumen is paralleled only by the splendor of the instrumentals, which accompany almost every syllable. Anticon’s beatmakers Sixtoo, Odd Nosdam, Jel, and Controller 7, Alias, and Mayonnaise as well as Sage’s longtime friend Joe Beats, all show up on this album, giving Sage a multifaceted canvas to work with.

On “Different,” Sage establishes a premise for the entire album. One, he’s as different as afro-mullets, and two, he’s going to make sure we know his name by the end of the album. Well, he is definitely different from a lot of rappers (he has actual talent, and a love for music), so that part is true. And anyone who’s a fan of hip hop and doesn’t know who Sage is, had better pick up their late pass now or miss out on one of the greatest talents in hip hop.

The bass-driven “Climb Trees” will definitely have headphones resonating across the country, while his tale of a captured fairy “Broken Wings,” will have heads digging for underlying meanings for ages:

His affection for his sister is apparent on “Inherited Scars,” a bona fide masterpiece in illustrating an undying love. He portrays a loving brother attempting in futility to be a father-figure for his sister, while questioning his own purpose and effectiveness in that position. He asks himself, “Is it my place, to put a smile on your face?” Similarly, “Black Sweatshirt” has Sage reminiscing on his childhood days, and the comfort provided by his sweatshirt that he found abandoned, and wore “like an extra layer of old skin.”

But the largest portions of emotion pour through on “Eviction Notice,” “Pitchers of Silence,” and “Specialist,” which can be interpreted as a collective story of a bad break up. Odd Nosdam, Sixtoo, and Controller 7, respectively, set the perfect moods for Sage’s love-stricken tirade. His vehement verses tear into an anonymous female and ameliorate every standard for making passionate music.

Sage’s rock band AOI also appear for a track, a live version of the deviously catchy “My Name Is Strange,” a remake of the Bob Seger classic “Turn The Page.” Sage exhibits why he is one of the premier vocalists in hip hop today. Though he is not blessed with an angelic voice by any stretch of imagination, his gruff harmonies and facetious writing style make this rock composition feel more like the final piece of the puzzle rather than the odd track out.

Culminating this album is the lone collaboration with fellow Non-Prophet Joe Beats. Aside from leaving you yearning for their debut full length, “Runaways” and its beautiful piano chords will have you drifting into rhetorical wonderland. The lyrics are classic Sage:

“With reckless abandon, their standing, refusing to go down
Pinballs and their machines bounce between abusive homes now
If it’s fight or fly, they’ll just choose to throw down
Ain’t nothing like beating a dead horse, riding it through a ghost town
I move with no sound, used to think I was invisible
Till they stopped me mid stride and said ‘I think I seen a picture of you…’
Picture that, I said “Nah, I just got one of those faces
Placed next to an expiration date that changes”

Saying that Personal Journals is an enjoyable listen would be like saying Rakim is a GOOD rapper. Some of us already knew that Sage had talent, the “Sick of Waiting” collection proved that. But we wanted to see if he could construct an album that would capture the intensity of every artistic virtue that he possesses. After listening to this album, they’ll be no doubts left in your mind, other than the doubt that any emcee will ever be as eloquent as Sage is on this album. He’s created a modern day classic and most of the hip hop world have never even heard of him! Who is this guy? Pick up “Personal Journals,” find out, and experience one of the best hip-hop albums of the year.