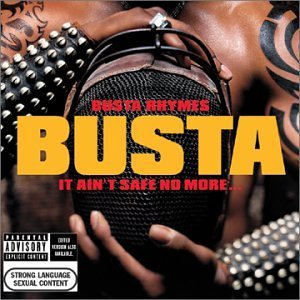 In an era when hip hop is clogged with phony thugs wearing throwback jerseys, pinwheel hats doing their best Jay-Z rendition, thank God we have MCs like Busta Rhymes to come through and break the monotony. Ever since he exploded on the scene with the smash hit “Woo Hah” in 1996, Busta Rhymes has taken the industry by storm, dropping a platinum album every year since (minus 1999) and hitting us with some of the biggest (and best) hip hop hits of recent memory in that time span, and he’s always done it his own way. Year after year, Busta blesses his loyal fanbase with a new flavor; none of his albums sound exactly like the one before it, but at the same time he does not stray so far from his roots as to alienate his fanbase. With It Ain’t Safe No More, Busta continues this trend; he’s still Busta Bus, but with yet another new twist.

One of the noticeable differences from last year’s Genesis is that this album is more conceptual. While the majority of the last album was spent with Busta depending on banging beats and his flows to captivate the listener while not relying much on lyricism or “relevant” subject matter, he takes a slightly more serious approach on this one. Busta is still more Flava Flav than Chuck D, and spends the majority of the album proving this, but there are at least 3 entire tracks that could qualify as “conscious”, while there weren’t really any cuts like that on Genesis.

The first song on the album is the title track, Dilla (the artist formerly known as Jay Dee… not to be confused with Jermaine Dupri) provides the sick, sonic sounds of the beat and Busta proclaims that he’s taking the game back. Fairly typical subject matter for an opening track on the modern rap album I know, but the beat is insane and Busta tears it down, so how can anyone really complain?

On the DJ Scratch produced “Branded”, Busta drops some lyrics about the state of the world, basically. Topics ranging from the struggles in the streets to the weakenening state of hip hop, Busta tears it down: “Rap niggas beefin, their album probably needed the press / And as a man, I never found the slightest need to impress / Another man, because I’m proud and I believe that I’m blessed / But yo I always found a need to address / These weaker niggas and speak to the streets, keeping the people abreast”.

Of course, it wouldn’t be a Busta Rhymes album without some uptempo party starters to wild out to. Enter the Neptunes produced burner “Call The Ambulance”, a song that will be a surefire hit if it is released as a single. Nobody is more skilled in making joints like this than Busta, who warns on the hook that when this song hits the club, you’d better “Call an ambulance to come and pick up your people”.

Busta proves he can make a more subdued style of club joint as well on joints like “We Gonna Do It To Ya” and the lead single “Make It Clap”, which I’m sure everyone has already heard by now. Songs dedicated to sexual adventures like “Taste It” and “Hey Ladies” are balanced by grimy joints like “What Up”, “Turn Me Up Some”, “Riot”, and “Hop”.

One of the best things about this album is that it there is only one small dip. There is no song that is out and out wack, in fact the vast majority album is dope, but the two songs that I see myself skipping (“Hey Ladies” and “I Know What You Want”) are back to back; other than that, the album is basically a straight through listen. For an album with 18 songs, this is quite impressive. And it certainly closes with a bang.

The last official song, “Till It’s Gone” is produced by Wu-Tang affiliate Tru Master, who hits Busta with a beat that sounds straight off Ghostface Killahs’s “Supreme Clientele” (this is a good thing, by the way). The vocal sample is very nicely used, and is probably the deepest joint on the album, with Busta making observations about life and how we too often take things for granted. Following this up is the “Make It Clap Remix”, a bonus cut that is a dancehall remake of the original. The beat remains the same, but Busta and Sean Paul trade reggae style verses and as “same beat” remixes go, this is a worthy addition to the album.

Bottom line, the album is vintage Busta. Once again, he has switched up his style slightly enough so that this does not sound like any of his other albums, yet simultaneously stayed true to himself. The same people who sent his other albums platinums will do the same with this one; Busta is who he is, and fans of Busta Rhymes will enjoy this album. You don’t buy a Busta Rhymes album for incredible lyricism or to hear him dropping knowledge; you buy a Busta Rhymes album for banging beats, sick flows, and a change of pace from a mainstream scene that is often dull and formulaic. When Busta does hit us with some sick lyrics and knowledge, it’s icing on the cake. But first and foremost, Busta Rhymes is still about staying true to one of the forgotten values of hip hop: having a good time. Busta, more than anything, goes into the studio and makes music to put a smile on peoples face and make them bop their head. Once again, he has succeeded in this.