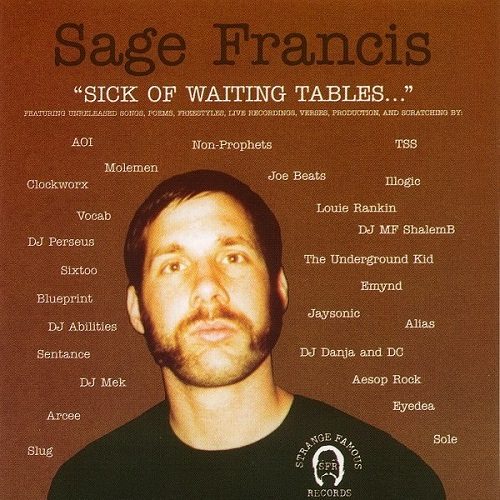 Who’s Sage Francis? And why is he sick of waiting tables? Don’t know about the second question, but I can tell you that Sage Francis is straight out of Rhode Island, was the winner of the 2000 Scribble Jam Freestyle Battle, and is quite busy with a variety of projects, including his career as a spoken-word poet. He’s currently affilliated with Anticon and has plans to release a full-length album on Sole’s label. It’s hard to believe he’s sick of waiting tables – he sounds way too busy to work.

But until he drops his debut album, fans of Sage, or those who are just curious, can peep this CD, a motley assortment of radio freestyles and battles, live tracks, and a few studio cuts. Sage himself makes it very clear on the back cover that this is NOT an offical album, so let the buyer beware. While the studio cuts sound nice, the radio and live songs vary in quality from lame to not-so-good; this might not be a CD you’ll want to bang in your ride with the windows down – folks will think you have a shitty system.

But as an introduction to Sage Francis, this is a great place to start, as it exhibits one of Sage’s greatest strengths as an MC: his diversity. What kind of MC is he? It’s hard to say. Yea, he can be a punchline-spitting battle-rhymer, but he can also be introspective and kick an emotional jam. He can be political and dead-serious on one track, and then he’ll come across as the class clown on the next. Lazy listeners may be threatened by his multifarious nature, but for those that appreciate variety, Mr. Francis is the man.

Turning to the CD itself, what do we got? The first thing a listener may notice is Sage’s sense of humor, which permeates just about every track here. He’s a funny guy, and it comes through when he rhymes. But he doesn’t take himself too seriously, and his humor is more playful and innocent than, say, Eminem’s. Perhaps the best track is “Rewrite”, an emotional song about a past relationship that could be an anthem for just about any guy that has ever been dumped. Fortunately, “Rewrite” is taken from studio tapes, so the quality is quite good. Another winner is the “Orphanage Freestyle,” in which he demonstrates his superlative freestyle skills along with some of the brightest up-and-comers in the underground: Aesop Rock, Eyedea, Illogic, Blueprint, and Slug.

One track deserving special mention is a radio show battle with The Underground Kid. The Underground Kid, in case you haven’t heard of him, is the worst rapper EVER. With a corny voice and zero flow, he slings back-to-back-to-back cliches which I’m guessing are designed to leave his opponent on the ground laughing and secure victory by default. I just about fell out of my chair as I heard this fool rhyming, and then it really took off when Sage began to finish the kid’s rhymes before he did. Hands down, one of the funniest hip-hop tracks I’ve heard.

On the down side, I’ve heard some disparaging remarks about Sage’s voice, and maybe they do have a point. He doesn’t have the smoothest vocals you’ve ever heard, but so what? If I want a nice voice, I’ll listen to Marvin Gaye. Whatever shortcomings there are in his vocal quality, he still has a lot to offer lyrically and is worth checking out at least once. If you’ve never heard Sage Francis, this CD is a good place to start. It’s just an appetizer, really, providing bits and pieces of his work in all its diversity, leaving the listener wanting more. As the back cover says, this collection “is meant to promote the upcoming material of the artists involved,” and it more than succeeds at this modest goal. If you can find this self-released CD, it’s worth a buy.