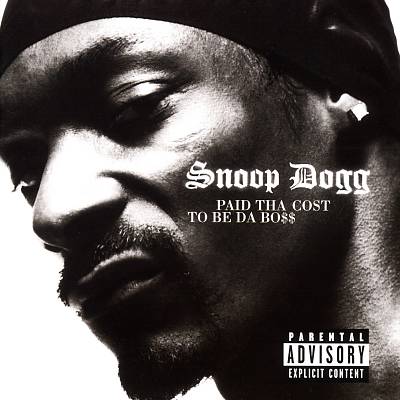 There’s no question, Snoop is the boss. It’s hard to imagine any hip-hop artist that’s six studio albums deep with millions upon millions of records and an worldwide fanbase NOT being a boss. And if anybody has paid the cost to get there, Snoop Dogg did. He and Dr. Dre helped turn Death Row into a powerhouse of gangsta rap. When their ship started to sink, Snoop had to escape Suge Knight’s heavy hand, and ended up inking with No Limit Records to make his move. His star never stopped rising, but Snoop had to work twice as hard to convince his doubters it wasn’t a bad move for his career. Along the way, he reunited with Dre, helped push Dre’s “2001” sequel to “The Chronic” to the top of the charts, and did guest raps with everybody from Jay-Z to the Wu-Tang Clan. Through all the turmoil of his career (including beating a murder charge) Snoop has still managed to come out on top whatever happens.

“Take two and pass it, it will not burn you
From the Long Beach Chronicles to the Wall Street Journal
They all know the G with the Cutlass Coupe
Ask Bill Gates (yeah I know the homie Snoop)
Yeah I’m straight loc’n, hangin wit my folk and
Follow Rakim cause “I Ain’t No Joke” and
Cuz, I done seen so much (like what?)
Enough to have your feelings touched
When the gunshots ratta, all ya boys scatter
Check up on ya homies but they gave ya bad data
Make a nigga stop BREATHIN, that is so relievin, and now you niggaz believe in
What I say cuz what I say is so real
Homie you don’t wanna see the steel
You dont wanna catch a body, you came here to party!
Now that’s what you should do, now where’s my baby boo?”

The Neptunes beat on this track will undoubtedly be another hit for Snoop, but there’s plenty more good material to go around. Pharrell and company also do the bouncy “Beautiful,” and the false falsetto Williams spits is another Jay-Z “I Just Wanna Love U” type winner. Speaking of which, he cameos on the Just Blaze produced song “Lollipop,” which also features Nate Dogg and Soopafly. DJ Premier drops in for a couple of banging East coast style cuts: “The One and Only” and the humerous “Batman & Robin” featuring RBX and Lady of Rage:

“We can take it to The Bassment, live with Tigger
Go get The Riddler; then watch me play that nigga like a fiddler
On a hot tin roof, I got them watchin who?
She who spits it like she was sippin rot-ten brew, ooh
(We Marvel at you Comics, you ain’t no Superhero)
You just a stupid zero, you ain’t hard like DeNiro”

The only shame is that this is Robin’s only appearance on the album; Lady of Rage’s new album isLONG OVERDUE. Regardless there’s other noteworthy material. Fredwreck combines with Snoop to update Eric B. & Rakim’s “Paid in Full” on the song “Paper’d Up,” which once again proves why Snoop is the ONLY rap artist who should be doing covers of hip-hop classics. He also laces the pimptastic smooth “Bo$$ Playa” and the all-star “From Long Beach 2 Brick City,” which not suprisingly features hip-hop’s favorite blunted supervillain Reggie Noble:

“I’ma ride to the death of Def Squad on my chest
Look at it, crook at it, rob you and jet
Surprise you and Flex, Funk in a Caddillac trunk
With a chicken, bobbin her neck
You done woke up an ape tryin to sleep
You done found the Hugh Hefner to find the freaks!
I’ma growl with beats, I’ma stay on the street
I’ma stay sayin ‘Fuck you’ behind police”

Snoop doesn’t usually have a shortage of big guest stars on his albums, and this one is no exception: everybody from The Dramatics to Ludacris can be found in the mix. The proof in his pudding though is that no matter how many stars are in it to win it, Snoop never stops shining the brightest. His laid back drawl still takes Mississippi to California by way of Long Beach, with a flow that has even international pimps like Bishop Magic Don Juan in awe. By the time you reach the G-funked out finale “Pimp Slapp’d,” you have no doubt that Snoop’s not afraid to floss in the face of his critics and haters:

“Now just because I sip Moet, they say that I’m hopeless
But I don’t give a fuck, so blame it on the loc’ness
Now this is how we do it when we checkin the grip
Snoop Dogg is in this bitch, so don’t even trip
I bust a funky composition that’s as smooth as a prism
So check it while I kick off in this funky-ass rhythm”

Snoop isn’t just displaying his verbal dexterity for the hell of it though, he’s taking on his original label and their legendary CEO; undoubtedly in direct response to their releasing the half-assed Snoop album “Dead Man Walkin” around the same time as “The Last Meal”:

“It’s so real, I had to show some love
Now back to this scrub, it ain’t about Crip or Blood
It’s about you bein jealous of what I does
Cause I does it the most, the king of the coast
in the paint playin post – I back you down
like Shaq-Daddy, and bust on ya out the new Caddy
And skirt up, bust ya boulevard
I’m not Xzibit, you can’t +Pull My Hoe Card+
.. I fucked all your groupies
When you was doin time in Camp Snoopy
With the fags and snitches, no killers just bitches
And you was payin niggaz off with all my riches
You so hardco’, why you ain’t go to level fo’?
Oh I know (bitch!)
But I walk the mainline everytime I go down
You can check my G files I do it L.B.C. style
.. I got the word on your Simon
You need to just start rhymin
Cause you the biggest star on your label
And them other niggaz just crumbs off my table
You’re not able, to compete with the heat that I drop
And I still ain’t been paid, for “1-8-7 on a cop”
I started yo’ shit and I will end yo’ shit
if you keep talkin shit on Crip!
[…]
Suge Knight’s a bitch and that’s on my life!”

His detractors have not always given the D-O-double-G the credit he deserves as a tight lyricist, but like the last song’s title there’s no doubt it’ll hit you in the face if you’re not paying attention. Snoop doesn’t spend his whole album calling out enemies though, and why would a boss even need to? For the most part he’s laying back, kicking his mackadocious pimpalicious raps, and doin’ the damn thang like he always does. Snoop’s back, so roll up a fat one and take a ride with the Bo$$ – he paid tha cost, and now he’s letting you into his world for free. Well, almost free. You have to buy the CD first!