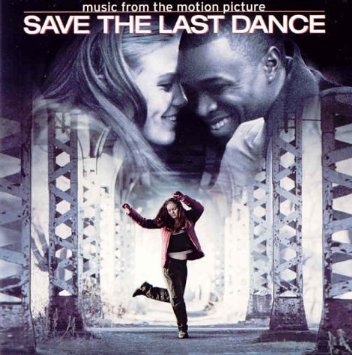 Various Artists :: Save the Last Dance

Being a former soundtrack junkie, I know what it takes for an album for a movie to be top notch. You have something like “Juice”. And then you have “House Party II”.

And then there’s “Save The Last Dance”. The premise of the movie is corny as hell, about a white girl (Julia Stiles) who meets a black guy (Sean Patrick Thomas), and also gets help from her black girlfriend (Terry Kinney). Oh oh, heads up and now we got Fredro Starr in the mix, there must be, what, racial conflict? Wow!

Alright, alright, this isn’t a movie review, but a CD review, so we begin with Fredro Starr’s “Theme From Save The Last Dance”. When I read this, knowing what the film was about, I thought maybe it would be kinda grimee. Instead, Fredro is on the relaxed side of things talking about the state of the world today and how we should respect each other. You can tell it’s Fredro, but it’s far from the Onyx style we’re used to. It will be interesting to see if he’ll use this as part of his overall style, or if this is the beginning of something new. I bought the CD because the TV ad said this song featured Jill Scott, but it credits vocals to Sunshine.

Also on the disc is the first track by Lucy Pearl to feature singer Joi (of “Sunshine & The Rain” fame). “You” features Snoop Dogg & Q-Tip, both of whom add nothing to a potentially lame song.

The rest of the album suffers the same fate, relying on a heavy mix of modern and recently modern R&B (K-Ci & JoJo’s “Crazy”, Pink’s “You Make Me Sick”, and Donell Jones’ “U Know What’s Up”. The inclusion of Chaka Demus & Pliers “Murder She Wrote” brings a possible vision of how this is used in the movie: Julia Stiles wants to show off her dancehall stylee, and proceeds to shake what her mama was able to give her.

The hip-hop is not represented well, the only decent track being Q-Tip’s “Breathe And Stop”. Athena Cage’s “All Or Nothing” is a nice soul song that works, but after suffering through 50 minutes of lameness, you almost want to give up. Then again, what do you expect from a movie created by MTV, who also did a movie based on a similar racial storyline, starring Monica? That’s right, this isn’t a movie review, but anything is better to talk about than this CD.