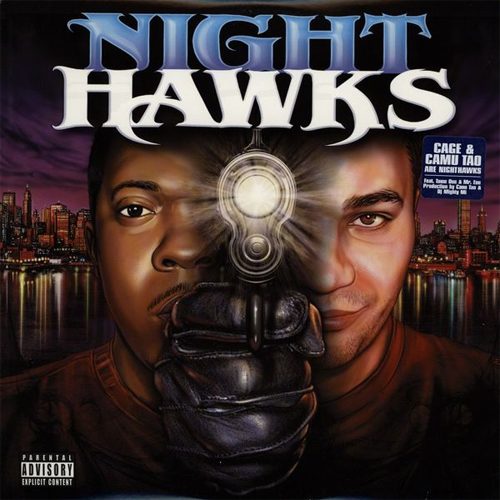 Cage’s “Movies for the Blind” was without a doubt one of the most intriguing rap albums to come out in 2002. Only a few months later it becomes clear that Cage is actually quite serious about the whole ‘movies for the blind’ thing. He already dabbled with Stanley Kubrick’s classic “Clockwork Orange” a little bit, but now he delves even deeper into the concept. He teams up with MegaHertz member Camu Tao to form the Nighthawks, detectives Deke DaSilva and Matthew Fox, two cops who have counterparts in film history. Go back as far as 1981 and you’ll find a Sylvester Stallone movie of the same name, starring Stallone (who by then already had the two first “Rocky” parts to his resume) as Deke DaSilva and Billy Dee Williams (probably best known as Lando Calrissian from “Star Wars”) as Matthew Fox. “Nighthawks” also marked the North American debut of Rutger Hauer, who portrays a German terrorist named Wulfgar.

For the past week, this reviewer has in vain looked for an opportunity to watch this film. The conclusion of this futile search should have been that it doesn’t matter what “Nighthawks” the movie is like, because “Nighthawks” the rap album has to stand on its own. Then again, there IS a connection and it’s definitely worth exploring. In any case, “Nighthawks” the movie is available on DVD, so people who really want to get into every aspect of this record should be able to check out both. The DVD also gives the shortest possible synopsis on its front cover where it says: ‘A terrorist holds New York in a grip of fear and only Stallone can take him on.’ Inevitably, the terms New York and terrorist in the same sentence evoke memories of 9/11, and it’s easy to imagine that Cage and Camu Tao did indeed choose this particular movie because it’s about two cops trying to prevent a terrorist attack.

So far, so good. Not to mention they did a remarkable job recreating the original movie poster for the album cover (with Camu’s Fox replacing Hauer’s Wulfgar). But as far as the actual fulfillment of the concept goes, that’s basically it. One thing is clear: Cage and Camu were definitely not out to re-enact “Nighthawks” in the recording studio. Bad guys do make a few guest apperances, such as Metro on “Car Chase” or Space as “Count Crackula”, but the real bad guys are clearly the Nighthawks themselves. The album is a never-ending spree of two corrupt cops engaging in evidence planting, excessive use of force, false reporting, witness intimidation, unbecoming conduct, perjury, withholding of evidence, taking bribes – whatever is of interest to Internal Affairs, the Nighthawks have probably done it. They don’t even bother to put on a good cop/bad cop act, these cops are BOTH bad to the bone, so bad in fact that they really don’t need a bad guy. Or so they think.

Of course, in the movie, DaSilva and Fox are not without fault either, that’s why their superior chose them to do the dirty work of taking the terrorist out. It’s a classic cop movie topic: Only bad guys can handle bad guys. The cop who has trouble adjusting to the rules is a common sight in Hollywood movies.

Okay, let’s contemplate this for a minute: The way things are looking, some obscure Stallone movie is about to get more attention in a rap review than the record itself. In case that’s the impression you get, it is wrong. Rather, this review uses the movie that acts as a model for a rap record as a gauge for what the record actually achieves. So let’s get on with it: In online reviews, “Nighthawks” the movie, unlike other, more popular Stallone flicks, does get some props. Not only does it apparently have funny moments such as Sly duking it out in drag, it seems to be a fairly decent piece of cinematography. Ziggy of ReelCriticism.com writes:

‘As for action, Nighthawks certainly delivers, with several exciting chase scenes and some genuinely tense moments. However (…) action does not take a back seat to story here; time is taken to be sure that whe the action does occur, it makes sense both in terms of the plots and in terms of what’s driving the characters behind the action. Quite unexpectedly, this turns out to be a rather smart flick. (…) The only weak point is the fact that some of the supporting characters, particularly DaSilva’s partner, Fox, are remarkably underdeveloped almost to the point of being doormats.’

One might suspect that alongside the ever-engaging Cage, Camu Tao as well has a hard time making his presence felt. That’s clearly not the case. Because for one, Cage isn’t his usual graphic and drastic self, and secondly, they basically talk in the same manner about the same things, with only minor differences. And that’s exactly the problem with “Nighthawks”. Ultimately, it’s just two dudes rhyming about what dirty cops they are. It doesn’t go any deeper. You don’t really get to know the characters. For all the activities they engage in, they remain static and lifeless, on a high-speed chase down a dead end street. For the sake of suspense, it might have been wiser to let one of them play the part of the terrorist. That’s one way the whole thing could have become more dynamic, as it would have forced Camu and Cage to think about some sort of plot instead of forced multi-syllabic rhymes. Like Pacino and De Niro in “Heat”, one opponent worthy of the other. At least, that’s how “Nighthawks” the movie seems to work:

‘Hauer does very well as Wulfgar, showing audiences for the first time the portrayal of cold and calculating intellect combined with polished gentlemanly charm that would become the hallmark of his villains. He easily holds the attention of the audience throughout the film, and is very much believable as a deadly terrorist, proving to be a very satisfying villain who doesn’t have to go over the top to be a presence on screen.’

In cop movies that abide by the rules of the genre, character clashing is mandatory. You either have two heroes who are forced to work together against their will (“48 Hours”), or two partners who tease each other like a married couple (“Lethal Weapon”), or you have two strong lead characters in the classic hero vs. villain set-up. Given their unison in being bad and the absence of a prolific villain, “Nighthakws” ultimately fails to build up enough tension to hold the listener’s attention.

It should be noted, however, that, far from being a cinematographic masterpiece, “Nighthawks” the movie seems to contain at least some of the bugs typical for the genre. Chris Holland & Scott Hamilton note on stomptokyo.com:

‘This movie also exhibits another time worn cliche of action movies with low ambition: The title that makes no sense. After watching this film, we’re still not sure who the Nighthawks were. Were they some shadowy secret organization who were manipulating everything, so secret that they never appeared or were mentioned in the movie? Was there some sort of ornithological subplot cut from the final edit? Maybe we’ll never know. We’ll just add it to the list of other mysterious action movie titles like Last Action Hero, Maximum Risk, and The Specialist. Maybe we just think too much during these kinds of films.’

And that’s what you shouldn’t do when listening to this album either. Forget about a plot. Forget about in-depth characterization. Forget about stunning performances. “Nighthawks” leaves just too much to be desired in that regard. From a hip-hop perspective however, considering everything from beats and rhymes to the actual content, “Nighthawks” the album is firmly planted in the hip-hop universe. Corrupt cops have been the main subject of countless rap songs and are regularly assigned the role of the bad guy. Obviously, rap music doesn’t think too high of law enforcement. As Mobb Deep once put it: “The projects is frontline / and the enemy is one-time.” Apart from the fact that they’re perceived as part of a racist system, the police often plays the part of the enemy in rap songs simply because the character is engaging in criminal conduct. By doing bad – as cops – with such enthusiasm, Camu and Cage take these two ends and tie them together. Their effort doesn’t reach the intensity or craftsmanship of the blueprint for all such projects, Kool G Rap & DJ Polo’s “Live and Let Die” album, but it’s nevertheless entertaining, despite various shortcomings on the ‘movies for the blind’ concept front.

In a business where it’s often only about ‘music for the seeing’ (think of the importance of looks and video clips), “Nighthawks” is proof that rap still can hold a suprise every now and then. Ironically, it’s the music that does the trick on this album. Producers Camu Tao and DJ Mighty Mi alternately provide tracks that turn out to be the perfect sonic background for the Nighthawks’ sinister plots and sarcastic quips:

“It’s a drug bust, hold up y’all, read him his rights
then stash dope, then grab dough, beat him with pipes
then grab hoes and mash out, feed ’em with white
then laugh when we turn in reports seepin’ with lies”

Never repetitive, venturing into some very dark corners, this is the stuff some of these thug rappers would kill for. Highlights include the dried out “Cop Hell”, the even-paced “Car Chase”, the mystic “Count Crackula”, the busily brooding “P.C. (Police Crime)”, the funky “Bomb Beach” (featuring Mr. Eon as Chief Dick Starbuck) as well as the cuts who seem to be influenced by the synthesizer sound of the original score (“N.R.A.”, “Keep the City Up”, “Nighthawks”, “Street Poly”).

In the end, it’s only thanks to the music that “Nighthawks” succeeds. Lyrically and conceptually, it is nowhere near the high standard set by Cage’s solo debut “Movies for the Blind” and clearly less entertaining than the Smut Peddlers album. 12 years after Ice Cube boasted, “You can’t believe, ‘Faces of Death’ on wax,” Cage and Camu Tao make a serious attempt at marrying hip-hop and movies, but fail to take it to another level.