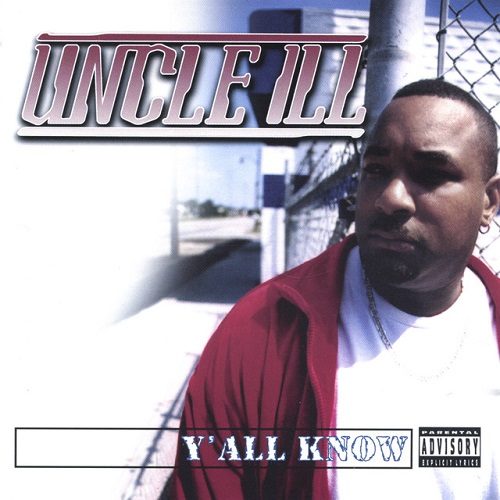 So close. With “Y’all Know,” Uncle Ill is so close to really getting it done that it’s frustrating. It’s a case of ifs and buts with this record, and it sounds like Ill is capable of something dope, but sadly he falls just short of the mark.

The album opens with a track called “Cho,” and creates a great first impression. Mad Chemist, the album’s producer, cooks up a beat that sounds like some b-boys are breakin outside an Italian pizzeria, with the strains of a squeeze-box combined with some heavy bass and drum loops. Uncle Ill sounds like he could come with a nice delivery, possessing a big voice that’s just a little gravelly. But it soon becomes apparent that “Cho” is just another ode to gettin the cash. It sounds like one of Busta’s tired old call-and-response “where my bitches at” tracks, but with about one-tenth the charisma. Disappointing, because the beat is definitely in tact, and suitable for pumping through car stereos. If only the rhymes were a bit more engaging. Here’s a sample of what Ill’s about:

“We roll on 20’s, no matter the cost. The fatter the cost, the more we gots to floss. For fortune and fame, Some still searchin in pain. My quest for success won’t die, scorchin in flames.”

Whatever. It’s no worse than what ninety percent of rappers spit daily. Certainly, Ill’s raps aren’t meant to get you thinking â€“ they’re inoffensive and passable for the most part. Once in a while though, Uncle Ill slips up and stretches a syllable too long, or tries to fit too many words in a paragraph. To many listeners, this probably won’t even be an issue, but it caught my attention more than a couple of times. I’m trying to say that, generally, Uncle Ill’s words got my attention for the wrong reasons, since most of what he says slides through one ear and out the other. I get the feeling Uncle Ill is limiting himself lyrically through the subject matter he’s rapping about. It’s strictly the usual suspects in the topic department though: money on “Cho”; fake thugs on, uh, “Fake Thugs”; creepin witcha girl on “My Celly.” The rest is composed of empty brags, and loud party anthems. That’s fine in and of itself. There are tons of artists out there who are potent when approaching shit like this. But what Uncle Ill has in confidence, he lacks in character. That is, he sounds like he’s not really meaning it when he raps, and comes out sounding uninteresting. He’s got an average flow, but the barely-adequate rhymes show their weaknesses only because of that fact. Let’s just say that if Ludacris was the MC on any one of these tracks, they could be Top 40 Hits. But Uncle Ill just ain’t Ludacris, I guess. Case in point: on the title track, Ill boasts, “Without Parker Brothers, I’m out for Monopoly.” Banal, been-there, done-that punchlines are the order of the day.

The only time Uncle Ill ever gets really, truly wack is on the choruses to some of the tracks. One offender is “My Celly,” in which Jasmine Williams wails some cornball-ass nonsense about “I’ve got caller I.D. so I can see it’s you.” If you’re gonna have a girl with a nice voice sing on the hook, give her something to sing, dammit! Even worse, though, is “Stress.” On this track, Mad Chemist sets up a nice symphonic melody â€“ real Phantom of the Opera shit â€“ and Uncle Ill ruins it with a dumb, childish track about how much he hates his girlfriend of ten years. The hook actually goes like this: “I hate you. I hate you. I swear I do.” Trust me, it ain’t pretty.

Safe to say that the lyrics on “Y’all Know” take a backseat to the beats. The real star of this show is Mad Chemist, who produced 12.5 of the album’s 14 tracks (he co-produced one). His club-friendly tracks are the only ingredient that really kept me interested throughout. His production wouldn’t at all sound out of place on any of today’s top-selling rap albums, with a sound that seems influenced by people like Scott Storch or Mr. P Diddy. Keyboards, drum loops, and explosive bass make for beats that are engaging once, entertaining twice, and disposable after that. Bubblegum beats really â€“ good clean fun for a minute, but they won’t stay with you for long.

“Y’all Know” is a decent album, but it won’t be taking the world by storm. Give it a listen if you just need something to bump in the background at your house party, or if you’re looking for some of that brainless, Big Truck Shit. Good for what it is, but nothing more.