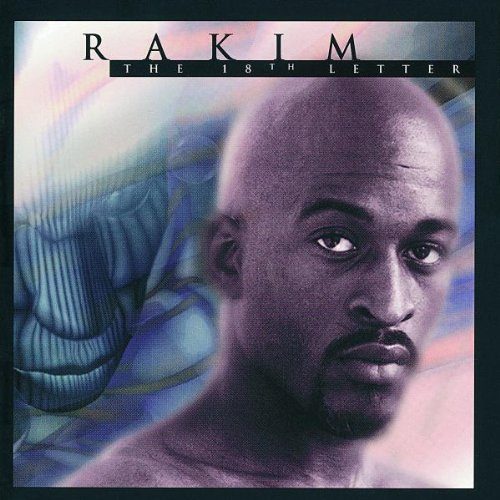 There is a special aura around Rakim that makes him one of hip-hop music’s elite artists of all-time. As a fan of the music, it is impossible to disregard any one of his masterworks with Eric B. as nothing less than classic. Of course the root of this high regard is result of a few key elements: Superior quality control, distinctively important lyrical content (“In the Ghetto,” “Casualties of War”) and the ushering in (and grand influence) on the “golden age” of the genre (mid 90’s). “Don’t Sweat the Technique,” his last work with his producer protÃ©gÃ©’, left us waiting for more from the microphone fiend. In late 1997, when Rakim released his debut solo outing the expectations were high, but also it seemed built for failure as the chemistry with Eric B. seemed unparalleled and unmatchable. In order to deliver to the masses the great talent of Rakim enlisted the help of some of New York’s finest producers to drudge up some uncanny beats for “The 18th Letter.” Finally, after a five year hiatus, we got a fantastic release that was nearly everything we could hope for.

A quick note about the release of “The 18th Letter” is that it was a double disc; the first of which being a blue CD with Rakim’s profile that is the new material, whereas the second red CD was a retrospective look at some of his early celebrated work. Sort of a 15 track greatest hits, which made this a necessary purchase for those that did not already own those classics. The purpose of this review is to evaluate only the material that was brand new at the time.

The title track sets the bar for the album extremely high right from the get-go. A lesser known producer drops a banging beat that is complimented with a soaring female vocal sample and slick DJ scratches. The backdrop merely gives Rakim a great opportunity to show off his stellar lyrical dexterity and trademark baritone voice. Lines like, “From a compound, to the anatomy, to the breakdown of an atom/Some of my rap patterns, still surround Saturn,” and “I was always the flower, I made waves for Noah,” further prove his higher mental level than nearly any rapper that dares to doubt him. It is the type of track that shows that it is not blasphemous to compare yourself to God, if you can back it up–it is certainly an elaboration, but it is also a kind of unequivocal confidence that proves successful in a brand of music as competitive as rap (hey, it works for Hova).

DJ Premier, the best rap producer of the 90’s, perhaps ever, comes through for two of the album’s top gems. First, “It’s Been a Long Time” brilliantly samples a previous Eric B. & Rakim joint entitled “I Know You Got Soul” and “Call Me (Come Back Home)” by Cecil Holmes. This jazz-infused joint is certainly one of the tracks that has aged extremely well and would be a refreshing sound in today’s muddled scene. Rakim realizes his deep importance to the prevalence of hip-hop when he unleashes his first couple of bars:

“Follow procedures, the crowd couldn’t wait to see this
Nobody been this awaited since Jesus
Who wouldn’t believe this? I heard the word on the street is
I’m still one of the deepest on the mic since Adidas…”

Simultaneously, the mastery of his words discuss the strengths of his endeavors from the past, present and future. This is what makes him a special artist. Primo’s second offering is almost as strong of an effort. “New York (Ya Out There)” incorporates a more raw sound to create an atmosphere for one of the quintessential New York rap anthems ever. The song was later featured in the soundtrack for the film “Boiler Room.”

Not to be out done, other greats like DJ Clark Kent and Pete Rock joint the fray for some excellent additions. Most notable are “The Saga Begins” by Pete Rock that is a slower more ominous tone than the album’s standard, as it borrows partially from a Mobb Deep cut. Meanwhile, Kent’s “Remember That” excels in creating an atmosphere for Rakim’s reminiscence of his earlier days and own come up.

The most brilliant work on the album is also the most conceptual piece. “Mystery (Who Is God?),” an epic track of epic proportions, finds a wise Rakim pondering his God. The first verse is sort of a big bang perspective about how the galaxy was created:

“In eternal blackness, in the midst of the darkest night
Proteins and minerals, exist within specks of light
Solids liquids and gases, and sparks of light within
infinite lengths and widths and depths and heights
No beginning or ending, the seven dimensions
Enough space for more than a million words and inventions
To travel through time within enough room to be the womb
of the most high’s great mind which he will soon make shine
With intelligent elements in sight that he will gather
In the realms of relativity electricity struck matter
Energies explode he below to keep releasin
Atoms by the millions, til the numbers increasin
Til it was burnin he kept returnin itself to the source
The hotter his thoughts it gave the center more force
He gave birth to the sun which would follow his laws
All caused by his mental intercourse, who is God?”

It may not be the most entertaining song on “The 18th Letter”, but certainly it is an extraordinary interpretation of artistic merit.

The album closes with a few remixes of “It’s Been A Long Time” and “Guess Who’s Back.” This encore finale’ is an unnecessary diversion, as both are fine in their own right, but do not build upon the top notch originals.

There is no major point of discouragement on “The 18th Letter.” Arguably some of the beats get a bit repetitive as many share the similar scratches and soulful vocal samples, but the ingredients work so well that it hardly gets mundane. Some hardcore fans may argue that there is not enough variance in subject matter to make it an undisputed classic.

Since this assuring debut solo outing from the legendary Rakim, he has only released one subsequent official release of new material, which was two years later in the form of “The Master.” While “The 18th Letter” succeeded in sales, “The Master” fell off. The disc tried to incorporate a lot of the production team of this storied album but was a mixed bag in terms of overall quality. Thereafter, Rakim always seemed to be some high expectation in the distance, as major labels (like Aftermath) have picked him up creating excitement within the rap community only to be disappointed to find that Dr. Dre decided to can the project tentatively titled “Oh, My God.” Still, he plans to release the material under a different name, “The Seventh Seal,” when the time is right. Despite these trials and tribulations of the industry, Rakim has maintained with occasional cameos (“Addicted”, “Classic”) to maintain that sense of excitement. Fans were also treated to a disc in March of ’08 called “The Archive: Live, Lost & Found” which is mostly a compilation of live performances and unreleased/rare material, of which the first four tracks were brand new and pretty darn good, too.

Rakim is a genuinely important part of hip-hop history. His sheer ability to compound the complexities of his lyrics into audible excellence has been proven time and time again. As a solo artist, it seems that the masses have been constantly waiting for him to push forward after he wet our appetites with this very nice album.