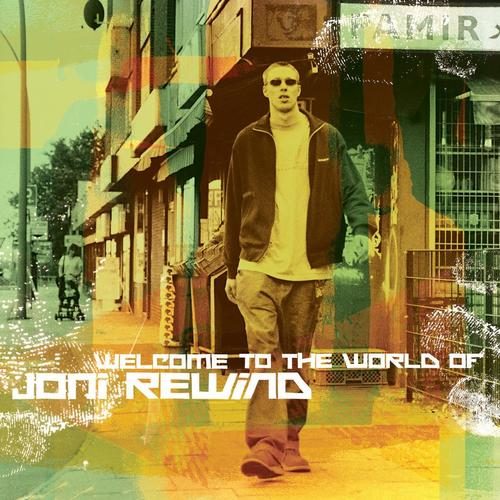 Joni Rewind :: Welcome to the World of Joni Rewind

Credibility. It’s a big word. How do you earn it? Is it worth it? For some reason, credibility is a term that carries quite some weight in music, especially rap music, where it often turns up as ‘street credibility’. While I don’t deny the importance of street cred, it sometimes seems absurd that a musician’s credibility should depend on anything else than his ability to make good music. Something which Joni Rewind is clearly capable of. If you define credibility differently, “Welcome to the World of Joni Rewind” will test your limits on various levels: a) it’s the album of a German DJ/producer, b) it contains rap as well as ragga, c) it predominantly features British and Jamaican talent. Which is exactly what makes this album stand out.

As a member of Germany’s hip-hop act Dynamite Deluxe, Joni Rewind, also known as DJ Dynamite, enjoyed considerable success. Then, after just one album, his rapper went solo. Not wanting to end up another music biz casualty, Dynamite hooked up with London DJ Big Ted (whom he had first met at a DJ gig in Hamburg and later toured with on a Blak Twang/Dynamite Deluxe ticket in 2000), who subsequently introduced him to UK heads like Rodney P, Mystro, Karl Hinds and Est’elle. They all ended up on “Welcome to the World of Joni Rewind”, alongside the essential Blak Twang.

The Jamaican names featured on this CD are even more impressive. There’s Junior Reid, Capleton, Merciless, Kulcha Knox, Jahmali and Jah Meek, who himself spent a great deal of his career in Germany. Fellow countrymen of Joni’s are Phantom Black and D-Flame. The latter, although born in Germany and mostly known for his raps, has close ties to reggae and dancehall, being a part-time member of various German sound systems. Representing the US we got Boot Campers Cocoa Brovaz who hook up with London’s legendary Rodney P on “Rude Boy Link”. The only artists who seem out of place on this album are those I was especially looking forward to: New York’s Diamond D and Lord Finesse.

Which is kind of the point of the whole thing. This is not your stereotypical Primo beat-emulating, New York streets-simulating foreign rap album. Although admittedly a personal statement, “Welcome to the World of Joni Rewind” offers a quite accurate glimpse at the global rap and reggae scene by a producer who is still deeply rooted in hip-hop. It’s more than just a European thing when suddenly a lot of recent trends and recurring tendencies seem to converge on one record. There was a time when UK hip-hop was more influential to German hip-hop than anything else. To a degree, this album still testifies to that. On the other hand, today’s mainstream audience in Germany seems to appreciate Jamaican music, which finds its way into the charts with local acts such as Gentleman, Patrice, Seeed or even pop idol Sascha. Across the channel, the Caribbean influence has always been strong in UK rap, starting with pioneering groups such as Demon Boyz, Asher D & Daddy Freddy or the London Posse. With an ex-member of said Posse, Rodney P, starring on this album, we get to witness the ongoing re-birth of UK hip-hop live & direct. And when Est’elle covers Althea and Donna’s “Uptown Top Ranking”, the first ever Jamaican song to reach the top of the UK charts in 1978, the last piece falls into place.

Keeping it indeed “strictly roots,” “Welcome to the World of Joni Rewind” will appeal to listeners who have always felt the strong bond between hip-hop, reggae, and dancehall. This one is all about the music and the positive vibes it can spread. Nobody says it better than Junior Reid in the opening “Dubplate Intro (Pull Up)”, but due to my shaky knowledge of patois, I’ll go with Blak Twang on “Madness (Joni’s Theme)”:

“It’s all about musical vibe on a track
it doesn’t matter
if you’re a DJ, a singer, a rapper
a thug or a backpacker
roots, lovers, cultural, ragga
bald or dread, Rastafarai
dumb or a smart guy
a drummer/guitar guy
there’s no music apartheid
We live this to the full while others workin’ it part-time”

Through his dubplate-spinning alter ego, DJ Dynamite clearly shows that he is someone that is workin’ it full-time.