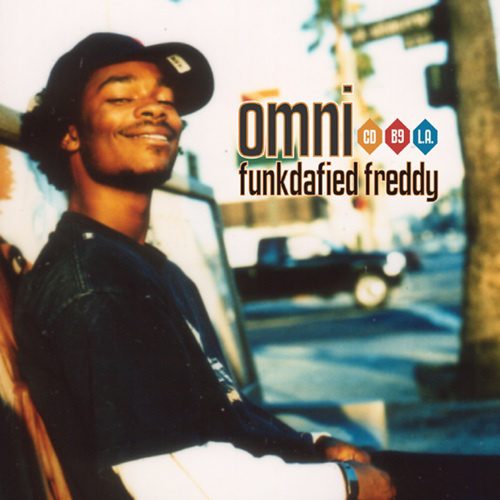 Omni’s first full length album has the kind of party vibe that was prevalent on almost every rap album from the early 1990’s, when good times were a celebration and not a privledge of the wealthy. In 2002, Omni’s lyrical style and flow comes off as one part Del, one part Ludacris, the best of each combined to create a rapper who could easily become a hero among his friends.

“FunkDafied Freddy” sounds like an instant classic, the kind of album that would have been celebrated as a classic ten years ago. There’s a hint of lyrical wisdom in “Hammerdance”, where Omni is confronted in different situations and the Hammer dance becomes a part of an embarrassing truth or dare. Then he turns around with “Coca Cola Classic” where he and Mole both walk and talk the pimp strut. A few minutes later, he’s getting in-depth and complex with “Jointventure”:

“It’s like circus clowns, freaks each with odd jobs
products of their environment, driven by cattle prods
I move about my course of life just like bishops on the chessboard…
everything is everything, my model is whatever happens
that way of thinking justifies my actions
psychosis, any antonym is bogus
prognosis: your perception’s out of focus
diagnosed with the hopeless, check the symptoms”

Within these first two verses, there seems to be a hint of hope in his voice, but the dark groove of the second half, where the song switches to another beat, gets even more intense, and one wishes the song could have continued for at least another minute or two.

“I Don’t Give A Fuck” confronts the people who feel they have an ego worth bragging about, yet in “Whatsup” Omni plays with the pimp mentality and finds his own ego is in competition with others. “Chess Champ” takes on the chessboard discussions already touched on in “Coca Coca Classic”, but in this case the pieces being moved are us, whether it’s the government who manipulate us in their own way, or our own consciousness keeping us in the position we hold ourselves in. The abrasive beats and guitar and horn samples (produced by ABCDEFG) fit Omni’s rough lyrics perfectly, and they both enhance each other to a blend that works very well.

An album like this, where the subject matter jumps around, might have been passed off as someone who doesn’t know what direction he wants to take. Omni balances this, and neither side (the party side and the conscious side) finds it being a threat from the other. As he states on the album’s outro, the next time you hear him he’ll be on some “whole other shit”, and knows that with growth and learning, there will be more experiences to be had, all of which will come through in his music.