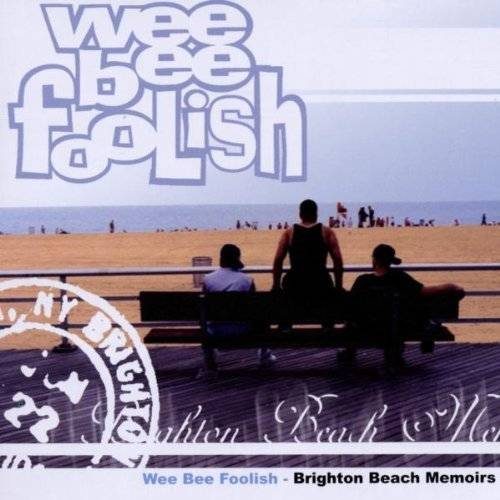 Yeshua DapoED has credentials in the world of indie hip-hop that many live and die for but few ever get. He’s earned his way into underground’s elite with his own excellent singles, guest appearances, and the hip-hop classic “Visualz EP” he co-authored with another indie rap favorite by the name of Siah. On one of that album’s tracks we got our very first taste of the future group Wee Bee Foolish when Ken Boogaloo made a guest appearance on the song “Glass Bottom Boat”:

“We be in the mix, it’s time to build
With rhymes I swell skills you get your mind swelled
Design lines filled with logic the objects
That the God gets styles from the burbs to the projects
Universally my verses be touchin kids from nursery
to universities, you heard of me, Boogaloo
Comin off like burglary, personally I murder trees
That leave my eyes burgundy, word to me
So peep the baddest in action apparatuses waxin
Definite satisfaction, heads be fakin Jacksons like Janet”

At some point Yeshua and Ken obviously realized they had natural charisma together, and formed Wee Bee to exploit that first with some 12″ vinyl classics and now with the full length album “Brighton Beach Memoirs.” But perhaps Yesh himself explains it best on the DJ Bless produced track “Whatcha Need”:

“Took a couple of years to get over my fears
Stood up, every night to write rhymes ’til there was none like mine
Drink a couple of beers, some beats up in my ears
And you could find me in the cut spittin all the right lines
In due time, me and Ken bumped heads
And formed the Wee Bee (Foolish) – nuff said!
What head could find a reason to front,
if the crew is tighter than the way you roll trees in a blunt?”

Besides doing all of the cutting and scratching, Bless provides a lot of the audiophonic dopeness throughout — “Energy”, “This Kid”, “La Calle (The Streets)” and “It’s Only Right” at the album’s close along with several tight interludes. Yesh has skills behind the boards as well, as he laces the jazzy bass of the oddly compelling “Triplets” (as Project Blowed as anything the East coast has seen) as well as the vintage 70s-esque “Funk Keeps B”, the speedy “PimpFloMein” and the lead single most heads have already heard – “The Main Attraction”:

“The breeze and the moonlight feels too bright
It’s time to meet your crew, it’s goin down tonight
You can hit the club for the kind of shit you love
Find a chick to rub up on
Stuck on drinkin so you’re thinkin of a pub
The local bar scene might mean whylin out like you’re 19
all over again, I know it depends
on whether or not the spot is hot if you go there again
Your girlfriend said, go witcha friends!
And that means you’re free to get totally bent”

What works best about “Brighton Beach Memoirs” lies simply in the confidence of the members to write good rhymes and of whoever is doing the beats (them or someone else) to provide the butters to flow over. Their confidence leads to consistancy that means the entire album maintains a consistant level of dopeness, although individual tracks like the DJ Eli produced “Properly Done” or Yeshua’s tribute to Q-Tip in the mix of “Turn it Out” still stand out as gems. While a lot of underground artists and groups can produce one or two great vinyl releases and then flop or dissapear, Wee Bee Foolish proves with this album that their reputation was not a fluke and neither is this LP.