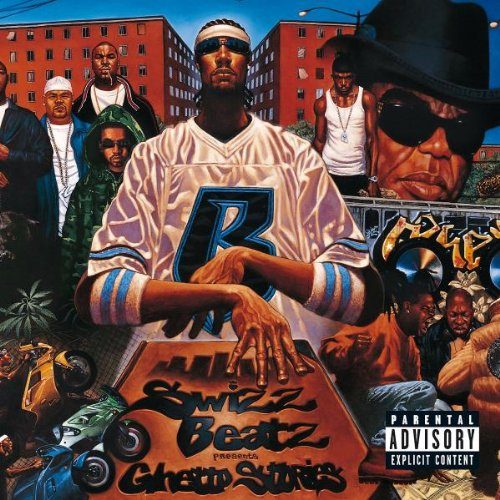 Eclectic. A little left of center. Out there. These words could easily describe the roster of the upstart label DreamWorks Records, who since re-releasing an upgraded version of Kool Keith’s “Dr. Octagon” album in the late 90’s has encompassed a roster of everyone from Alien Ant Farm to Nelly Furtado to the Isley Brothers. More recently though the imprint has been trying to gain a foothold on urban charts with artists like Jerzee Monet and Floetry, and has also become home to much-delayed and and finally released Swizz Beatz album “Ghetto Stories.”

Eclectic, a little left of center, and out there could also describe the producer Swizz Beatz himself. At times his bizarre methods of creating tracks for raps has drawn ire in the hip-hop community, some from this writer as well. “Money, Cash, Hoes” by Jay-Z had to be one of the worst examples of production in history – it sounded like someone jumping up and down on top of a keyboard and saying, “Let’s slap a beat on that.” Then again, his relentless approach to trying anything on the boards has created some songs with the Ruff Ryders that are as much his as those that rap on them: “What You Want” by Eve, “Party Up” by DMX, “Down Bottom” by Drag-On and the epic “WWIII” among others. There’s a gutsy fearlessness to a Swizz Beatz track that can only be summed up one way — when it works it’s a certified hit, but if it doesn’t BOY DOES IT STINK.

“Ghetto Stories” strives to avoid bad odors and come up smelling like roses, and for the most part it succeeds. Of course it never hurts to have good guest stars if you’re producing a rap album showcasing your chops, and Swizz brought in an impressive arsenal. Jadakiss and Ron Isley duet on the wavering melody of “Big Business,” Busta Rhymes is a menacing verbalist on the puglistic “Endalay”, LL Cool J and Mashonda duet on the pleasantly smooth “Ghetto Love” and even Lil’ Kim shows up for her monster track “Gone Delirious.” If anyone doubted about her being N.Y.C.’s dominant female MC, she’s squashing that here:

“I got moves in this game, the other chick is a fraud
I’m important — like the queen on a chess board
Bitches talk slick, but they ain’t got nuttin for me
When I’m in they terriotory, it’s a whole ‘nother story
We never get stuck, sometimes we take the long route
When our back’s against the wall, we bang our way out
I’m in the gettin money mode, livin by the street code
Bout to have, every corner of this rap game sewed
Hey hey – you homies better start, showin some respect
Or get slapped silly — heard my man G. Dep!
Hey hey hey – quit tryin to holla at the bee and you think you fly
Impress me dog, throw some money in the sky!”

There are a few miscues to be found here and there. The simplistic raps of Swizz on the title track prove that he belongs in the studio and not in the booth. Dawg, put down the microphone, PLEASE. And if the re-inclusion of Styles “Good Times” wasn’t questionable, the fact that it’s a mix which leaves out the sample in his chorus screaming “I get HIIIIGH on your memory” definitely IS. For some reason, N.O.R.E.’s self-titled track doesn’t have his usual powerful impact – maybe he really IS a muh’fucker who shows people how to rhyme on Neptunes beats. I’m also not feeling the pairing of Baby and Yung Wun on “Let Me See Ya Do Your Thing” – it puts a label exec who HIMSELF is barely a rapper, and a slow flowing one at that, on the same song with an MC who is so loud and tyrannical he needs tranquilizers to chill.

The one track that may leave everybody scratching their heads though is probably the best example of how Swizz refuses to play by the rules. I couldn’t begin to explain how in de hail he talked METALLICA and JA RULE into being on the same track, but “We Did it Again” is surprisingly good. Ja Rule has already professed to be a “Rock Star” on his last CD, so in a way this song makes perfect sense; and despite some crossover from their hardcore days in the 80’s and early 90’s Metallica is still capable of laying down some of the crunchiest riffs in metal and rock. Hetfield and Rule alternate belting out the hook, with James yelling, “MORE THAN THIS! NEVER MORE YOUR WHIPPING BOY” and Ja exhorting him to get LOUDER before singing, “YEAHHHHHHHH, WE DID IIIIIIIIT, SCREAM!!” In an album of rap oddities it may be the oddest, but it actually succeeds in achieving what Rule claims in the song: “Who loves a little rock’n’roll, mixed with a little bit of hip-hop soul? WE DO!”

In a way, this album actually sounds like a New York mixtape, except without the barrage of no-name gangsta rappers and mediocre wannabes with half-assed gun clap rhymes. It’s hard to be mad at tracks like Eve’s bouncy “Island Spice”, the brutal booming bass of “Guilty” with Bounty Killer providing slackness, a “Salute Me” remix featuring Nas, Fat Joe and Cassidy or the “Bigger Business” bonus track which brings on a long list of guest stars (Snoop Dogg and TQ among them). Those who were skeptical about Swizz as a producer may make the unintentional mistake of skipping this album in stores, but it proves that whether his technique is right or wrong Swizz Beatz can still produce banging rap tracks with the best of them. Don’t sleep.