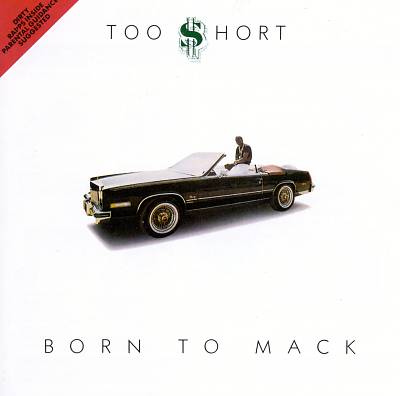 Making his major label debut with “Born to Mack,” Todd Shaw a.k.a. Too $hort was already well known to a concentrated fan base in and around Oakland, California. Signed to the local indie imprint 75 Girls, $hort had already been hustling his rap tapes out the trunk of his car, featuring now legendary songs like “I Don’t Stop Rappin'” and “Wild Wild West.” This third album was where things really took off for Too $hort though. With local friend and artist Freddy B, Too $hort formed the label and partnership Dangerous Music and recorded “Born to Mack” as a direct to the streets release. With 50,000 units sold on their own, the album blipped on the radar of New York based Jive Records, who decided to take a chance on $hort and sign him to a major label deal.

Soon after the ink was dry on the paper, “Born to Mack” was re-released to a nationwide audience. At first they may not have known what to make of the boisterous, vocally Oakland tinted, shit-talking pimp – but “Freaky Tales” would make them take notice. At almost nine and a half minutes long, it was an epic “Tale” indeed; worthy in length of the uncut “Rappers Delight” by the Sugarhill Gang. But guess what, America, $hort loves hoes. That’s right, he wants the poontang. He wants to slap the cat until the pussy begs for some milk. If that’s too explicit for you, don’t even bother to read from the verse quoted below:

“I met this tender, her name was Lori
An X-rated movie wouldn’t tell her story
She had a twin sister, her name was Lisa
And just like Lori, she’s a real dick pleaser
My girlfriend’s name – was Michelle
Her booty was bigger than a tale on a whale
When I freaked Michelle, I freaked her well
Her pussy got hotter than flames in hell
I G’d this girl, her name was Tammy
I didn’t wanna do it cause the bitch was flammy
She had a best friend, her name was Jane
I pulled her the side and I spit that game
I met a lot of freaks in my lifespan
Freaked one night with a girl named Pam
The very next day I saw her with her man
One week passed and I was in her again
I had an old tender, her name’s Janine
She was thirty-two and I was only eighteen
She likes to freak, she’s just a fiend
It really didn’t matter when I saw her in jeans”

It wasn’t just the raw sexual escapades of “Freaky Tales” that caught the attention of the hip-hop nation, it was the big round bass that eptiomized a whole new sound of West coast rap that would eventually infect the whole rap nation. As tight as the hard drum sound of LL Cool J and Boogie Down Productions was, it was time for something with a little more rattle in the trunk. This was a song for the subwoofers, the lowriders, and the house parties where people liked to shake it to something slow, dirty, and just plain NASTY. Produced by Shaw himself and T. Bohanon, mixed by Shaw himself and Howard Johnston, the album still wouldn’t have had that boom and pound without the incredible 808 programming by Silky C. Their work together throughout the album produced songs that spread far and wide beyond Oakland, like the aptly named “Dope Fiend Beat”:

“Fuck you, stupid hoe
Tell me just what you know!
I came to the party and turned it up
You say: ‘Ooh, he’s got a dirty mouth!’
But, beeeeitch, I kept talkin shit
Motherfuck you, damn shit-head bitch
I wanna blowjob and I’m not kiddin’
Work it in your mouth till your head starts spinnin’
I’m that nigga you’ll answer to
If I say: ‘Bitch, jump!’, that’s what you do
I’m a fast talkin con-man blowin your mind
Breakin you and yo’ cousin at the same time
With my, dirty rap comin out my mouth
And you know damn well what I’m talkin about
I’m the Too $hort, baby, way too cold
So motherfuck you bitch, God damn asshole”

Too $hort fans will recognize in these songs the basic roots of the rap he’s been busting for two decades since. The catch phrases, the nasty talking, the unbridled (and to many offensive) misogyny and a fearless reluctance to make pornographic movies and 2 Live Crew records sound tame by comparison. This was not a flawless debut though. Despite having been on the scene for more than a minute and already having a polished flow and precise breath control on the beats, the kinks hadn’t been worked out of the production. “Partytime” is embarassing really – it sounds like a song shoved down $hort’s throat by the Bomb Squad in their “Yo! Bum Rush the Show” days, without even that release’s charm. “Playboy $hort II” is better even though it’s introduction clearly rips off “Sucker M.C.’s” by Run-D.M.C. $hort’s dirty rap and the album as a whole function much better on songs that have that trademark Oakland funk; songs like the explosive “Mack Attack” and the over six minute long underage sex epic “Little Girls.” $hort’s clearly admitting he has the desire to get with a young tender, but he’s no fool either and warns there can be consequences for reckless behavior:

“I see you more than baby, it’s more like hell
You screw a little girl and end up in jail
Even though she seems she’s 19
You’re looking at her body and it’s breakin the jeans
Well you know she’s not, so don’t play dumb
Little girls walkin round trying to give me some
[…]
You could have fooled me baby with your lying scheme
Said you worked in the mall and just turned 18
When it came down to it, I couldn’t go through it
It’s all so sad cause you wanted to do it
Little girl, you want to have some fun
You’d better wait a few years cause you’re much too young
Stop playin games, you might find a guy
Who will like you for yourself, not for all your lies
So I put it like this, and I don’t play
If I see your young ass, I’m not goin your way”

Only eight songs deep but clocking in at over fifty minutes long, Too $hort’s “Born to Mack” was an impressive if somewhat uneven introduction to the big time for the up and coming rap star. His independent label records got him the start, but this was the album that clearly put him on the map and got people wondering what was next from the provocative, sexually explicit, yet frankly honest and street smart rapper. No one could have guessed back then that $hort would go on to be one of the most prolific, longest enduring rappers in the whole game, but $hort must have known when he recorded “I Don’t Stop Rappin'” way back in the days; quite frankly he never has and it’s doubtful he ever will.