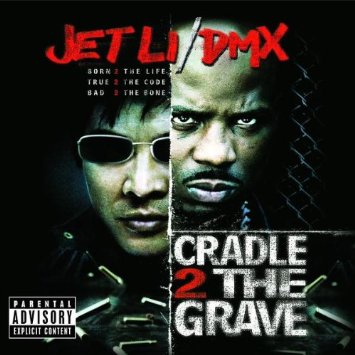 Hollywood is nothing if not predictable. In big budget movies, they love to pair opposites together. Mel Gibson and Danny Glover. Chris Tucker and Jackie Chan. Eddie Murphy and Steve Martin. And the bigger hip-hop gets, the more Hollywood tries to co-opt the music’s success by having it’s biggest stars in feature films. DMX is one of rap’s most popular MC’s, and his menacing presence in the otherwise lackluster Hype Williams vehicle “Belly” has led to a slew of follow-up roles; so many that some heads may now envisage him as an actor more than a rapper. Despite relatively mediocre reviews for his 2001 action film “Exit Wounds” with Steven Seagal (remember, Hollywood loves opposites) the establishment is obviously banking on him to do big things in “Cradle 2 the Grave” with Jet Li (formula formula formula).

DMX is also putting his own credibility on the line by having his Bloodline Records imprint co-sign with Def Jam on the release of the CD. Ordinarily if a movie flops a rapper can forget Hollywood and go back to hip-hop (see LL Cool J, Ice Cube) albiet with some skepticism on the part of their fans. DMX has much more at stake – not only is he the star of the film but the impetus behind it’s soundtrack as well, and he appears on four of its tracks. If the movie AND the album flop, DMX has serious problems in his future; let alone the survival of his record label. He executive produced the CD – at the end of the day who can answer for it BUT him?

Despite the amount that’s on the line DMX was not afraid to take a few chances with the album, and that definitely works to his advantage. Newcomers Bazaar Royale are surprisingly nice on the Shatek King produced “What’s it All For?” Harmonizing as much as rapping, the group is supported by a crunchy guitar backdrop that can shock for blocks from hip-hop to hard rock. Putting CNN and M.O.P. together on the Tony Pizarro laced “Stompdashitoutu” is a natural – bringing the hardest of Queens and Brownsville together on a non-stop rambunctious gun-fest. Clipse normally rock to Neptunes beats, but don’t sound at all out of place on EZ Elpee’s “I’m Serious” – if anything, it gives Pusha T and Malice a more menacing edge. Even up-and-coming Def Jam rapper Jinx Da Jivy gets his time to shine with a solo instead of a cameo on the song “Off the Hook”:

“Dips wear fitted, too exquisite, enemies lord forgive ’em
More shells in the clip, the more hit ’em
Go with his body blood draw drippin, send him to the mortician
Face it I’m hot, the boy gifted
Look listen, the game’s in a boston crab
I’m just a bastard who’s born to rap
Hot on the beat slaughter the track
I’m here to kill a whole industry, I don’t get along with rap”

There are also some tracks where DMX is clearly playing it safe, but not in a way that one would find insulting. He appears on the Eminem produced and starring “Go to Sleep” along with Obie Trice, and they all get a whole verse to shine. Given 50 Cent is on Eminem’s Shady Records imprint along with Obie, it’s not surprising that he and his G-Unit are on this album too on “Follow Me Gangster.” The R&B/urban contemporary audience is given “My Life (Cradle 2 the Grave)” by Foxy Brown and Althea to tide them over, and the crossover hip-hop heads will undoubtedly enjoy Baby’s “Won’t Be Coming Back” and the DMX lead single “X Gon’ Give it to Ya”:

“Knock knock, open up the door, it’s real
Wit hthe non-stop, pop pop from stainless steel
Go hard gettin busy wit it; but I got such a good heart
that I’ll make a motherfucker wonder if he did it
Damn right and I’ll do it again
Cause I am life so I gots to win
Break break wit the enemy; no matter how many cats
I break bread wit I’ll break who you sendin me
You motherfuckers never wanted nuttin
but your life saved, BITCH and that’s on a light day
I’m gettin down, DOWN, like a nigga said FREEZE
But won’t be the one endin up on his knees
Bitch please! If the only thing you cats did
was came out to play, stay out my way – motherfucker!”

Like most hip-hop soundtracks of recent times though, the album still bogs down on a plethora of mediocre cuts. Joe Budden is no more interesting on “Drop Drop” than on the endless New York mixtapes he appears on. Ruff Ryders member Big Stan was probably owed a solo cut for his loyalty to DMX, but “Hand That Rocks the Cradle” is cliched both in title and in it’s lyrical gangster bravado. The normally reliable Fat Joe is almost missing in action on “C2G,” mostly due to too much mic time by the poorly named Youngn’ Restless (isn’t that clever). Don’t expect anything from Kashmir on “Focus” either – she’s just another female rapper who is far too eager to prove she’s the “baddest bitch” in rap.

Taken as a whole “Cradle 2 the Grave” is about par for most compilations, soundtrack or otherwise, released in the last twelve months. With a few nice surprises like a rejuvenated sounding Drag-On appearing on “Fireman” or newcomer Profit on the well produced Kato track “Slangin’ Dem Thangs,” this soundtrack is slightly better than most. It’s not an overwhelming success, but it’s good enough to ensure that DMX fans won’t be calling for his head if the movie tanks. X can apply the lessons learned from this soundtrack and hopefully come up with a better one for his next film; starring Tommy Lee Jones or Jim Carrey (formula formula formula).