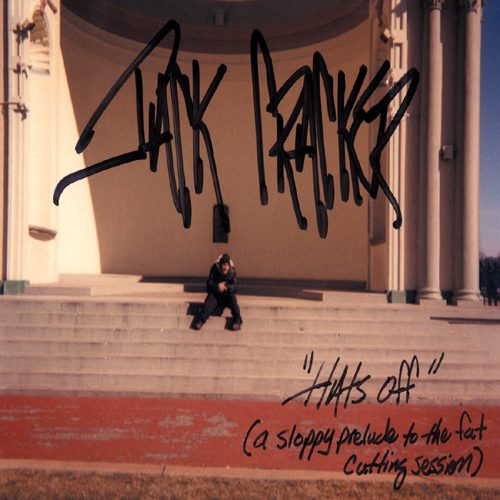 In the simplest terms, writing a record review is to give an account of what you heard and what you think of it. Which is often easier said than done. Hip-hop albums don’t come with instruction guides. Sometimes you will have a hard time putting all the pieces of the puzzle together. Not all rappers tell you as directly what they’re about as the ones on MTV. Not every album’s success can be traced on Billboard. Not every artist’s bio can be looked up in the All Music Guide.

Enters Jack Cracker from Madison, WI. Having already made a name for himself alongside his brother AD as a member of the group The Crest, he embarks on this solo mission entitled “Hats Off”. After some pointless phone messages, Cracker is ready to let the words roll off his tongue, and roll they do indeed, his clear diction setting him already apart from the slurred speech many of his indie contemporaries exhibit. Lyrically, it’s all similes, metaphors and references. But as many as there are, they largely revolve around the Jack Cracker persona. From “my shoeless approach has been banned from the game like Joe Jackson” to “refuse to get rode around for nothing more than a horsehead on a stick.”

While “The Beginning” is just an introduction to his M.O., he spreads it out all over the rest of the tracks. Familiar characteristics such as battle rhymes and wordplay are interwoven with more odd observations. If you ask if Jack Cracker is an abstract rapper, then the answer would be probably yes, in the sense that it seldomly gets clear what exactly he is talking about. Zoom in on the lyrics and a particular line’s meaning is clearly apparent, but zoom out again and it all becomes a mystery. Ultimately, there’s only so much sense you can squeeze out of poetic outpourings like “please don’t disturb the well-written kitten turned tiger / spittin’ fire-formulated furballs, then zip my fly up.”

At times coming off like an unfocused Ras Kass, Jack Cracker seems like the prototype of a rapper bent on pushing the boundaries. Clearly not simply rhyming for the sake of it, he gets props for not following the same ol’ formula, yet his own recipe still tastes somewhat funny. “I’ve done this to numbness,” he says on one of the more battle-eligible tracks, possibly referring to tracks like these. Still, his own artistic vision remains blurry. Then again, it might all just be a mind game that Jack Cracker is playing with us: “Appearances may be what is wanted for you to perceive / occasionally leaving something upfront to divert attention from a ace up a sleeve.”

No reading between the lines is necessary when it comes to the beats. Production duties are split between Mideast Productions, Bees Wax Productions and Myron Mayhem. “The Beginning”, “Six” and “Stopwastingyourbreath” could have done with a better balance between the tense melodic background and the bottom-heavy bassdrum. “Feel It” and Mind Set the Rhyme” exude that homemade, keyboard-conceived charm, but end up atmospheric pieces of music nonetheless, topped only by the delicate “Superimpose Yourself On This…” which fuses a sensitive guitar with some suspenseful strings. “Hats Off” on the other hand pairs an angelic flute with a very concrete rhythm backing. Unfortunately, “Jack and Mic Virus” shamefully neglects anything besides the rhymes, featuring a dull chorus and a beat that doesn’t even pretend to have a life of its own. The only real surprise musically comes in the form of “On Your Way Out…” which quite successfully emulates the Jay Dee sound, circa ATCQ’s “The Love Movement”. So basically, there is indication in the music as well that “Hats Off” isn’t yet the final result of what Jack Cracker can achieve.