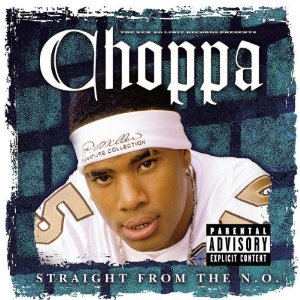 Choppa :: Straight From the N.O.

Having made a small (possibly unnoticed) national debut on the 504 Boyz’ album “Ballers” released last year, Choppa is clearly looking to make a bigger impression on the hip-hop nation with “Straight From the N.O.” The title may be slightly misleading though, because Choppa is actually repping for the Marrero area, a hood he undoubtedly hopes will become as well known as Compton and Queens are.

The upstart rapper certainly has a chance to make that impact. The first genuine talent to emerge from the “New” No Limit Records, Choppa’s similarity to a former Cash Money superstar is a startling coincidence. It starts with his growling voice, extends to his polished breath control, and finishes with his strong Louisiana accent. Some may incorrectly accuse him of being a copycat or Johnny-Come-Lately as a result, but in any genre there’s got to be artists who sound like each other now and then. Choppa clearly recognizes some people aren’t going to get it though, so he sets the record straight for them on “Hatin'” and even shouts out the artist in question in the process:

“I never was fake, everything I’m spittin is real
I was hungry, I was hustlin, so I’m gettin a deal
Flippin my skill, flippin the steel, whatever it takes
I’ll put a hater in the dirt and kick a verse at his wake
Yeah I learned that from kin, when they had the streets locked
They had the heat that made you fade away, like a bleach spot
They even had little guns, sound like grease pops
And so much candy you would think it was sweet shops
Now I done shows with Jigga, smoked with Juvie
Hooked up with Ja Rule and felt some booty
Had hoes claimin that, they wanted to screw me
I’m bout my money, not bout what them bitches ever do me
Cause I’m in this to win this, so give me a mic
I’ma spin this and send this and that’s what you like
Yeah, I’ma break ’em off proper pro
Man, fuck a nigga hatin on Choppa Chop, c’mon”

Right off the bat, Choppa has qualities a lot of new rappers in the game lack. He shows a penchant for writing similies that are evocative and interesting, a wry humor even in grim situations, and an intensity overall that draws you in to listen closely to his words. Little wonder then that the first single “Choppa Style” featuring Master P has become an underground sensation. You’ve heard club songs before, but Chop still puts his own spin on this one:

“Now I don’t mean to sound rude baby or hurt ya nuttin
I want an independent woman if she workin wit somethin
I want a slim fine woman wit some twerk wit her
She ain’t gotta lot ass but I can work wit her
I want a big fine woman wit some pop wit her
She ain’t got a lot of ass but titties bop wit her
Now I, came here, to get it buck
Represent for No Limit, you ain’t wit it got to cut
We Miller’d up, in the truck, so you know what’s up
We the South, we universal and we got the clubs krunk
So put yo head, between yo’ legs, and touch yo’ toes
Bounce your booty up and down, oh girl there you go!”

With surprisingly nice production from Don Juan, Full Pack, Kenoe and Sinista among others, this album has the potential to rattle trunks. “I’mma Be Here” sets the album off right with a pounding beat, while the hardcore South fans will be happy to hear a guest verse from B.G. on the stripped down bounce of “Represent Yo Block.” Other highlights include the hand-clap and catchy chorus of “Dirty Dirty” (a strong choice for a single), the Marrero anthem song “Brick Jungle,” the big pimping “Aaahhh (Oh Yeah)” and the answer to Juvie’s “Back Dat Ass Up” in the form of “Shake it Like Dat.” The album doesn’t show any major weaknesses as a whole, which may be largely due to Choppa’s dominance lyrically (no overwhelming amount of guests) and Master P’s largely hands off approach to letting the best producers give Choppa the best material to work with (and quite frankly, no beats from P himself). You may not know the name Choppa yet, but by the end of 2003, you will.