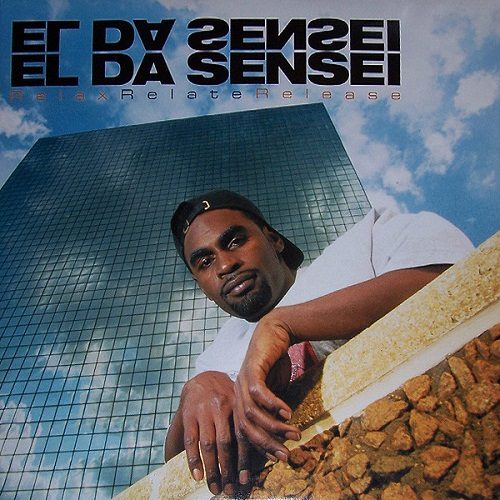 Back in the late 90’s, I felt really sorry to see the Artifacts break up. Apparently, so did El Da Sensei, the down-to-earth half of this dope New Jersey duo. On his recently released solo debut, “Relax Relate Release”, he tries to rekindle the fond memories of an era when, as Fat Beats owner Joe Abajian says somewhere on this record, “that was the hip-hop at the time, it wasn’t split up as it is now.” Those of us old enough to remember those happy days, who may even remember the Artifacts specifically, will be glad to hear that El is still down with DJ Kaos who had become an official member by the time they released their sophomore joint in 1997. What’s more, by contributing a batch of scratches, Kaos gets an amount of exposure that is rare for DJ’s these days.

In between, DJ Kaos also takes on the role of the youngster who is getting schooled on the ways of old in “Questions and Answers”, the type of history lesson that hip-hop needs more than ever. After teaching biters a lesson himself in a short interlude called “Be Original”, Kaos plays the naive but eager to learn kid discovering the wonders of yesteryear’s hip-hop music:

“Aight little man, let me tell you ’bout the days
when your favorite MC’s had no major airplay (What?)
no video, car, crib or large deals (Huh?)
only a single got you city-wide appeal (Damn!)
Showin’ your skill up on the mic, originality was key
and the law was not to bite in the highest degree (I hear that)
plus you had to battle cats for respect
(Like Moe Dee, Busy Bee, MC Shan and KRS?)
Yeah kid, it goes deeper but you get the picture
You had to have lyrics and plus hot beats to get the mixture
As always you had to have the ill DJ
technician with precision, switch the fader all day”

With the DJ on deck, all El Da Sensei has to present are the lyrics and the hot beats. Since 2002 is neither 1994 nor 1997 and El Da Sensei and DJ Kaos without Tame One are not the Artifacts, don’t expect “Relax Relate Release” to pick up where the criminally slept-on “That’s Them” left off. In most cases, the sonic boom of the ’90s East Coast sound has been reduced to a mere whisper. It made way for much simpler tracks, where melody is introduced by delicate violin chords and slick guitar riffs rather than triumphant fanfares of horns and towering basslines. Still, even if snippets of Artifacts highlights introduce this record, it can hold its own. The beats selected by El for his solo venture are definitely up to today’s standards. Switzerland’s DJ Sebb goes first, with “Relax”, a optimistic tune that supports El’s attempts to calm things down:

“‘What happened to the sounds?’ what everybody’s askin’
Guns clappin’, top MC’s clashin’
Well fuck that, real tracks at your service
no need to get nervous as you get into the verses”

Other notables behind the boards include Lone Catalyst J. Rawls who is as sublime as usual on “Speakin'” and “We Bouncin'”, or Croatia’s Koolade, who makes sure that the Sadat X-featuring “On and On” reaches further than just from the “Bricks to the BX.” He tops himself with the bouncing “So Think Again”, introduced by what sounds like Greek guitar playing intriguingly chopped up for your listening pleasure. Also coming correct is Malito, apparently a producer close to El’s homebase. You can almost feel the summer breeze on his swingin’ “Summer Time Bluez”, while “So Easily” is a very solid jazz-influenced track that can well hold his own even after the rapper has finished. P Original puts a modern gloss on the jazz formula with the funky “Eternally” and then flips the whole thing with the menacing “Focus”.

The music may be different, one thing that definitely hasn’t changed is MC El’s guttural flow that has a warm, welcoming quality. He calls it “the early ’90s flow / slam up on tracks like Booker T on Monday Nitro,” but it’s not really an aggressive delivery. The absence of his former partner, the musical changes, and most certainly personal experience may have mellowed this “Polo nigga to the death” down. But he isn’t going esoteric on us by any means:

“Flawless notorious wordsmith
much too complicated, so I’m slowin’ the pitch
to come across raw for sure so folks can understand this
uniqueness from a man whose lifestyle is quite candid
I’m hand-picked from the planet NWK
where cats get robbed on _Any Given Sunday_ with no delay”

Still reppin’ Newark, he relies on his veteran status to weigh in on the eternal battle for hip-hop’s soul:

“Many ask: what’s the purpose and my cause in this craft?
I say I’m down to make a difference, walk a righteous path
[…]
Brick City resident, activist, past and present
When you look into my eyes you see tradition and soul
styles of old, and stories that been well foretold”

At first it seems as if El Da Sensei is too occupied with the past to be concerned about the present, but as you listen to the aforementioned “Questions and Answers”, or “So Think Again”, where he warns cats to “think again before you start rappin'”, it becomes clear that this rapper is planning for the future. “Seven Heads is my label and I rep that shit,” he vows, and he makes sure he teams up with labelmates J-Live and Asheru for “Whatyouwando?” (also included is his ’98 Guesswhyld single “Frontline” featuring Organized Konfusion, Mike Zoot, and FT). With only one cut that doesn’t seem to work (“Fall Back”) and one that stands somewhat sideways to the album’s direction (“Bang it Out (The Nasty Song)”) but plenty of “nice beats” and “fresh rhymes”, “Relax Relate Release” is a worthwhile trip down memory lane and back to the future.