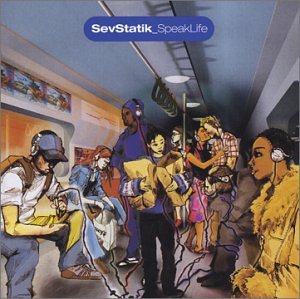 For the better part of the nineties and beyond, one of the major gripes for people who were disappointed with how hip-hop presented itself were the negative messages it seemingly sent. Anybody who’s been with hip-hop for the last five years, however, will have noticed some significant changes. Critics continue to make out negative aspects in hip-hop, but the music itself has lost a lot of its once rampant negativity. The party element has been reinforced, and depictions of violence are usually brushed over with moral issues. The girls got to dancing again while the thugs got to thinking. But the clearest sign of the changing times may be the growing number of acts with a decidedly positive mindset: Jurassic 5, Talib Kweli, Common, J-Live, People Under The Stairs, Afu-Ra, Mr. Lif, Dilated Peoples, Blackalicious, Mos Def etc.

Following their lead are thousands of unsigned and local artists just waiting to make an impact not only on hip-hop but on society as a whole. One such rapper is Sev Statik. If you let him tell it, his mission was evident from day one: “Since the first time I picked up the pen I made a promise / that everything I would drop, it will be considered conscious.” A promise he certainly keeps on his first full-length, “Speak Life”, on which he hopes to “wake the world over kicks and snares.” His message is mostly of a spiritual nature and for the most part left undefined. To the outsider, it can feel like witnessing someone worshipping a deity only the worshipper is familiar with, and once you get that feeling, it’s hard to shake it, especially in the face of rhymes like “every line focused on service / nouns and verbs hit, all for a purpose.”

In the process, the self-described “vision MC” (rather than “Christian MC”) does touch on relevant subjects and delivers intelligent statements, but on a whole, Statik’s sermon seems too self-centered without revealing much about its author. He asks you to watch him “rip down spots for the sole purpose of savin’ souls,” but how exactly he intends to save these souls remains a mystery. Just saying you will just doesn’t seem enough unless you’re already preaching to the converted. Thematically, the album gets interesting whenever Sev touches on his past life. “I explored the other side first,” he admits, “went down dark roads (…) wrong tree, wrong fruit, but I still picked ’em.”

Apparently, Sev Statik knows what he’s talking about when he says that “there’s hurt before the healing and wreck before the rescue / dirt before the cleansing and dark before the view,” but he misses the opportunity to tell us how exactly he was able to make the transition from one to the other. And so the promisingly titled “Speak Life” suffers from gospel music’s inherent flaws. When Sev claims he’s been “sent to set apart lies from the truth”, he’s mainly talking about the truth according to his religion. It takes more than that to “infiltrate the secular right to the molecular” (as one guest rapper puts it on “Warning”).

What saves “Speak Life” from being a complete inside affair are its hip-hop sensibilities. Opening up with an old school drumroll, the album creates a well balanced mix between engaging and more meditative tracks. The music rarely shines by itself, but the clean production harmonizes well with Sev’s clear voice. Unfortunately, every now and then it veers off into wackness. “Da Pointman” with its crackling noise, overtuned bass and random vocal moan sounds like a badly assembled track from the underground starter kit, the monotonous bounce of “Rock of Ages” hardly will excite party crowds and the dissonant “Globe” receives the last stab from an annoying chant serving as chorus. These are the low points of an album that despite sprinkles of static noise comes off as somewhat antiseptic.

As for Sev Statik, you can certainly expect hip-hop integrity from someone who argues: “I can’t trust those who see hip-hop solely as a business / you can live off of the culture but first you have to live it.” A “cousin to the Big Apple,” the Tunnel Rats and DeepSpace 5 member makes sure people know that “Sev Statik represents Albany NY.” One of the album’s tightest tracks, the thumping “Over the Influence” takes it back to the city’s scene, as Sev goes from battling to making remarks about the local Lah Born competition. On “Da Pointman”, he warns adversaries:

“Been trained for this competition, I compete for free
my senses are so keen, I can hear you hearin’ me
so I know the deal, gangsta, before you begin to speak
whether you agree or not with what I say, I won’t cease”

Clearly, ceasing is not what Sev Statik has in mind, or else he wouldn’t be able to recall the days of old when “every MC out was dope, there was no underground / there was no mainstream but a universal sound” and “Adidas or Pumas was like uniform / and Nikes was invisible, freestyle was the norm / and when we said ‘word is bond’ it was real / if you was a frontin’ cat, on the cardboard it was revealed.” Speaking from years of experience, he cautions upcoming rappers on the sarcastically titled “I Apologize” (which includes a very noteworthy guest worse from Listener): “It all sounds like it’s cake / till they stop promotin’ and believin’ in y’all with five more albums to make.”

Which is something that hopefully won’t happen to Sev Statik while he’s on Uprok Records. But if there are more albums for him to make, it would be nice to hear him go into more detail about how exactly his “wordplay (…) ten times purified with the fire of life” came to be (something he seems yet to shy away from, given the succintness of the disturbing “Disappear”). Because at the very heart, “Speak Life” fails to live up to its title. Nonetheless, if you’ve made it your point to support positive rappers, check for Sev Statik.